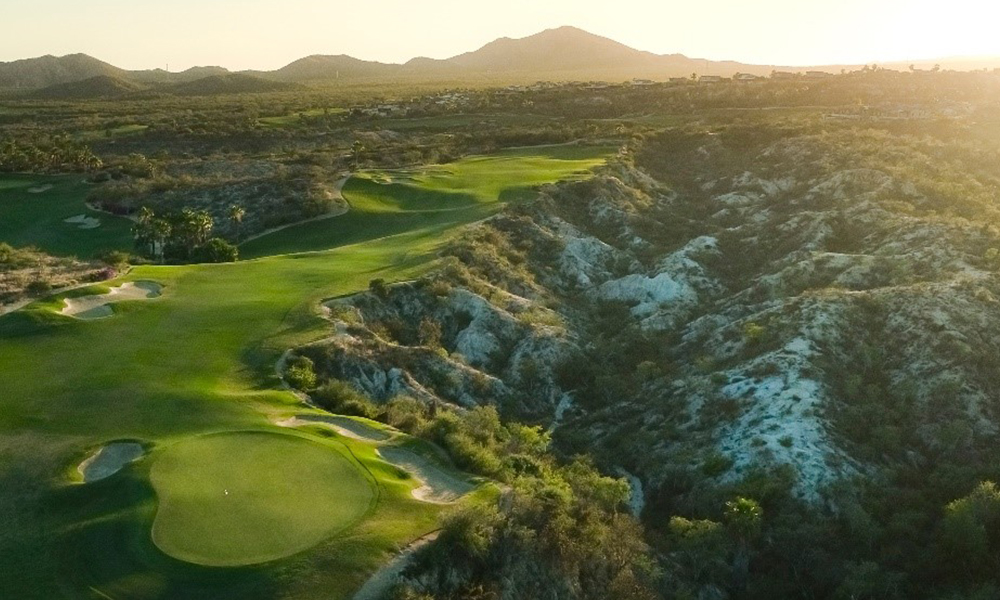 “The 350 panelists who live beyond the U.S. borders bring a truly international perspective to the list, as courses from 25 different countries made this year’s rankings,” the editors reported. While designs from the UK and Ireland feature prominently, Mexico, China, South Africa, and South Korea each charted three entries. All three Mexican courses on the list are in Los Cabos.

Recognized for excellence by the sport’s leading print and digital outlet, Los Cabos continues to reaffirm its position as the reigning ‘Golf Capital of Latin America.’

Diamante G.C. (Dunes), centerpiece of a resort community nestled on 1.5 miles of stunning coastline, sits at No. 50 on Golf Digest’s roster. “Mexico’s first true links (was) fashioned by Davis Love III and his design team (which included his brother Mark Love and designer Paul Cowley) from a fantastic set of white sand dunes along the Pacific Ocean, huge portions of which are without vegetation and seem like enormous snow drifts,” the publication’s digital edition stated. “Holes hug the flowing terrain with little artificiality. Two holes on the back nine once played past a long lagoon but have been replaced by new 12th and 13th holes on the beach. Now all of the second nine is adjacent to the ocean, amidst the tallest dunes. No other links in the world sports cactus.”

Moving up 20 places to No. 73 on the list is Querencia C.C., its scenic, challenging layout, set within a private 1,800-acre golf community, recently treated to a major makeover. “The routing of this Tom Fazio design, one of only two in Mexico, wanders the rugged terrain and low-growth vegetation of a high desert plateau above the Sea of Cortez,” the publication reported. “Holes jump across or sidle up to the edges of rocky canyons and arroyos, with rippling, humpbacked fairways and a number of greens tucked behind stone outcroppings. The club recently brought Fazio back to design three new holes on land it had acquired to the west of the existing course. Those holes, the current 13th through 15th, replace the old ninth and 10th holes. The fairway of the par-4 seventh was also shifted, and the former 11th and 12th have been combined into the new par-5 ninth.”

Debuting at No. 87 on Golf Digest’s roster is Quivira G.C., an aesthetic triumph and engineering marvel by Jack Nicklaus. “Quivira questions a foundational premise in golf architecture: that golf courses can only be as good as their routings,” the editors said. “To be more exact, can a course be considered great if it possesses sensational individual holes but a layout that’s disjointed or lacks rhythm and continuity? The holes at Quivira are strung out across extreme lengths over Cabo’s stark high desert landscape requiring lengthy cart rides to access the disparate sections. But holes like the short par-4 fifth and the jaw dropping par 3s at six and 13 that plummet sharply from rocky headlands down to greens notched onto the edges of cliffs 80 feet above the Pacific Ocean make the extended journeys worthwhile. When it comes to the importance of cohesive routings, enough of our panelists have determined there are exceptions to every rule.”

In addition to the “World’s 100 Greatest Golf Courses” feature, Golf Digest also identified “The Best Golf Courses in 206 Countries.” To do so, the magazine’s editors “surveyed our 1,900+ Golf Digest panelists from North America, who are as well-traveled a bunch as you’ll find in the industry, in addition to a panel of 500 golf enthusiasts from around the globe to help us with coverage on more remote parts of the world.”

Situated at the tip of the 1,000-mile-long Baja Peninsula, Los Cabos is home to award-winning hotels, resorts, championship golf courses, rejuvenating spas and world-class sport fishing. With a unique landscape of dramatic desert and dazzling beaches, Los Cabos is an exotic escape within easy reach of most U.S. and Canadian cities. For more information, images and videos from Los Cabos, visit online at www.visitloscabos.travel, follow us on Twitter @LOSCABOSTOURISM, join us on LinkedIn at www.linkedin.com/company/loscabostourismboard/, and visit us on Facebook, YouTube, Pinterest and Instagram.