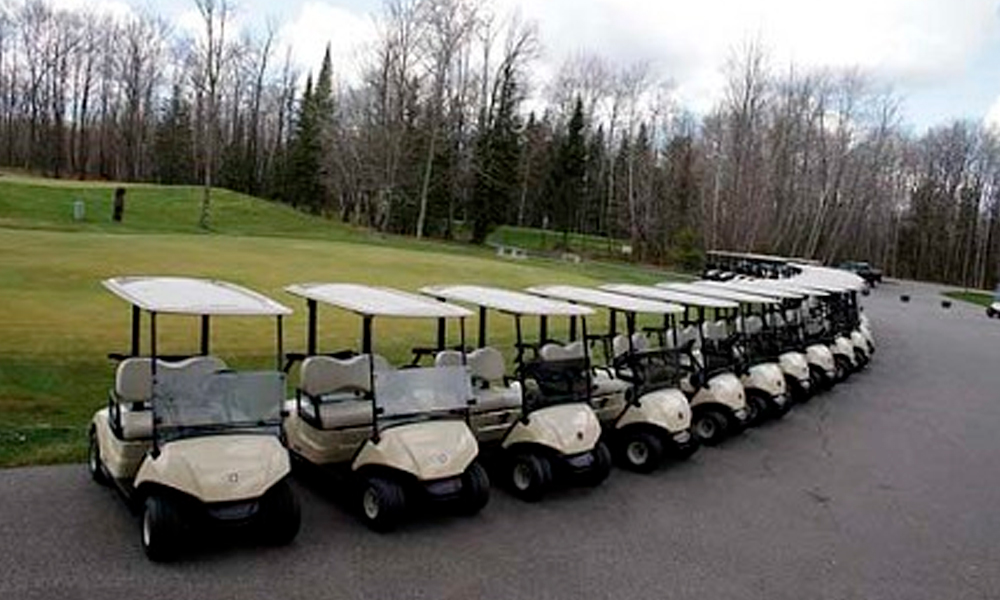 Course professional Dan Buckley said the response to the 40 new carts has been great, despite the lack of a navigation feature that also allows players to order food from the club restaurant after making the turn at the ninth hole.

“They’re very quiet,” he said. “They’re going to be very fuel efficient for us.”

Buckley explained that course officials kept the best 20 of the 60 old carts purchased between 2002 and 2003, switching out parts where necessary, before trading in the other 40 toward the new ones. Northwood paid $4,903 per cart with trade-in allowance of $64,000 for the old carts, making the final price for the new ones $132,120.

Prior to the last order, Buckley said course officials generally replaced the carts after four or five years of use.

“Then we got into six years and then things got a little tough and we ran on with them (the old carts),” he said. “It would have been a real struggle to get through another year with all those old cars.”

“I was blown away by the new cars,” Sauer said. “It’s really a nice upgrade and it really makes it easier to pay the cart fee when you’re getting something that nice.”

As for switching out the GPS screens from the old carts, Buckley said a combination of factors worked against that idea.

Because the dealer promised that the units would be able to be used on the new carts, Buckley said Northwood was able to keep one of the older carts that would have been traded in to be used by the grounds department.

He also said there were other concerns with the old GPS units besides the lack of brackets.

“The back of the monitors were cracking; they’d been outside for 15 years, 365 days a year,” Buckley said. “The wiring was brittle, it would have cost us serious dollars to upgrade those to even transfer them.”

“In my opinion, it would have been a high risk to take computer components that are 15 years old, spend a bunch of money on them to put them on these new carts, and in a year or a year-and-a-half from now, the company just cuts all support to them anyway,” Anderson said. “They don’t want to support an old GPS system, they want to sell us a new one.”

Buckley said the 20 older carts still have the GPS systems for those players who request them. He said course officials will use the extra 40 to replace units that break “until they are gone.”

With 60 carts, Northwood can handle most tournaments it hosts, he added.

“There are major events, when we host a state event, we’ll bring in additional cars,” he said.

While the course officially opened on April 19, there were only four days where golf could be played last month, Buckley said. He added that the first leagues got underway this week, and the rest will start next week.

“This is really the start of our season,” he said.

Anderson added that course came through the winter in great shape.

“It’s not just us, I think any golf course in the area should have came through the winter in great shape,” he said. “Mother Nature was quite lenient on us this past winter.”