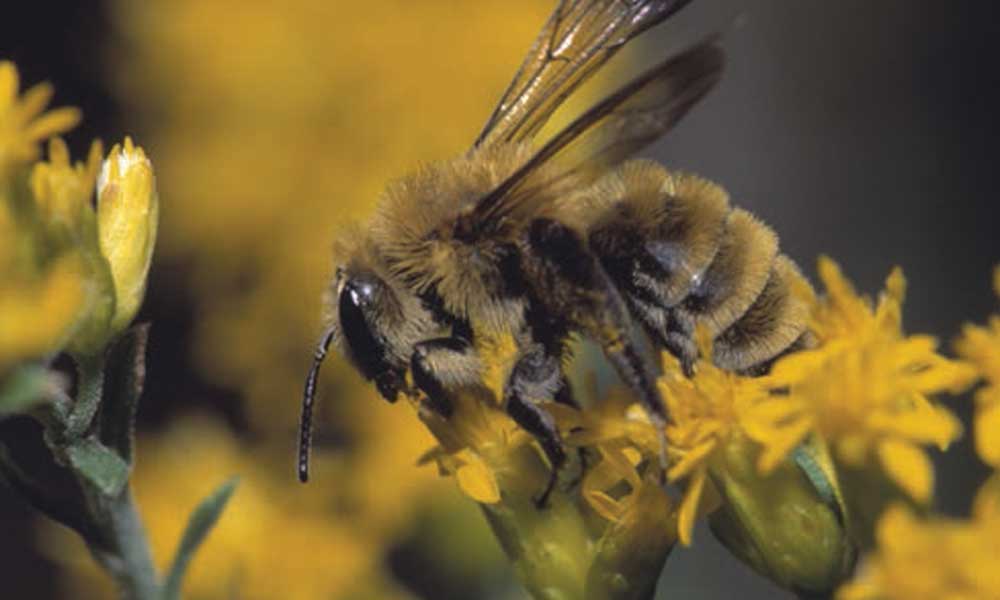 From golf industry publications to mainstream media, beekeeping golf superintendents are rightfully earning their place in the spotlight. At The Golf Course Trades, we’ve frequently shared the stories of beekeeping golf maintenance crews and dedicated golf superintendents to bring attention to the important role they’re playing in protecting honey bee populations. (See: All-In-One Beekeeping for the Bees and The Buzz about Bees)

Whether golf superintendents become beekeepers to build relationships in their community, because they care about the environment or because they want to harvest honey for retail or gifting, they are making meaningful contributions. The challenges facing bee populations, however, extend beyond maintaining honey bee colonies. Wild bees and other pollinators are equally at risk, although their plight is far less publicized than that of the managed honey bee.

HONEY BEES on the Golf Course

For fifteen consecutive years, a nonprofit organization, The Bee Informed Partnership, has conducted a survey to monitor managed honey bee colony loss rates. In the most recent data available, for the one-year period from April 2020 to April 2021, the survey polled 3,347 beekeepers across the United States

Collectively, the three thousand plus beekeepers managed 192,384 bee colonies. According to the U.S. Department of Agriculture, for 2020, this number is approximately seven percent of the nation’s estimated 2.71 million managed honey-producing colonies.

The survey looked at both winter and summer losses state by state and included data from backyard beekeepers with fewer than 50 colonies, sideline beekeepers with 51 to 500 colonies, and commercial beekeepers with 501 colonies or more. Most beekeeping facilities in the golf industry fall into the category of “backyard beekeepers,” based on having fewer than 50 colonies residing in 50 hives. Notably, some golf courses, including The Sanctuary Golf Club, in Sanibel, Florida, maintain close to a million bees, and at some facilities, the production of honey is sufficient to yield a valued additional revenue stream.

During the surveyed period, the participating beekeepers estimated their combined loss of managed honey bee colonies to be 45.5 percent. Only the 2013-2014 survey reported a greater percentage of colony loss. To put this most recent loss rate in perspective, the average annual percentage of colony loss over the previous ten years has been 39.4 percent.

For The Bee Informed Partnership study, participation by beekeepers is voluntary. Although the data collected is considered accurate, it cannot be considered complete. Both international and U.S. studies of bee populations cite varying ranges of decline based on the species of bees included and the differences in other data variables and survey practices. What all studies consistently reveal, however, is a disturbing pattern of population decline. Honey bees, along with other crucial pollinators, seem to be in a fight for their lives.

Beekeepers are clearly taking this important battle very seriously. Despite alarming annual losses of one-third to nearly one-half of all honey bee colonies in the United States each year, the overall honey bee population has remained relatively stable over the past twenty years. By splitting robust colonies into two smaller colonies, buying more bees commercially, and capturing wild honey bee swarms, beekeepers are putting up a valiant fight to sustain honey bee populations.

Nevertheless, aggressively replacing bees in hives to keep bee populations stable does not represent a sustainable solution. The more people who practice backyard or golf course beekeeping the larger the overall bee population becomes and the better positioned it is to weather seasons of colony loss.

Related: How to Be a Bee-Friendly Golf Course

WILD BEES AND OTHER POLLINATORS

All pollinators are at risk, not just the honey bee. Between 2000 and 2009, England lost 58 percent of its butterfly species on farmed land. And the IUCN North American Bumble Bee Specialist Group reports that more than 25 percent of North American bumble bees are facing some degree of extinction. But who is installing hives or providing winter protection for bumblebees? Who is dividing bumblebee colonies to help sustain their numbers?

Bumblebees, wild bees, and most other pollinators lack champions. According to the National Wildlife Federation, most people know little to nothing about wild bees. National Wildlife Federation Naturalist David Mizejewski explained, “More than 90 percent of our nearly 4,000 native bee species live not with other bees in hives but alone in nests carved into the soil, wood, or hollow plant stems. Often mistaken for flies, the majority are tiny and do not have queens or produce honey.”

THE POWER OF POLLINATORS on Your Course

A United Nations Intergovernmental Science-Policy Platform on Biodiversity and Ecosystem Services report issued in 2016 valued the impact of pollinators on global crop cultivation at up to $577 billion each year and identified that no less than 70 percent of all crop species rely on insect pollination. This percentage represents the food we eat, plus “the food we feed the food we eat,” along with seeds and berries consumed by birds and other wildlife.

Multiple issues, including predators, pesticides, or severe weather, can deplete or destroy bee colonies. For honey bees, the top three threats are issues with the Queen, starvation, and the varroa mite, a parasite that impacts honey production. For pollinators in general, loss of habitat, pesticide exposure, and lack of food sources are the greatest risk factors. Ultimately, almost all these issues result in starvation, whether it is from lack of food source directly or being too incapacitated by another threat to access adequate food.
If you know anyone who lost the sense of smell as a symptom of COVID-19 or experienced it yourself, you know that it is a disorienting and debilitating condition. Without smell, food is less appealing, your appetite declines, and as a result, so does your energy level. You become vulnerable to other environmental threats, unable to discern that the milk on your cereal is spoiled or if gas is leaking from your kitchen stove.

For bees, butterflies, and other pollinators, common air pollutants, such as ozone and the nitrogen oxides in diesel exhaust, chemically alter floral odors. Even when exposed to environmental pollutant concentration levels deemed safe by U.S. laws, bees risk losing some or all their critical sense of smell, thereby making them virtually powerless to find their food source.

BEEKEEPING AND BEYOND IN THE GOLF INDUSTRY

Adding beehives to a golf course is great, but it isn’t the only way, nor is it always the optimal way to support more robust bee populations. Golf superintendents who don’t have the capacity to establish and maintain beehives are still uniquely positioned to help reduce the decline in bee populations. Ensuring a golf facility is bee and pollinator-friendly can be equally as impactful as donning a beekeeper suit and maintaining a hive.