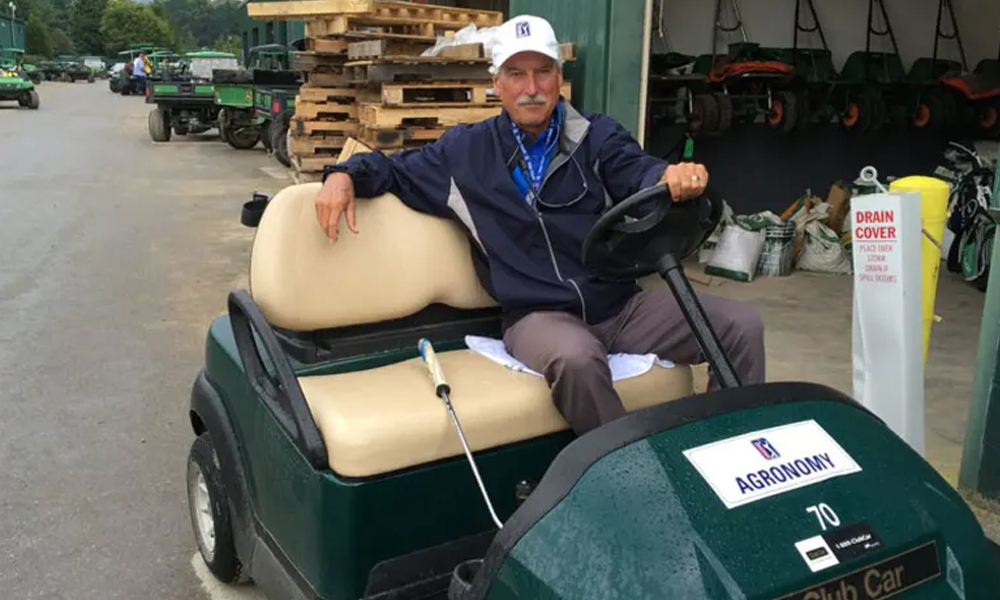 Few acts of nature take place in a cover of solitude quite like the growing of grass and maintaining of turf conditions. Unless, of course, you include those who take charge of the grass-growing and turf control. Then, the silence is deafening.

Which is what Cal Roth embraced about the job from which he recently retired, as the PGA TOUR’s Senior Vice-President of Agronomy. “We’re definitely behind the scenes,” laughed Roth. “Which is the way we like it. We only get talked about when something goes wrong.”

And one could argue that that rarely happens, because for all the hoopla about young players swinging fast, hitting far, and wielding state-of-the-art equipment, perhaps no aspect of the golf business has improved as dramatically as turf control and course maintenance.

“I’m not even sure I have enough time to do it justice,” said Roth, when asked how much his profession has improved playing conditions. “I could talk all day about it. The best way to describe it is, it’s like the business has come out of the dark ages, it’s gotten that good.”

Roth remembers being approached by Bob Goalby, who was participating in the Denver Post Champions of Golf at TPC Plum Creek in Castle Rock, Colorado, in 1986. Now, an approaching player can put a superintendent on guard, but Roth quickly felt relief as Goalby heaped praise. “He came up to me on the 16th hole and said, ‘Cal, these Bent fairways are amazing. They are better than the greens I grew up on.’ “

All these years later, Roth chuckled at the memory. But the pride he felt thanks to Goalby’s comment is nothing compared to what he gets when he looks around today’s golf landscape.

“When I was out of school and just starting in the business, 98 percent of what you had to know you learned on the job,” he said. “But now, these young people know so much more than we did. The talent level with the superintendents who are out there today is incredible.”

Few in golf would argue with Roth’s sentiments. But those who know him well would tell you he is far too humble, that Roth is right there with all those superintendents he praises.

“He’s a master. He knows his stuff,” said Mark Russell, the PGA TOUR’s Vice-President of Rules and Competition and one of Roth’s closest friends.

Their service to the PGA TOUR goes back decades, Russell to 1980, Roth in 1983 when he was hired to be superintendent of TPC Plum Creek, which was the third member of the TPC family. A native of Illinois and graduate of Southern Illinois University, Roth was superintendent at Flatirons Golf Club in Boulder, Colorado, when then-PGA TOUR Commissioner Deane Beman arrived in town to interview candidates for the job at TPC Plum Creek.

“I was very fortunate to get the interview,” Roth said. “They wanted to come out and see Flatirons.”

Clearly, the tour of Flatirons went well – “I took them to the best holes,” laughed Roth – because what unfolded was an impressive career at the PGA TOUR. From TPC Plum Creek, Roth served as superintendent at TPC Scottsdale in Arizona, then in 1989 he was promoted to Director of Golf Course Maintenance Operations for the TPC Network.

Later, Roth became the PGA TOUR’s lead agronomist, going from Senior Director to Vice-President, to Senior Vice-President, with every promotion providing him a wider embrace of policies and programs for conditioning the more than 150 golf courses that host tournaments on the PGA TOUR, PGA TOUR Champions and Web.com Tour, plus international tours in China, Latin America and Canada.

All in all, a versatile and integral team member who was lauded by PGA TOUR Commissioner Jay Monahan for “contributions to the PGA TOUR, the turfgrass industry and the profession of golf course superintendents that are nearly impossible to quantify.”

Added Commissioner Monahan: “Early in Cal’s career, his leadership of the TOUR’s golf course maintenance and agronomy operations across all our Tournament Players Clubs led to TPC becoming synonymous with an exceptional golf experience.

“On the occasion of Cal’s retirement after 35 years of distinguished service at the PGA TOUR, it’s my honor on behalf of our players and staff to say thank you for a job well done.”

Roth remembers when Beman would ask him, “Do you think we can get the greens to 10 feet (on the Stimpmeter)?” and the subsequent laugh is proof that times have changed. Now, greens run far faster than that, and where it used to be that the standard mow was 5/32d of an inch, “we’re mowing at 1/8 of an inch, or lower,” said Roth.

“But the skill sets extend beyond that, because we’re using less fertilizer, less fungicide, less water.”

What there’s more of, though, are friendships. “I’ve worked for the PGA TOUR for 35 years and have had to pinch myself all the time,” Roth said, “and it’s because of all the relationships.”

That worked both ways, because Roth left a lasting impression, too.

“(He) was a great asset for us on all our projects involving the PGA TOUR,” said architect Gil Hanse, who specifically praised Roth for his contributions to the 2016 Olympic Golf Course in Rio de Janeiro.

“Cal was willing to adapt to some of our out-of-the-box thoughts on design, construction and maintenance,” Hanse added. “Combining that with the myriad complications that came our way on the project, showed me Cal was willing to adjust while still never compromising on his sound agronomic principals. We are forever grateful for his significant contributions to the success of that project and will miss working with him on our other TOUR projects.”

Though Roth said he will maintain a relationship with a few of the tournaments on the 2018-19 PGA TOUR schedule, mostly he’s going to spend a lot more time with wife Cathy and the outdoor activities they love in Florida and those summer treks to Colorado.

“But,” he said, “I will continue to feel fortunate for all these years I’ve had here. I will think about that a lot.”