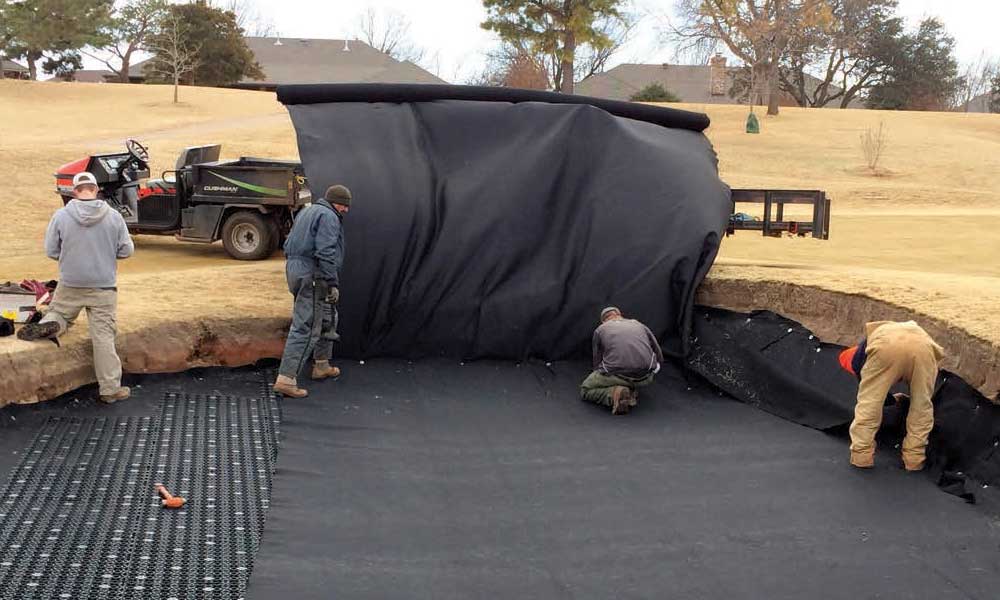 If you could irrigate significant portions of your golf course less frequently and then recycle and reuse both the leftover irrigation water and any excess collected rainwater, would your operations budget benefit? What if, in the process, you could also eliminate washed out bunkers and standing water on your greens?

These environmentally sound objectives form the premise behind AirDrain, a permeable, polymer geocell designed by AirField Systems for use on sports fields, green roofing, dog runs and kennels, playgrounds, golf course bunkers, tee boxes and greens. Described by the company as “the advanced geocell for modern golf course construction,” the AirField geogrid is designed to help golf course superintendents get more out of rain and irrigation water while it’s in use and then reuse what remains.

Company spokesperson, Michael Bean described the AirDrain as a simple, easy and long-lasting solution that affords golf courses a fast and effective strategy for bunker renovation or drainage solutions on tee boxes and greens. He explained that AirDrain systems

A Simple Overview of AirField Systems for Bunkers and Greens

Michael Bean described the installation of the system for bunker applications in this way: “Using AirDrain geocells for bunker drainage requires filter fabric that covers the bunker floor. Then the AirDrain grid is installed on top of that filter fabric. Next, filter fabric is placed above the AirDrain grid. This safely encloses the AirDrain grid from all soil and sand. Finally sand is place on top of the entire drainage system. In most cases gravel is only used in the trenches for the exit pipes and bedding material for the subgrade isn’t necessary. Because the AirDrain geocell provides a one-inch void that is underneath the entire bunker, collected water can easily be routed to retention ponds or underground harvesting tanks.”

When using AirDrain geocells for drainage on tee boxes and putting greens, the installation method is generally the same method as described for bunkers. The sand rootzone mix specified for your turf type is typically 10 to 11 inches in depth and sits atop the filter fabric that is on top of the AirDrain grid. This root zone mix has a nearly perfect perched water table that occurs without the use of peat moss or clay, and creates what is essentially, an aquifer above a region’s natural aquifer. The USGA described it as a “perched capillary fringe.” Available at the deepest root level, the water can be a critical difference maker by adding one to three additional days of plant-available water in comparison to the water availability offered by a gravel drainage profile.

Although these descriptions are highly simplified, they illustrate how streamlined the process of building an AirDrain bunker or green really is.

Motivated by the anecdotal findings regarding the two sports fields, the USGA and Texas A&M University launched a collaborative five-year study of the two differing drainage systems. In the study, researchers introduced variables including particle size of sands and the porosity of the geotextile fabrics used. In summary, their findings showed that the water at the bottom of the test rootzones constructed with the AirField design was under less tension than the water in the test greens constructed with the USGA design, resulting in approximately a half-inch of increased water storage (one to three days more) over the amount retained by the USGA design.

You can read the full finding of this report here: Comparison of Putting Greens Constructed with AirField Systems and USGA Designs, usgatero.msu.edu/v12/n4-6.pdf

AirDrain Systems in Use Across the U.S.

Among the golf courses transitioning to AirDrain systems are:

The Greens Country Club
Located in Oklahoma City, this private golf course used its existing grounds crew to install the AirDrain system during bunker renovation. By working on the project at a pace that minimized impact to the course and avoided the need to hire outside labor, The Greens Country Club was able to control the cost and the downtime often associated with bunker renovations.

Bellerive Country Club
The historic Bellerive Country Club, located in St. Louis, was built as a nine-hole course in 1897, and was relocated in 1955 to a new site selected by Robert Trent Jones, Sr. In 1965 the course became the ’youngest’ venue to host the US Open. Host to many other prestigious tournaments, including the PGA Championship (1992), the U.S. Senior Open (2004), the BMW Championship (2008) and the Senior PGA Championship (2013), Bellerive will welcome the 100th PGA Championship in 2018. In 2006, the course underwent an extensive renovation under the supervision of Rees Jones, and in 2014, it added a 7600-square-foot practice green, using the AirDrain System for golf greens.

How Significant Could the Installation of an AirDrain System Be for Your Golf Course?

Every golf course is different, defined by topography, climate, design, rate of play and hundreds of variables that create unique conditions and challenges, not the least of which are budgetary considerations. The ideal solution for one course many not be the optimum choice for another. However, many turf managers using AirField Systems AirDrain on their golf courses or sports fields have reported a stronger root system and as a result, healthier turf in addition to the benefit of improved recycling of both irrigation and rainwater for later use.

You can find out more about AirDrain by AirField Systems at www.airfieldsystems.com and learn about other options for improving drainage in bunkers and greens by reviewing The Supplier Guide available at www.GolfCourseTrades.com.

Linda Parker has been writing professionally since the 1980s. With clients in finance, sports, technology, change enablement, resorts and nonprofit global initiatives, Linda helps organizations communicate their stories in meaningful ways to the people they most want to reach. She has authored, ghostwritten or contributed to more than a dozen nonfiction books. Linda is a member of the Authors Guild and the Golf Writers Association of America. You can connect with her on Facebook at: www.facebook.com/GlindaCreative