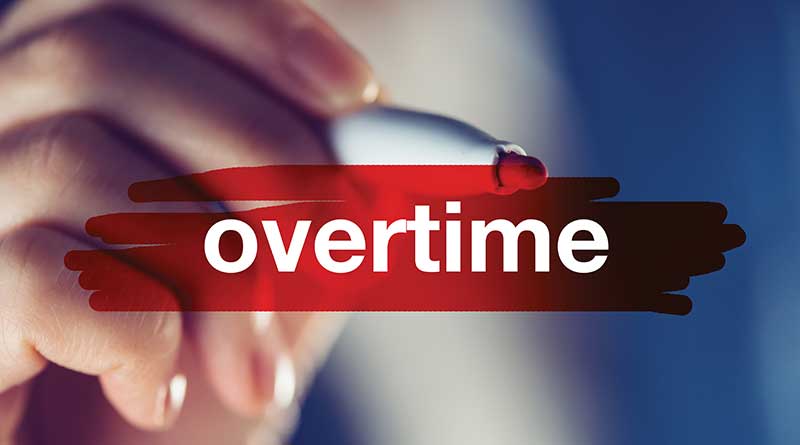 Abstract: Employers can incur costly penalties for violating the overtime regulations of the Fair Labor Standards Act (FLSA). The Biden administration is expected to reduce the number of employees exempt from overtime by raising the required salary threshold and tightening the workplace duties tests. To protect their interests businesses should proactively institute procedures that ensure payroll integrity.

Wage and hour law has long bedeviled employers. Who is exempt from overtime rules? How do you calculate time-and-a-half when employees work off the clock and fail to record their hours? And how about those remote workers, spending a few minutes here and there tackling business emails?

The wrong answers can spark costly penalties. “Employers who fail to correctly pay overtime must make up back wages plus ‘liquidated damages’ equal to an equivalent amount,” says Douglas E. Witte, who represents businesses in labor and employment law matters at Madison, Wisc., -based Boardman & Clark (boardmanclark.com). “If the Department of Labor (DOL) thinks an employer willfully violated the law the statute of limitations gets bumped up from two to three years. And employers may also have to pay attorneys’ fees for individuals who have brought successful lawsuits.”

Workplace observers expect compliance to get tougher as the federal government starts tightening regulations. “Part of the Biden platform was to empower workers,” says Ann F. Kiernan, an employment law attorney and lead trainer at Fair Measures, a management practices consulting firm in Denver (fairmeasures.com). ). “I expect a lot of pro-employee activity, to include increased enforcement by the DOL.” Among the likely regulatory steps over the coming months: boosting the overtime salary threshold and rewording exemption parameters. Many states are also passing legislation aimed to protect and expand employee overtime.

It follows that all employers should make a point of correctly categorizing workers as either exempt or non-exempt from overtime. Businesses with only local traffic often believe that overtime law does not apply to them, since the Fair Labor Standards Act (FLSA) covers enterprises engaged in interstate commerce. In reality, any local enterprise comes under the FLSA umbrella if it performs seemingly innocuous tasks such as making phone calls or sending emails to vendors or customers in other states, transacting credit card payments with distant entities, or receiving goods or services from beyond state borders. “It’s the rare business that is not involved in some way with interstate commerce,” says Matthew C. Heerde, Principal at Heerde Law, New York City (heerdelaw.com).

Small businesses may also believe they can ignore overtime law because their revenues come in under the $500,000 level at which the FLSA normally kicks in. Yet even the smallest operation is covered by the FLSA on a so-called “per-employee basis” if even a single worker spends a substantial amount of time performing the tasks enumerated in the previous paragraph. Finally, state and local overtime laws often mimic FLSA regulations and apply to the smallest of employers, regardless of interstate commerce status.

Errors are easily made. “Employers most often get into trouble for misclassifying employees as exempt,” says Witte. Ignorance of the law is no excuse, he adds, and wise businesses keep paperwork to support their decisions. “The burden of proving exempt status is on the employer.” Employers must be able to convince regulators that exempt personnel falls into one of the so-called “white-collar categories” labeled executive, professional or administrative.  Exemptions may also be granted for some people who are computer professionals, engage in outside sales, or are highly compensated. (Employers can review the complete duties tests by visiting dol.gov, then clicking on “Topics” and “Work Hours.”)

Exempt individuals must earn at least $684 a week, which translates to $35,568 per year. Nondiscretionary bonuses and commissions, paid annually or more often, may be used to satisfy up to 10 percent of that level, which many observers believe is due for an increase. “I think you’re going to see the Biden administration raise the salary threshold, perhaps linking it to cost of living increases,” says Witte.

Paycheck size alone, though, is not sufficient criteria. “Employers sometimes fail to understand that exemption from overtime requires not only meeting the salary threshold, but also passing the so-called ‘duties test,’” says Heerde. While the duties tests vary by exempt category, they boil down to one essential: The exempt person must exhibit sufficient independent authority to make essential decisions in their daily work. Just being assigned an impressive-sounding job title is not enough.

Employers should brace for changes in these exemption parameters. “The DOL is likely to take a strong look at the duties tests for white collar exemptions,” says Witte. “The language has not been tweaked in recent years to reflect the way people work today. It may become harder to prove that a certain individual exercises independent judgment and authority rather than just processes papers or follows a flow chart of actions.”

As the above comments suggest, qualifying for exempt status often requires judgment calls—and that’s just where employers often get into trouble. There is a common temptation—conscious or otherwise—to classify people as exempt to avoid the costs of overtime. This is exactly the problem the Biden administration has stated it wants to address. State and local governments have also been tightening regulations and increasing inspections to ensure that exempt personnel are really exercising management-level decision-making.

Up for special attention, say workplace observers, is the administrative exemption. “Many times, employees do not really qualify because they do not have sufficient authority or enough qualifiable duties,” says Witte. “This problem has been on the DOL radar for some time. Employees have filed complaints, and there have been class action lawsuits.”

Misclassifications can be costly for employers, especially when an exempt individual’s salary has steadily increased over time. Should a DOL inspector issue a violation the employee’s elevated salary is first broken down into an hourly rate, which is then utilized as the basis for calculating past overtime and penalties. “Sometimes an employer will react to a steadily rising paycheck by saying something like, ‘This person has been starting to work too much overtime—let’s just make them salaried,’” says Bob McKenzie, President of McKenzieHR (mckenziehr.com). “That’s not allowable unless the individual really qualifies for exemption.”

The lesson is clear: Employers should assume non-exemption when classification is ambiguous. “The law is deferential to workers in wage and hour actions,” says Heerde. “The consequences can be costly for an employer who does not have sufficient records to refute an employee’s wage and hour claims before an administrative agency or court.”

While misclassification is the most common error in wage and hour law, employers can also be penalized for allowing work time to go unrecorded. “Employees often fail to report off-the-clock hours,” says Witte. “Maybe they work through their lunch hour, or they come in early or stay late and don’t record it because they’re afraid of getting into trouble with their boss for working overtime. This is an area that the DOL continually receives complaints about.”

While one might suspect that some misguided employers overlook or even encourage off the clock labor, the fact is that workers can also be to blame, says Vicki Lambert, director of ThePayrollAdvisor.com.“Sometimes employees will get enthusiastic and think, ‘Well, I’ll just do this job off the clock real quick, and then my boss will be really happy.’ And they end up getting the employer in trouble.”

Other times, employers will allow record-keeping to fall through the cracks. “Problems can arise when an hourly recording system is not sufficiently detailed, or not contemporaneous,” says Heerde. “Later, when an issue arises, the employer has to track down evidence of work hours by sorting through old emails and other records to prove an employee was paid correctly.”

The record-keeping challenge has increased as more people work from home. “One of the most common mistakes is failing to correctly track remote workers’ time,” says Lambert. “Sometimes people will work off the clock for a few minutes—maybe they check their emails over dinner or make a phone call or two—and the employer thinks that’s okay.”

In fact, employees must be compensated for all time worked, even if off the clock labor violates company policy, says Lambert. Employers who wish to discipline employees who put in extra time without permission must use nonfinancial procedures such as verbal and written warnings, personnel file notations, or terminations if appropriate.

Employers are not obligated to pay overtime to independent contractors. Just who qualifies for that status, however, is not always clear. “Distinguishing between employee and independent contractor status is an ongoing challenge,” says Heerde. “Because states have different standards from the federal government about where to draw the line, compliance and enforcement issues arise.” Individuals classified as independent contractors will sometimes later file complaints claiming that they were actually employees and are due back overtime. This can lead to costly litigation.

Wage and hour attorneys expect the federal and state governments to tighten the standards which determine who is in business for themselves. “I think the Biden administration will make it much more difficult to classify someone as an independent contractor,” says Witte. “Things will probably head the way of California which has a very restrictive test.” In early May the DOL withdrew a regulation that had been introduced by the prior administration to which would have made it easier to classify someone as an independent contractor.

Further moves are expected. Until the new regulations are firmed up, attorneys advise employers to play it safe. “I always recommend that employers make sure independent contractors are operating their own businesses and are in positions to make profits or losses based on their own actions,” says McKenzie. “They should also submit invoices for work done—and their payments should go through the business’s accounts payable department rather than the payroll account.”

Employers can be penalized for errors in these other scenarios:

If payroll has become more complicated in recent years, employers are expected to encounter even greater challenges as regulators at the federal, state and local levels retool wage and hour regulations to reflect a greater sensitivity to employee rights. Businesses must skillfully navigate this shifting terrain to avoid errors that spark costly financial penalties. “Employers are responsible for making sure payroll is done correctly,” says Lambert. “They must keep up to date with changing laws.”

Flying without an adequate legal radar can result in a crash landing. “Many employers don’t understand wage and hour law and make things up as they go along,” says McKenzie. “They think everything will be okay, but sooner or later they get caught.”

Phillip M. Perry is an award-winning business journalist based in New York City. He covers management, employment law, finance, and marketing for scores of business magazines.

Doctor Turfgrass aka Dr. Richard Hurley, Does it Again
The Summit Club at Armonk Hires Drew Clayton as Assistant Golf Professional
To Top