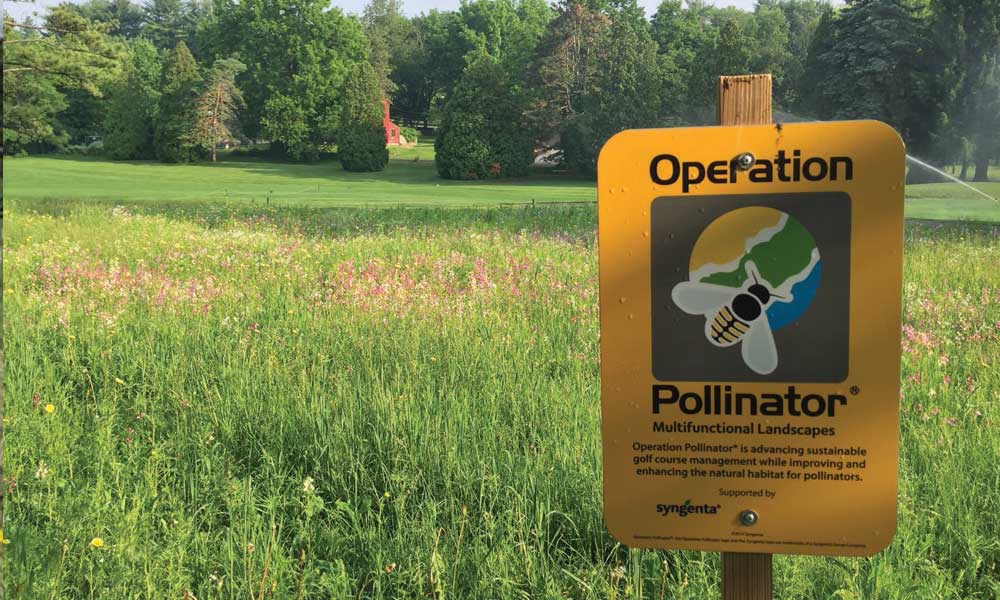 The concept of a honeybee hive as a welcome addition to golf courses, city parks, backyards and public land is becoming increasingly widespread, with even the White House installing two beehives to help pollinate the Obamas’ South Lawn vegetable garden.

In May of this year, in response to the Presidential Memorandum, “Creating a Federal Strategy to Promote the Health of Honey Bees and Other Pollinators,” the federally appointed Pollinator Health Task Force released the Pollinator Research Action Plan. The plan included strategies to

The report summarized its objectives by saying, “The honeybee pollination alone adds more than $15 billion in value to agricultural crops each year and provides the backbone to ensuring our diets are plentiful with fruits, nuts and vegetables. Through the actions discussed in this Strategy, and by working with partners across our country, we can and will help restore and sustain pollinator health nationwide.”

Recognizing that adding beehives–even if it is only a few hives at each location–is important, golf course superintendents are stepping up to become official or unofficial partners in the critical effort to restore health to the nation’s honeybee population. Across the country, golf courses are buzzing with efforts to protect and nurture pollinators.

At The Ritz-Carlton Golf Club Sarasota, located in Lakewood Ranch, Florida, golf club managers waited patiently this year for their harvest of honey from the hives located at the back of the golf course property. Using the time-honored technique of calming the bees with smoke, along with a bee protection suit, beekeeper and Club Director of Grounds Sean O’Brien raided the hives for the resort’s first honey harvest. The honey will be enjoyed in the restaurants at the course and at the hotel, in spa treatments at the resort and even some specialty drinks at the bar.

Honeybees Aren’t the Only Valued Pollinators

The Fairwinds Golf Club on Vancouver Island, British Columbia, started its beekeeping project last year not with honeybees but with mason bees. In April of 2014, the superintendent and staff installed two mason bee houses along with several hundred cocoons ready to hatch. Soon afterwards, bees began hatching, collecting pollen and laying their own eggs to add to the busy population.

Mason bees nest in naturally formed hollows in wood or in the abandoned tunnels created by carpenter bees, an insect you do not want to encourage; it destructively bores holes into buildings and wooden structures. The mild-mannered mason bee, however, does not damage property and is delighted to nest in houses you can purchase or build simply from reeds, cardboard tubes or drilled wood planks.

At Fairwinds Golf Club, the cardboard tube nests (with eggs intact) were collected in July. The crew then stored the nests through the winter to help protect the developing larvae from natural predators, such as woodpeckers, starlings, robins, crows, and wasps. This past spring the nests were relocated outside and as many as a thousand mason bees hatched and began the pollination process anew.

In North America, there are approximately 140 species of mason bees. Although they do not produce honey, mason bees are robust pollinators. Experts suggest that mason bees pollinate tens to perhaps hundreds of times more area than is pollinated by honeybees.

Over fifty U.S. golf courses have chosen to get involved supporting pollinators, not by keeping bees, but by creating or increasing areas of native grasses and wildflowers as part of Operation Pollinator. By establishing more pollination habitats to attract bees, butterflies, and other pollinators, these courses are helping to restore pollinator populations. Supported by Syngenta Turf and Landscape, Operation Pollinator offers golf course managers information and tools to help them establish or enhance and manage wildflower resources.

At Allentown Municipal Golf Course in Allentown, Pennsylvania, under the guidance, of course, Superintendent Chris Reverie and Greenkeeper Kyle Krause, a long-term project is underway to maintain, upgrade and beautify the golf course. As part of Operation Pollinator, an unkempt mound of dirt measuring nearly ten feet in height, left from course redesign in 1999, was transformed into a spectacular quarter-acre of wildflowers in bloom.

Suited to attract bees and butterflies, the native-appropriate flowers need less water than turf areas, require no mowing, and contribute substantively to the aesthetic appeal of the course.

Golf Course Superintendent Chris Dyoff has been keeping bees since 2009. He started with two hives at The Garrison, a public golf course in Garrison, New York. The course was looking to “go greener” and implemented several environmentally aware initiatives, including seeking and obtaining certification through the Audubon Sanctuary Program for Golf. The idea of adding beehives at The Garrison was a plan Chris enthusiastically embraced and prepared for by taking a class with his friend, master beekeeper, Rodney Dow.

Rodney, of Glynwood Farm (an agricultural nonprofit organization based in Cold Spring, New York, that works to ensure farming continues to thrive in the Hudson Valley) and President and CEO of The Dow Corporation, apprenticed as a teenager with Ben Ceponis, one of the most prominent beekeepers in Lithuania. Under Ceponis’ tutelage, Dow developed a strong foundation in a beekeeping pedagogy that is best expressed as “the Old World approach to beekeeping,” a methodology he passes on to his students.

Describing honeybees as “nectar collectors,” Rodney observed, “Working with bees is a lifelong passion because you can always learn something new.” For Chris, the learning is clearly continuing beyond the class he took with Rodney and the additional time Rodney generously shared with him. The bees themselves offer a learning laboratory in the art and craft of beekeeping.

The hives at Garrison Golf Club have done well generally, but over the years, a few colonies have been lost. Chris believes that such losses have most likely resulted from extreme winter weather, infestations of mites, or a combination of the two stress factors.

Mites are tiny tick-like parasites that suck blood from both adult bees and from the developing brood. When a mite attaches itself to a bee, the bee is weakened and its lifespan is shortened. Any non-infected healthy bees then struggle to carry more of the workload, and the hive as a whole becomes even more susceptible to disease and viruses. Although Chris has lost a few bee colonies, typically, if a hive failed, he was able to repopulate a new one from the remaining hive.

Golfers and Bees: Coexisting in Harmony at The Garrison

Since the installation of the hives at The Garrison, there has yet to be a reported incidence or complaint about the bees’ presence. Instead, the bees have produced honey for food service use at the course and drawn the attention of many golfers who often stop Chris as he is checking the hives. As interested onlookers, they observe his progress, ask him questions, and, from time to time, share memories of their father or grandfather keeping bees.

Earlier this year, Chris accepted the position of Golf Course Superintendent in Training at another picturesque Hudson River Valley property, the Phillip J Rotella Memorial Golf Course. Rotella Memorial, which until 2002 was known as Minisceongo Golf Course, is operated by the town of Haverstraw, New York, and is located only some thirty miles away from The Garrison. Chris spent six months working alongside Cal Fowx, Rotella’s superintendent of more than twenty years. On November 1, 2015, with Fowx’s retirement, Chris officially assumed the role of Golf Course Superintendent at Rotella.

Chris, who has helped two other golf course superintendents start their own hives, reflected on why bees bring so much to a golf course. “I feel that the public has a perception of golf courses as being some type of toxic site where all we do as superintendents is spray chemicals,” said Chris. “In fact, we are true stewards of the land. I have reclaimed many acres of out-of-play areas back to native prairies and have included honeybee hives in those areas. I would encourage any superintendent to give beekeeping a try.”

You can read more about the plight of honeybees in “The Buzz about Bees.”

Linda Parker has been writing professionally since the 1980s. With clients in finance, sports, technology, change enablement, resorts, and nonprofit global initiatives, Linda helps organizations communicate their stories in meaningful ways to the people they most want to reach. She has authored, ghostwritten or contributed to more than a dozen nonfiction books. Linda is a member of the Authors Guild and the Golf Writers Association of America. You can connect with her on Facebook at: www.facebook.com/GlindaCreative