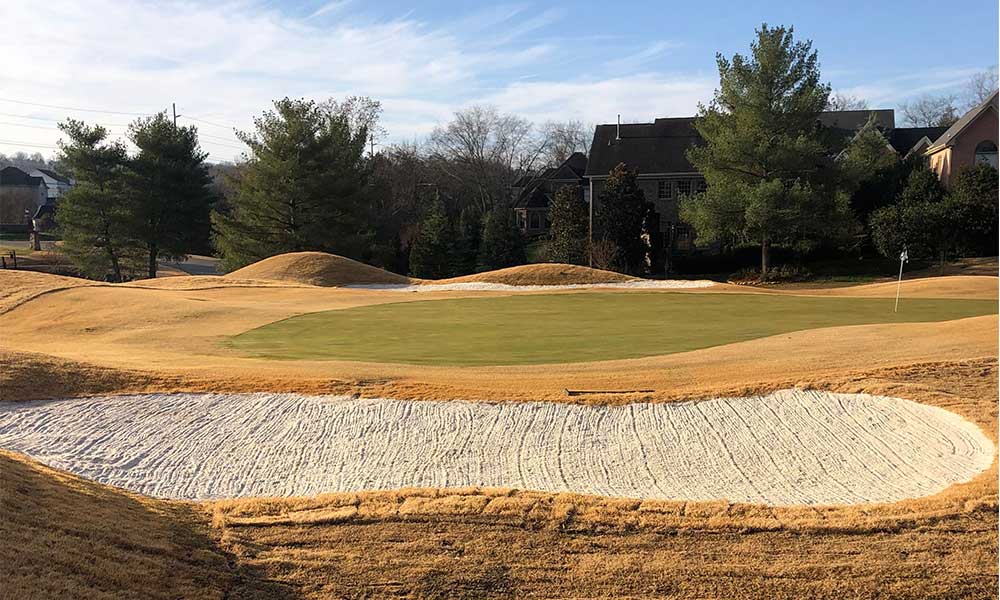 Like many courses built in the great golf boom of the mid to late 90s, the Club at Gettysvue in Knoxville, Tennessee, had a number of challenges – none more glaring than the condition of its bunkers. “Some things that should have been done during the original build were not done, in an effort to finish the project on time,” says course superintendent Jeff Dudych. “We always had a lot of water running into our bunkers, because they were not built to today’s standards. Bunker maintenance has been an ongoing issue for my entire 24-year tenure at Gettysvue. We invested some money in the bunkers ten years ago, but it wasn’t enough to fix the issues. We had bunkers that didn’t drain properly, a lot of contamination – we are on red clay here, and a few weeks after putting new sand in the bunkers it would be contaminated with clay.”

Two and a half years ago, the course was sold to three club industry veterans. “The new owners have been fantastic,” says Dudych. “They have said from the beginning they wanted to invest in the course and do things properly.”

Last year, Dudych formulated a plan to fix the course’s bunker issues. Given the nature of the soil under them, and the Tennessee climate – the course averages around fifty inches of rain a year – it was obvious that a proper liner was a high priority, and it didn’t take long to determine that Capillary Bunkers was the right choice. “During my travels, I’ve seen all the liners and from talking to my colleagues, it was clear that the Capillary Bunkers stood up the best,” Dudych says.

The initial plan called for doing nine holes at a time. However, because of significant membership growth caused by partnering with the members, the club was able to complete all eighteen holes in one hit. North Carolina-based contractor Signet Golf was hired to do the work. They started in October and the last of the Capillary Bunkers was installed in late November.

Dudych says he has already seen the benefits of doing the work. “We had our first big test last Saturday – an inch and a half of rain in an hour,” he says. “Normally that would require fifty to sixty man-hours of repair. I sent one employee out, mostly to blow leaves and hand rake and he was done in three and a half hours and the membership is thrilled with the quality!