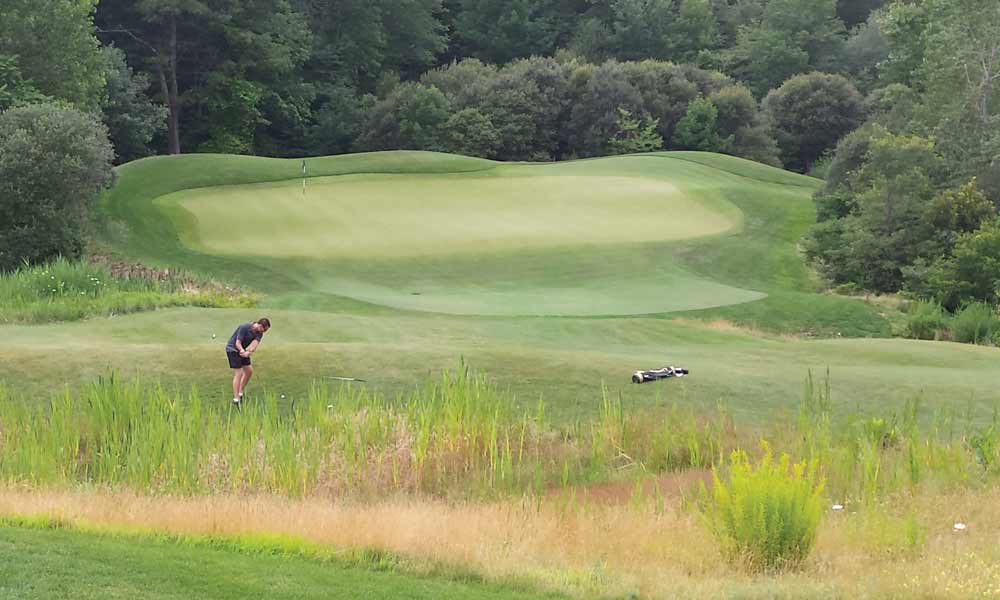 To Red Sox fans, they were two words they longed to hear in a playoff series against the New York Yankees – “Boston Wins.”

It was Game Seven of the 2004 American League Championship series, and they were muttered morosely by Yankee radio broadcaster John Sterling. Boston had just completed their historic comeback, rallying from a 3-0 series deficit to turn the tables on the hated Yanks and advance to the World Series, where they finally put to rest the Curse of the Bambino. At that momentous occasion in sports history, Sterling was remarkably laconic and reserved – he flat-lined the final call: “Boston wins.”

“Boston wins” can apply to another Boston vs. New York comparison: public golf. Long Island has Bethpage, Northern Jersey has the Knoll Club, and Ferry Point has finally brought a daily fee, “country club for a day” experience to the five boroughs, but many courses in the City still languish due to NYC Parks Department mismanagement. And getting out of the City to play a decent daily fee course is usually an all-day affair since most are a minimum of 75 minutes away from Manhattan.
By contrast, the Boston public golf scene has blossomed into one of the country’s best. It’s a shame the golf season is so short in Beantown, because the golf is downright sublime, and all public golfers have easy access to it. 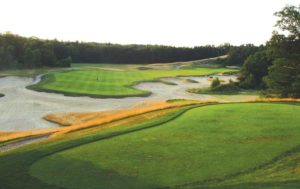 The Iconic 17th at Red Tail

Brian Silva is Boston’s “favorite son” golf course architect – the local boy started his career with the late, great Geoffrey Cornish as a design associate and later as Cornish’s partner, before opening his own firm. But although Silva worked at Cornish’s elbow during his formative years, the most profound and indelible influence on his work was Pete Dye.

“I was looking at an overhead of the fifth hole at PGA West Stadium Course, an S-shaped par-5,” Silva explained to your author in an earlier interview. “The diagonal angles off the tee make golfers think about where to place their shot, and alternating shot patterns make the golfer shape shots one way off the tee and the other way into the green, keeping them from getting into a repeating rhythm.”

At that moment, Silva had his epiphany: strategic designs are fairer to the average player while still challenging the expert golfer.

“Target style golf limited playing options and had resulted in cookie cutter, predictable courses,” he explained. “It’s easy to defend par by simply making a hole narrow and trouble-lined on both sides. But it also takes strategic options out of the player’s arsenal. Do you want all the trouble on the sides? Go bowling!” he concluded.

Since then, Silva’s designs have skyrocketed up the rankings lists. Off the tee, he employs the “Doctrine of Deception,” so golfers have to carefully plan their shot before executing it. His wide fairways offer many options for all skill levels of golfer to play the hole. And his green complexes feature closely shaved chipping areas so all manner of recovery shots are available. 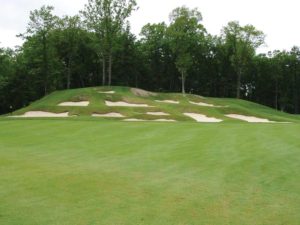 Red Tail, just a drive and an 8-iron from where Paul Revere made his historic ride is his most celebrated public course to date, and the par-5s are its centerpieces. The second hole features a concept all Silva’s own, one with a distinctly Boston flair – the “Green Monster Bunker Complex” – a vertical pancake stack of bunkers five stories high. The hole doglegs awkwardly in front of it, so long hitters run the risk of running through the fairway and into it if they can’t hit a controlled fade. Similarly, the fourth hole features an enormous punchbowl green, popular with public golfers because errant shots may get friendly bounces. And the 18th is a summation of all that came before; the fairway rumbling downhill before flattening and leaving the golfer with a downhill approach to a green guarded by water short and right and bunkers short left.

“The best hole on the course is 17. It’s been voted the number one public golf hole in Massachusetts every single year since Red Tail opened,” said Boston golfer Mike Mosely, describing the 45-degree angle dog leg right Cape Hole, curving hard around a deep waste bunker. Golfers love to try to carry as much of the bunker as they can, but the clean backdrop of the forest tree line make depth perception difficult, so many players end up flailing in the waste bunker. 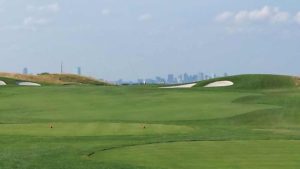 “Young man, pay attention!!” roared John Sanford’s school teachers, who could never get him to stop doodling golf holes in class instead of listening to their lectures. But Sanford turned those doodles into a remarkable career as a golf architect, both as a lead design associate for Jack Nicklaus and on his own as a solo designer.

High on a Quincy hilltop just eight miles from Fenway Park, Sanford designed his breakout complex, Granite Links a 27-hole facility. 18 holes rumble up, down, and around mountainous quarry-side terrain, sometimes clinging precipitously to the edge. The other nine explore marshlands and rocky outcroppings. On all three nines fairways are remarkably wide, but the severe elevation change combined with the ever-present fickle winds put distance control as well as accuracy at a premium. Like a great links design, fairways blend seamless into the greens, so it’s imperceptible where one begins and the other ends. (You’d never know you were playing on a former landfill.)

Moreover, although the airways are wide fairways and the greens oversized, mounds and ripples, and fall-offs divide them into several smaller greens in one. If you miss your target on your approach, scraping a par can be a heat-stopping affair. Miss the little level where the pin is and you can roll off the green entirely.
It’s a testament to Sanford’s ability to tackle a difficult, complicated site as 74 different permits were needed to complete the project. Granite Links is also, arguably, the hottest public golf scene in the country, with its cliff-top bar, panoramic views of, alternatively, the downtown Boston skyline. it’s hip, it’s hoppin’, it’s downright sexy – look no further than here to see that golf is back on the upswing.

If Red Tail is a fiery redhead and Granite Links a buxom blonde, then George Wright Golf Course is a permed brunette. It’s been called Boston’s proper rejoinder to Bethpage, just without the major championship pedigree. It’s where all the hardcore, dedicated public golfers play, but since it’s in the heart of the city, it’s easier for everybody to sneak in nine after work as well. You can’t do that at Bethpage; it’s out in Nassau County.

Like Granite Links, George Wright is an engineering marvel, more so because Donald Ross designed it at the height of the Great Depression. Started in 1932 and finished in 1938, 60,000 pounds of dynamite were used to excavate the site while 72,000 cubic yards of dirt was spread to infill swamps, and 57,000 linear feet of drainage pipe was laid to drain the property. Up to 1,000 men were involved with the project from start to finish.

Lessons Learned When Hurricane Harvey Books a Tee Time at Your Golf Course
Pioneers of the Golf Industry: Old Tom Morris
To Top