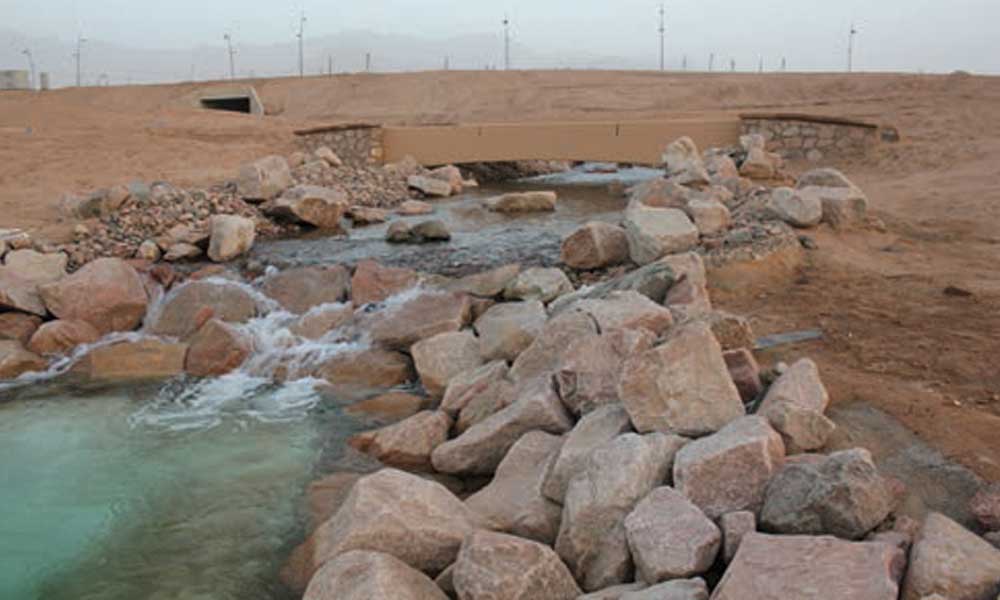 Always known for doing things in a big way, Greg Norman and Greg Norman Golf Course Design were a logical choice for golf course construction at Ayla Oasis, a master-planned, waterfront community that is currently under construction in Aqaba, Jordan. Defined by a series of man-made, salt water lagoons and islands, this visionary project is said to cost in excess of $1 billion USD.

Located at the very tip of the Gulf of Aqaba in the Red Sea, the project creatively expands Jordan’s natural shoreline. As a result, a new coastline is formed with the addition of some 19 miles of manmade frontage along an inland sea.

The community has been described as, “an Arabian Venice with turquoise lagoons and palm fringed islands.” Within the development, an approximate 1,000-acre complex, will be residential areas, hotels, a marina, parks, shopping and entertainment venues, restaurants and Jordan’s only 18-hole championship golf course, all currently in various phases of construction. At build out, the development will include more than 1,500 upscale hotel rooms and approximately 3,000 residential units.

Occupying roughly one quarter of the project’s land area is the Ayla Oasis Golf Course, which features a series of creeks and ponds that flow throughout the course. EP Aeration was chosen to design an aeration system for each of the course’s four lakes, which range in size from one to eight acres in surface area. The company’s task was to provide an effective system for maintaining a high level of water quality and algae control. EP Aeration also provided installation support and commissioning services at start up.

Company President and General Manager, Richard Dennis, described EP Aeration’s work on the project, saying, “We used our activated oxygen (ozone) aeration systems and linear aeration tubing to aerate all the ponds on the golf course.

“The total horsepower of the aeration system is 2.33 HP, which treats all of the ponds on the golf course. However, our units are modular, so there are mechanical units (air/ozone supply) spread throughout the property in proximity to the ponds they serve. The system keeps the ponds circulated and oxygenated to better control nuisance algae blooms and maintain aesthetics.”

Founded in 1991, EP Aeration serves a variety of markets from agriculture to commercial and residential developments to food service and, of course, to golf courses. For more than 24 years, this California based company has specialized in reducing, and in many cases eliminating, reliance on chemicals to prevent or treat water quality challenges. Services offered by EP Aeration include the development of environmentally responsible products and the design of effective and energy efficient wastewater treatment systems for new facilities or the retrofitting of existing facilities. Also on board as part of the project team was the Austin, Texas, based water feature design company, Biscayne Services. For this project, water feature design included of all the mechanical pumping systems, filtration and lake aeration systems as well as the waterproof lining details, concrete lining details, lake edge details and natural rock waterfall details.

As Sam Bennington, Director at Biscayne Services observed, “Ayla Oasis was a very interesting project, essentially built in reverse from most golf courses. The water features had to be built first as they function as a part of the system that desalinates the well water for use as irrigation water.”

The process Bennington is describing begins with 16 irrigation wells that draw brackish water from the aquifer. Some of the wells were already in place before the project began, but most had to be drilled specifically for this purpose.

The well water, with its naturally high salt concentration, flows through the water features of the golf course as part of the course’s aesthetic design and then is fed through a reverse osmosis system for desalination. From there, the water–now fresh water–is routed into a large storage lake and ultimately used to irrigate turf and landscaping on the course.

Greg Norman has described his vision for Ayla Oasis as a sustainable golf course that will provide a haven for wildlife and an opportunity to showcase local flora and fauna. With water resource conservation and environmental responsibility in mind, the project includes a sub-surface irrigation system to reduce evaporation and water loss as well as a carefully chosen selection of trees and shrubs indigenous to the local area, all selected to reduce the course’s need and dependency on irrigation.

One of the many unique aspects of the water elements at the course is a timed “flood” event that simulates a rapid flood in a natural wadi (dry riverbed). This feature also works to help clean the shallow streams on the course, which have minimal elevation change across them.

Said Norman, “The wadi and lagoons are a lure to a variety of fish and sea creatures. The water is so clear it is already bringing sea horses, spotted eagle rays, a whale shark and various fish species to the crystalline lagoons.”

The intent of Greg Norman is that the Ayla Oasis Golf Course will be one of the top three, if not the number one, most eco-friendly golf courses in the world. Norman explained his philosophy in a statement to the press, “Whether we or Ayla had all the money in the world to irrigate the golf course as we pleased, we would both still adopt the same methods in conserving every drop of water we can; we both have the same environmentally sensitive mentality.”

With so much attention on the thoughtful use of water resources, it is no surprise that the golf course will be powered to a large degree by solar energy. A dedicated 2.5-megawatt photovoltaic plant will provide power throughout the golf course. Photovoltaic plants are also sometimes referred to as solar parks or solar farms. Included in the equipment and structures to utilize this energy generated by solar power will be:

• the brackish water wells
• the water treatment/desalination plant
• the water features, circulation and flood events
• irrigation pumping for the course
• the par-3 course
• driving range lighting
• the clubhouse and the golf academy
structures

Systems developed by EP Aeration have been used in thousands of golf course ponds during the company’s more than 20 years of operation, including use at Olympia Fields Country Club (site of 2003 United States Open Championship), Liberty National Golf Course, The Links at Spanish Bay and Indian Wells Golf Resort. In response to growing concerns about both the amount and quality of surface waters, EP Aeration has devoted its more than 40 years of collective water treatment experience to developing a product line that can sustainably address these issues.