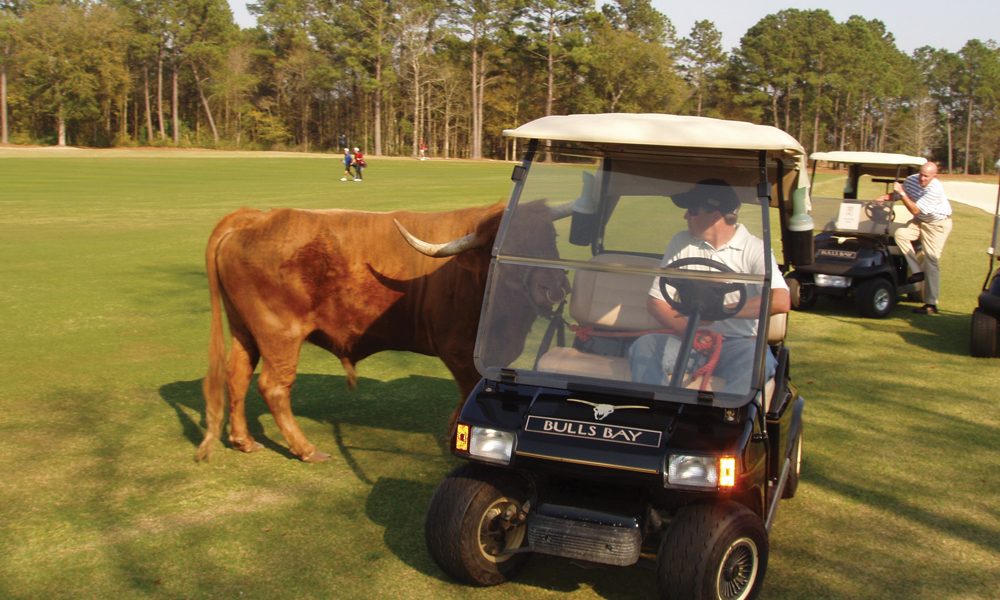 They called him the Maverick because of his burly frame, 10-gallon hat, and bushy moustache, but the moniker was even more fitting once you got to know him.

Golf architect Mike Strantz (1955-2005) was an incendiary talent, revered as much for his inimitable and indisputable golf design genius as he was for his infectious and outgoing personality. To know him was to revel in his sincerity and kindness, but also his puckish genius as a golf architect. Sadly, he was taken from us too soon by oral cancer; golf hasn’t endured the premature loss of such an incendiary talent since Seth Raynor died of pneumonia in 1926 at age 51. But Strantz left a precious legacy. Although only nine courses bear his name as a designer, each one is spoken of in holy whispers by the golf illuminati. 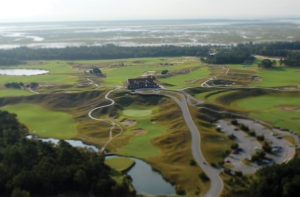 Strantz made a career out of building in the shadow of iconic masterpieces – and then equaling or bettering them with his own offerings. When he opened Caledonia and True Blue in the early 1990s, they immediately topped every Myrtle Beach rankings list, positions they’ve held ever since. Strantz’s wildly popular Tobacco Road, called “the most adventurous course in America” by Golf Magazine, is on everyone’s must play list when they visit North Carolina, admirably holding its own against mighty Pinehurst resort just a few miles away. And when given the chance to redesign Monterey Peninsula Country Club’s Shore Course, Strantz delivered his magnum opus, an cceanside marvel that proudly stands shoulder to shoulder with both Pebble Beach and Cypress Point, a third jewel in the sparkling Monterey diadem.

Then there’s Bulls Bay Golf Club, just a few miles south of Charleston, the place where Mike and his wife Heidi made their home and raised their children. Bulls Bay is a golfer’s dream: a low country setting with high-energy golf strategies and a membership which promotes and preserves a unique, uber-fun après golf: one uniquely Strantzian in its laid back charm.

Mike’s portrait hangs over the staircase in the entrance of the clubhouse and his touch is still everywhere at the club, so much so that members have shrines to his memory on their homes. Bulls Bay, refreshingly, is so unconcerned with pretensions that they play country and western music in the locker room (Reba McIntyre) and classic rock on the practice range (The Who and Led Zeppelin). Denim is permitted – sometimes even encouraged! – and there are myriad stables nearby for riding.

The club even has a mascot – an enormous, yet perfectly docile bull appropriately named “Titleist,” who I nicknamed “The Number One Bull in Golf.” Often times he’s led from his course-side paddock to the 18th fairway, where he’s tethered with food and water, so that the golfers can pass by and wave to him. And when tournaments are held at the club, the winner gets to ride Titleist. Sadly, he passed in 2016, to be replaced by “Titleist 2.”

The bull also makes a great metaphor for the round as the course bucks like a rodeo steer from the first tee and the excitement doesn’t stop until your last putt drops. Fairways are wide, but approaches are tight to wildly curvaceous greens guarded by an assortment of deep bunkers: narrow trenches, yawning chasms, expansive wastes, even an “illusion bunker” at the first hole – a bunker that looks greenside, but is actually 30 yards short of the green. Rather than rough, Strantz chose closely-shaved chipping areas so that players had any number of greenside options. And with a treeless landscape, the banshee howl of the wind makes a mockery of yardages on the scorecard.

Best of all, it makes you think on every shot.

“It’s amazing the transformation, because this course started as a tomato field with just four feet of elevation change,” said Strantz’s design associate, Forrest Fezler, who together with Strantz and course owner Joe Rice roamed the property on horseback looking for green sites and a routing that maximized the views of the nearby waterway as well.

“You know Mike – he wants to be different from everybody else. So he says, ‘If we get high enough, we can see the Intercoastal Waterway from the clubhouse,’” explained Fezler. “Joe said go for it, so we fired up the dozers and pushed dirt, piling it up and piling it up until when we stood on the hill we could see the waterway. Then we put the clubhouse on top,” he concluded.

As a result, a whopping 14 holes are visible from the clubhouse. Moreover, the course returns at the par-3 14th as well as at nine and 18, and each of those holes has its green sitting in a natural amphitheatre, convenient for spectators. In all, 2,000,000 cubic yards of earth were moved, but it looks eminently natural as Strantz carefully tied the grade to the natural surrounds the entire length of every hole.

The routing soars to an early crescendo, then maintains the energy for the rest of the round with one rousing chorus after another. The par-5 second hole is a unique Strantz template: a horseshoe par-5 curving like a scimitar counter-clockwise around a lake. (He reverses this theme at the par-5 13th, an equally beguiling horseshoe turning clockwise instead.)

The shortest hole on the course follows, the par-3 third, leading to the edge of the Intercoastal Waterway. Don’t fall asleep on its mere 170/150 yard length. The green is guarded by deep and narrow trenches too small for one angry man and his wedge. During the annual Hootie and the Blowfish Intercollegiate NCAA tournament, it sometimes plays the hardest to par on the entire golf course.

A back-to-back par-5, par-4 sequence follows, playing along the rolling surf. This is the moment of grace, that idyllic peace that transports you away from the cares and traffic if the world. The sense of seclusion and a unity with nature overwhelms you. It’s a transcendent moment, when golf becomes secondary to communing with nature: the edge of the world is beckoning.

You don’t ever want to leave.

The third par-5 in six holes turns back toward the clubhouse (there are five par-5s and five par-3s at Bulls Bay, offering greater variety than the most course which pay false homage to the pedestrian, symmetrical 36-36=72 routings with two par-5s and 3s on each side). A par-3 over water and a short, but dangerous par-4 precede the mighty ninth, climbing all 72 feet back to the clubhouse, its green sitting in a natural bowl. The back nine is equally enchanting, climaxing in the shadow of the clubhouse, the members enjoying libations in comfortable chairs as they watch other players finish.

But Bulls Bay is truly unique because the infectious love of the game that Mike had is shared by the members and staff alike. There are selfless golf clubs out there – clubs are defined more by their ethos, their altruism, and their camaraderie than their opulence or their membership roll. Blls Bay is one: There’s an electricity there that a true Mike Strantz fan taps into because the club still channels Mike and his unforgettable energy. It’s the overriding consideration to everything they do.

“We just say to ourselves, ‘We’ll do what Mike would have done?’” said Fezler. “It works every time.”