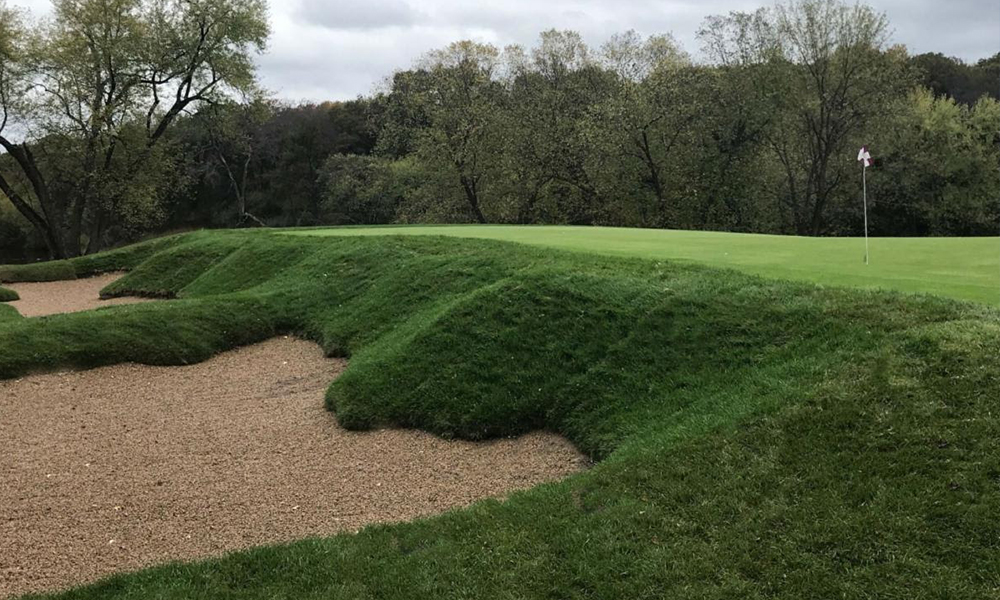 The most frequent questions I get these days pertain to bunker liners; Which one is the best? What do they cost? Do they really work? I remember a contractor told me some 10 years ago that many of their projects they were doing involved installing bunker liners and he commented “in a few years we’re going to be taking all of those fabric bunker liners out”. Well that was back in the early days of bunker liners and, to some degree, he was right. We know that fabric liners have some drawbacks. However, we now have some two dozen different options including Better Billy Bunker, Klingstone, Capillary Concrete, Bunker Solutions, Polylast, Flexxcape and sod bunker liners (see below). As I mentioned in one of my earlier newsletters, all of these have pros and cons. Some are more expensive. Some have issues with installation during the rainy season or with morning dew. Some create issues with perched water tables and some are easier to install in-house. Bunker liners also require you to probe your sand depths regularly to avoid damage to golf clubs or damage from mechanically raking (sand pro).

I’m still a fan of designing bunkers that fit the maintenance budget, the weather and the soil conditions of a particular course. In my experience, nearly all bunker sand contamination comes from two things – from water washing debris or silt into the bunker or from damage by mechanical raking. Contrary to what some think, contamination doesn’t come from below unless material is brought up by the sand pro. Bunker liner manufacturers would like you to believe it does but we’ve renovated bunkers that have been in place for 30 years and the bottom layer of sand is often as clean as the day it was installed. What we usually find is alternating layers of sand and silt from decades of contamination and adding sand.

So, in part, the key is to make sure that water doesn’t run into the bunker where it can erode the edges or bring in foreign debris. We’ve been building bunkers without liners for decades so we know, if the bunker is built properly and maintained properly, the bunker sand can last for 10 years or more. Don’t leave your bunker edges exposed. As water runs into the bunkers it will erode those exposed edges and contaminate your bunkers prematurely.

The other primary cause of contamination is damage mechanical raking. I sometimes hear from superintendents that they don’t have the manpower or the budget to hand-rake their bunkers. When you’re on a limited maintenance budget and your bunkers are 2,000+ square feet it is hard to consider hand raking. But, if your renovation includes making the bunkers smaller and designing them so the sand doesn’t erode, hand raking might be the answer. It takes as long to mechanically rake a 2,000 sf bunker and touch up the edges as it does to hand rake a 1,000 sf bunker – and your bunker sand will last longer because your seasonal help won’t be nicking the bunker edges and contaminating the sand.

If you have any questions or comments, please feel free to call me at (952)361-0644 or email me at kevin@NorbyGolf.com. You can also visit our website at www.NorbyGolfDesign.com. Thank you.