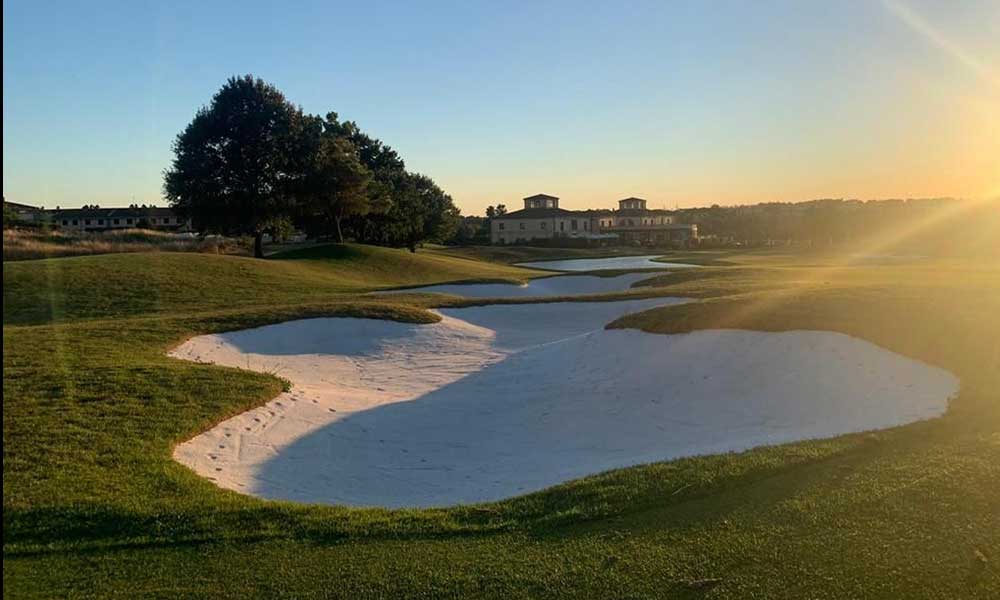 Although the Covid-19 pandemic means it will have to wait another year until it hosts the Ryder Cup, preparation of the Marco Simone course in Rome continues apace. All eighteen holes of the new-look course, designed by European Golf Design, opened for member and guest play earlier this month. And Dave Sampson, of European Golf Design, says the course’s bunkers, which have been built using the Capillary Bunkers lining system, are performing particularly well.

“The first nine holes – actually the back nine of the course – started construction in August 2018, and were all grassed by the end of summer 2019,” says Sampson. “A couple of major storm events set those holes back a little, but they were all in play last summer. The second phase of construction started in autumn 2019 and finished during summer 2020. Phase three, the practice greens, is currently being finished, though architect Sampson, prevented from visiting the site by the pandemic, has been approving the works via drone footage. The course is planned to make its public bow this September when it plays host to the European Tour’s Italian Open.

Sampson says: “We have been in daily contact with the guys from contractor SOL Golf who have been on-site, so finishing the final greens remotely has been OK. Nothing of the original course has been retained – every hole except for the sixth plays in a new corridor.”

He adds that the choice of Capillary Bunkers as a liner was an easy one. “I have had really good success with Capillary on previous projects, including the Evian resort in France and Crans-sur-Sierre in Switzerland,” he explains. “Evian and Marco Simone have quite a lot in common, in terms of weather patterns, so it was a pretty good model. The amount of maintenance time post storms is minimal compared to what it was before.”

Designing a course for a Ryder Cup is rather different from building a normal course, Sampson says: “On a normal project, you’d be looking for the best eighteen holes, pure and simple. Here, you’re looking for the best eighteen holes that can deal with 50,000 spectators. So the routing is quite challenging, but that said, there are not long walks between greens and tees. This is a 27-hole project, so the extra nine gives us space for the range, the spectator village, and the like. And you need to build the course to be extra resilient in terms of weather – there isn’t a lot of extra daylight to play with given the time of year a Ryder Cup is played, so the course needs to be playable quickly even in the event of severe weather. That’s one of the benefits of using a liner like Capillary Bunkers.”