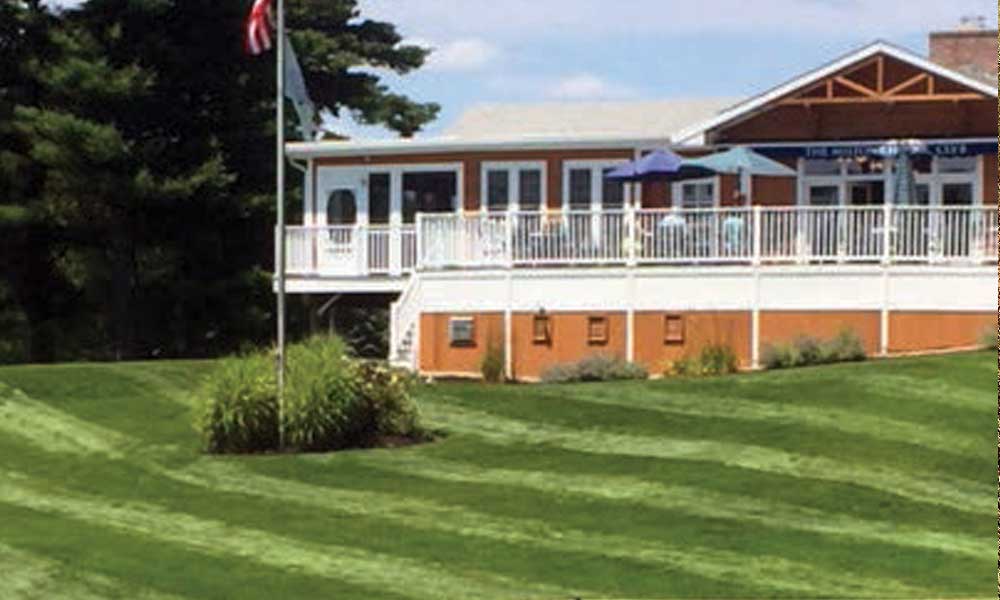 Editor’s note: The following is the first in a series of profiles on Canton’s golf courses. The series kicks off with a look at the Milton-Hoosic Club, a historic nine-hole course located on Greenlodge Street.

With its roots in the golfing boom of the late 19th century and a design pedigree tracing back to renowned golf course architect and golfing legend Willie Park Jr., the Milton-Hoosic Club in Canton stands apart as one of the region’s oldest and most highly regarded nine-hole courses.

Tucked away on Greenlodge Street amid a sprawling pine forest, the private, member-owned course boasts a challenging yet accessible layout that makes good use of the natural topography. Par for the course is 35 with a total distance of 2,950 yards. The grounds are well-maintained and it is a real source of pride for the club’s roughly 325 members.
“We tend to position ourselves in the marketplace as a family-oriented golf club,” said Mike Nemetz, a member of the club’s board of governors. “We’re nine holes; we have family night down there on Sunday night. So we try to cater to not just really good golfers but golfers of all types.”

Nemetz said the Milton-Hoosic, which also has a pool, tennis courts, and clubhouses in Canton and Milton, is more casual than many of the other private country clubs in the area; yet the standards for a high-quality golf experience are no less exacting.

As evidence of this, Nemetz points to the comprehensive master plan that the club commissioned last fall. Completed in January by Robert McNeil of the Northeast Golf Company, the new master plan provides the club with a working document outlining recommended improvements to all aspects of the golf course.

Key objectives of the master plan include embracing the course’s historic pedigree; enhancing the quality of the course for the playing membership; identifying solutions for problematic issues; improving playability for all skill levels; improving practice amenities; and establishing a “look and feel that is uniquely Milton Hoosic.”

“It’s a strategic plan of what you want to do to make your course better,” explained Nemetz, who served as chair of the Master Plan Committee. “Because we compete for members with other private courses, and this is one of our biggest assets, we said, ’How do we make our biggest asset more enjoyable for all and appealing to all?”

Veteran golf course superintendent Jeff Urquhart said the master plan incorporated several suggestions from the greens committee as well as the general membership and provides a long-term vision for how the course can be improved from the perspective of a seasoned professional.

“This is using a third party, an architect, who knows what he’s doing and telling us what the course needs based on our requests and our questions and the history,” he said.

Urquhart said it’s not enough to simply maintain the course as it is “constantly changing.”
“It’s one big, living biomass, if you want to think of it that way,” he said. “Trees get bigger, grass grows, bunkers fill in, they change their dynamic. So it’s not a restoration; it’s not a renovation. It’s an enhancement. Call it a facelift if you want.”

Among the improvements recommended by McNeil are the thinning and removal of trees, the addition of new and varied tee locations, expansion of greens, and the rerouting of cart paths. McNeil also recommends constructing a new practice green complex that ties into the existing first tee as well as a bunker maintenance program that strives for a “soft recapturing of the classic styling from the course’s origins.”
That classic styling, according to McNeil, is most visible in the “crossing” or perpendicular bunkers that are a hallmark of Willie Park Jr. designs. He pointed to the crossing hazards on holes 5 and 7 as examples and suggested a repositioning of other bunkers on the course to better achieve this signature style. He also found a “lost” crossing bunker on the ninth hole that the club decided to reinstate this spring.

Generally speaking, McNeil found that Park Jr. – a two-time British Open champion who went on to become one of the world’s most respected golf course architects – clearly left an imprint at Milton-Hoosic. Hired in 1916, Park Jr. added three holes to the “modest short course” that had existed since the 1890s and redesigned the others, resulting in the current layout that exists to this day.

As for the history of the club itself, the Milton-Hoosic actually began as two clubs – the Milton Club, founded in 1891, and the Hoosic-Whisick Club, founded a year later in 1892. The two eventually merged in 1946, and according to club historian Dick Dray, the “marriage of both clubs was predictable … dictated to a large degree by the events of the war years.”

Following the merger, the social and recreational center of the club shifted to the Canton site, where the popularity of golf, tennis, and family events such as “Donkey Day” surged in the post-war years. The club did, however, retain ownership of the clubhouse in Milton, and the facility remains a popular venue for weddings, reunions, and other large gatherings.

Today, the club is thriving, with a membership that’s on the high end for a nine-hole golf course and a growing junior program led by club pro Todd Cook.

“We’re playing more rounds this year than we’ve ever played,” said Nemetz. “But we don’t have tee times – you can just walk up here and go play, which is part of the family, casual aspect of it.”

Nemetz said the club recently instituted a waiting list, but the list is in flux and membership opportunities can and do arise. He said the club also offers a trial membership, where an individual can pay the first year’s dues and try it to see if the club is right for him or her.

“We want to make sure people are committed to the club and are willing to support it,” he said. “I think you join a private club because you want a little bit of camaraderie, but you also want to go out and play with your buddies on a regular basis, or sit at the pool with somebody you like or have a beer here.”