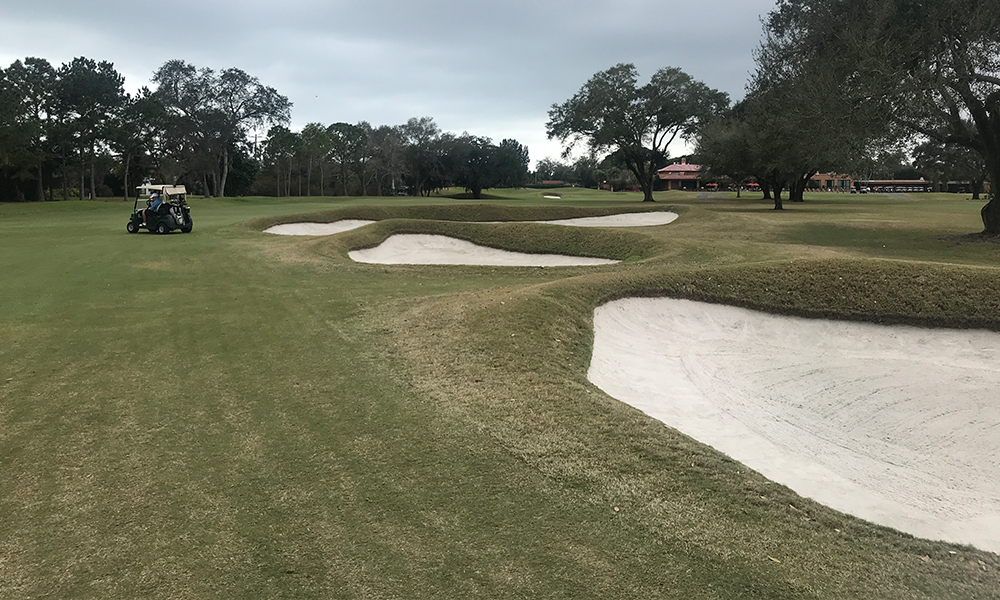 The Sarabay Country Club in Sarasota, Florida, is coming to the end of a project aimed at restoring the course to its 1926 Donald Ross-designed origins.

Noted Ross specialist architect Kris Spence has been working with Sarabay for several years. He says: “Sara Bay is particularly interesting because Ross was closely involved with the development of the club and the associated real estate.”

In its very early days, Bobby Jones – then at the height of his powers – was hired to act as assistant sales manager for the real estate, and shortly after the club opened in early 1926, Jones played a match against Walter Hagen – the world’s top amateur and professional. Jones recorded in his memoirs that the ‘Great Match was ‘the worst drubbing that he suffered in his career’, but aso noted that course, then known as Whitfield Estates, was one of the best in America.

“Over the years, the Ross design elements had been lost at Sarabay,” says Spence. “The greens had become excessively domed, and balls would not stay on them – which was obviously making life difficult for the members! In 2018, we rebuilt the greens, and found they had twice as much rootzone as they needed, which meant we were able to lower them back to their original grade, and expand them back to the edge of the fill pads. We also rebuilt the greenside bunkers, using the Capillary Bunkers liner system.”

Given the Florida climate – hot and wet in the summer – Sarabay’s bunkers have a tough time. “We had ten inches of rain over the course of thirty days in June, and seven of those inches came down in two days,” says golf course superintendent Carlyle Merring. “The bunkers stood up to it really well. We don’t have a problem with them washing out. The integrity of the product is holding strong – not failing in any sort of way, and the bunkers are functioning really well. Generally we can get our bunkers back in play in one morning after a big rain event.”

Merring says that his only real problem with bunkers now is sand contamination caused by algae growth. He is excited about the opportunity to try out the Capillary Wash Box, which prolongs the life of bunker sand by enabling it to be pressure washed to remove contaminents. “Potentially I think the Wash Box is going to be a game changer for us,” he says.

At the time, Sarabay, like so many clubs, was having a tough time, with membership levels not at capacity, and funds in short supply. Since then, however, the club has rebounded, and now has a waiting list, so has authorized a second phase of the restoration project. “We have returned to rebuild the fairway bunkers and also to add some surface contour to give the course back its lateral movement,” says Spence.

Once again, the bunkers are being lined with the Capillary Bunkers system. “Back in 2018, we discussed bunkers with the club, and they said they were spending a lot of money pushing sand back up the faces after rains, and contamination of the sand was reducing their lifespan,” says Spence. “The Capillary Bunkers we installed then are doing much better, and saving the club a lot of money. It was a great success, and so the club wanted to do the same this time around. I use Capillary Bunkers almost exclusively on my projects now. It is quicker and easier to install than competing systems. The bunkers are the key to getting projects finished – everything depends on being able to get the liner in – you can’t sod around them or put sand in them until the liner is done.”

Construction of the bunkers has been carefully managed to ensure the course can remain open during the project, which finished in early July. “We want to take Sarabay back to its past,” says Spence. “Ross was in one of his best creative moods when he designed those greens!”