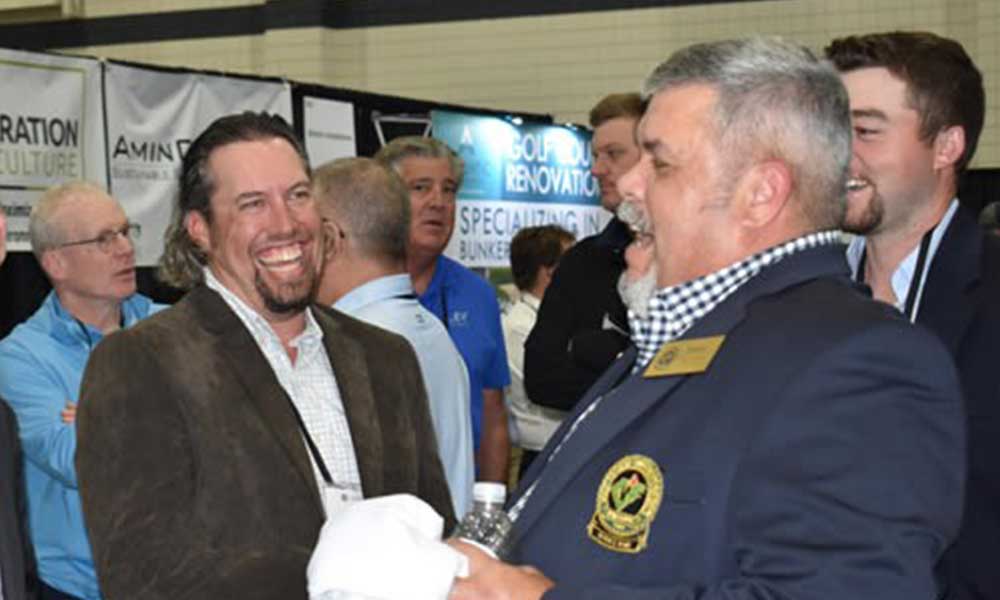 Camaraderie is MVP At Comeback Show

Just as golf boomed since the onset of the pandemic, so did the return of the Carolinas GCSA Conference and Show in Myrtle Beach, SC this week. Numbers in all categories were strong without breaking records, but even so, executive director, Tim Kreger, called it: “The best show we’ve had in my time.”

“There was a need for education for sure, but we saw all week just how much it meant to people to be together again,” he says. “Our industry partners do superintendents great service year in and year out, in the field and at Conference and Show, but their support might never have meant as much as it did by making this particular show possible.”

Kreger said the energy and excitement from showgoers were palpable from Sunday through to the closing of the trade show Wednesday afternoon. “We needed a strong show financially and we got one,” he said. “But I think the fact we were able to bring everyone together was even more important. The camaraderie this week was incredible.”

As the new president, Billy Bagwell, said after his election (see story below): “Last year, we saw how quickly things change and how quickly it can all be taken away. But this association is strong, and it’s made up of incredible people…who don’t back away from a challenge. We overcame the challenge COVID-19 presented and we came out on the other side better and stronger than we’ve ever been.” See you back at the Beach for next year’s show from November 14 to 16.

Bagwell Takes Over As President No. 48

Billy Bagwell, from Callawassie Island Club in Okatie, SC is the 48th president of the Carolinas GCSA. Bagwell, 36, was elected at the association’s annual business meeting yesterday, taking over from Brian Stiehler, CGCS, MG from Highlands Country Club in Highlands, NC. His first act was to pay tribute to Stiehler’s leadership over the course of the pandemic.

“Brian was given the most challenging presidency in our association’s history,” Bagwell said. “But I can’t think of a better person to be at the helm over the past two years…We wouldn’t be standing here in the shape we are today if it was not for the leadership you provided.”

Bagwell also thanked several mentors including past presidents Don Garrett, CGCS from The Walker Course at Clemson University, and Adam Charles, from The Preserve at Verdae in Greenville, SC. During studies at Clemson, Bagwell worked for Garrett, as did Charles at the time as assistant superintendent. “Adam taught me how to walk mow greens,” Bagwell said later. “But only after he made me edge heads and change cups for an entire year!” Members also elected a new vice-president, Chuck Connolly, from Smithfields Country Club in Easley, SC, and a new secretary-treasurer, Pete Gerdon, from Grandfather Golf and Country Club in Linville, NC. The sole newcomer to the board of directors, Jeremy Boone, CGCS from Springdale at Cold Mountain, in Canton, NC, is actually an “old-timer.” Boone served on the board from 2007 to 2012.

DSA Winner Brandenburg An “Idol” and a “Saint”

Distinguished Service Award recipient, Dr. Rick Brandenburg, is “truly a saint” and an “academic idol,” not to mention being “witty” and “silver-tongued.” Those were just some of the glowing terms used by Dr. Jim Kerns, when he presented the award to his North Carolina State University colleague, yesterday. “Everything he does is just amazing,” Kerns said.

Brandenburg entered the golf scene in the Carolinas in 1985 as a professor of entomology and his presence has grown in tandem with the industry every step of the way since. His research has led to books, countless presentations and carried him to nearly 50 different countries. He was made a Fellow of the Entomological Society of America in 2004 and named William Neal Reynolds Distinguished Professor by NC State in 2007.

As Kerns said, one of Brandenburg’s most enduring legacies exists with the Center for Turfgrass Environmental Research and Education at NC State, which he established with NC State colleague, Dr. Fred Yelverton, in 2001. Brandenburg was also busy earlier in the day as a featured speaker at the annual fellowship breakfast presented in partnership with New Life Turf and Corbin Turf and Ornamental Supply. He spoke movingly about his brush with death after complications from treatment for malaria, which he contracted on a research visit to Malawi.

If anyone questions just how tight the bonds are within the Carolinas GCSA fraternity, they only needed to be at the 27 Hole Challenge on the trade show floor yesterday. Within seconds of having his name drawn as the $3,000 grand prize winner, industry veteran, Andy Apple, donated the money to Scott Martin, CGCS to help cover medical costs incurred during his extended battle with COVID-19.

“Scott’s a good friend of mine. We go back a long way,” said Apple, vice-president, and director of agronomy with Atlantic Golf Management. Indeed, they do. Growing up near Greensboro, NC they played high school golf against each other. This is the first Conference and Show that Martin, who works with Corbin Turf and Ornamental Supply, has missed since his first in 1993.

“Can you believe that! That’s just wonderful,” Turner Revels, of Revels Turf and Tractor, said after presenting the check and hearing what Apple planned to do with the money. The 27-Hole Challenge is presented in partnership with John Deere Golf, Greenville Turf, and Tractor and Revels Turf and Tractor. Kevin McCamy, CGCS from Coharie Country Club in Clinton, NC took home the $ 2,000-second prize in the annual giveaway.

With a successful Conference and Show now done and dusted, attention turns to what’s next for the Carolinas GCSA and that involves a trip to Dataw Island Club in the new year. After a year off because of the pandemic, the Carolinas GCSA Winter Meeting returns on January 9 and 10, and with it, the assistant superintendent golf championship.

The winner of the championship earns a place on the Carolinas team for the 2022 Virlina Cup, which will be contested in South Carolina in October. Dataw, which sits close to Beaufort, features two courses – Cotton Dike, designed by Tom Fazio, and Morgan River, designed by Arthur Hills. Both are recently renovated.

Hosts for the event are the director of golf course maintenance, Brian Hollingsworth, CGCS, and superintendents, Chris Newnham and Kevyn Towery, CGCS.

Then on March 14 and 15 is the long-awaited visit to Lonnie Poole Golf Course at NC State in Raleigh, NC for the Southeast Regional Conference. The Carolinas GCSA was set to head to Lonnie Poole for the event last year until the pandemic forced its cancellation. Carolinas GCSA director, Brian Green, is director of golf course maintenance at the Arnold Palmer design that opened in 2009 and is one of just two college courses in the country that carries designation as a Certified Silver Audubon International Signature Sanctuary.