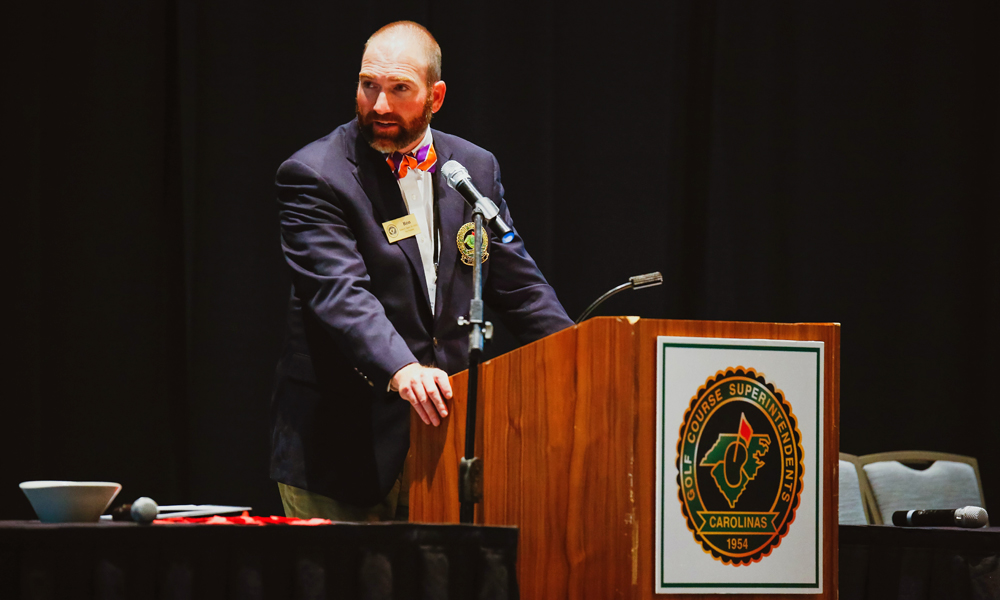 Golf continues its climb back towards good health if the Carolinas Golf Course Superintendents Association’s annual Conference and Trade Show is any indication. This year’s event in Myrtle Beach, SC mid-November attracted the highest level of exhibitor support since the Great Recession. A total of 217 individual companies occupied 407 booth spaces, the most in both categories since 2008.

“What we are seeing is a reflection of more clubs and courses investing in their properties once again,” says Carolinas GCSA executive director Tim Kreger. “Business has not only stopped the slide at many facilities, it is picking up again to the point where it makes sense to put money back into the course. When that is happening, companies want to be seen and our show affords them the best opportunity to do that in the southeast.”

Kreger’s observations are supported by National Golf Foundation data which show the two Carolinas states among the five busiest in the country when it comes to course renovations over the past five years. This year’s Conference and Show also saw a small increase in overall attendance, which has remained remarkably stable at the three-day gathering since the recession. Attendance over the past decade has ranged from a high of 2,018 in 2008 to a low of 1,867 in 2009. This year’s total attendance was 1,934.

“One thing people will always respond to is value and our event certainly offers that because of its timing and the pricing we can offer, whether it’s education, golf, or hotels,” Kreger says. “I think that and the fact that our vendors and exhibitors are truly committed to the health of the industry, not just their company, is why our show has been able to thrive through a time when others have not been so fortunate.”

The association also bestowed life-membership status on five superintendents retiring this year after a minimum of 25 years as members of the Carolinas GCSA. They were Ray Avery from The Club at Longview in Weddington, NC; Matthew Bunch from Edgewater Golf Club in Lancaster, SC; Sonny Holcombe, CGCS from Woodside Plantation Country Club in Aiken, SC; Butch Sheffield, CGCS from North Ridge Country Club in Raleigh, NC and Bob Young III, CGCS from Carolina Country Club, also in Raleigh, NC.

The association also recognized Dr. Bruce Martin who will retire from Clemson University next summer after more than 30 years in plant pathology. Martin is a past winner of the Distinguished Service Award and was once voted one of the 10 most important people in South Carolina golf. BASF’s Willie Pennington was also recognized for his service to golf course superintendents over his more than 40-year career.

Another special guest who was also recognized at the annual business meeting was Palmer Maples, Jr., CGCS who attended 50 years after he became the Carolinas GCSA’s fifth president. Maples is a legendary figure in golf course maintenance after a career that included service at several prestigious clubs in the southeast and service as an educator. He was president of the Golf Course Superintendents Association of America in 1975.

Other highlights from the Carolinas GCSA Conference and Trade Show include: