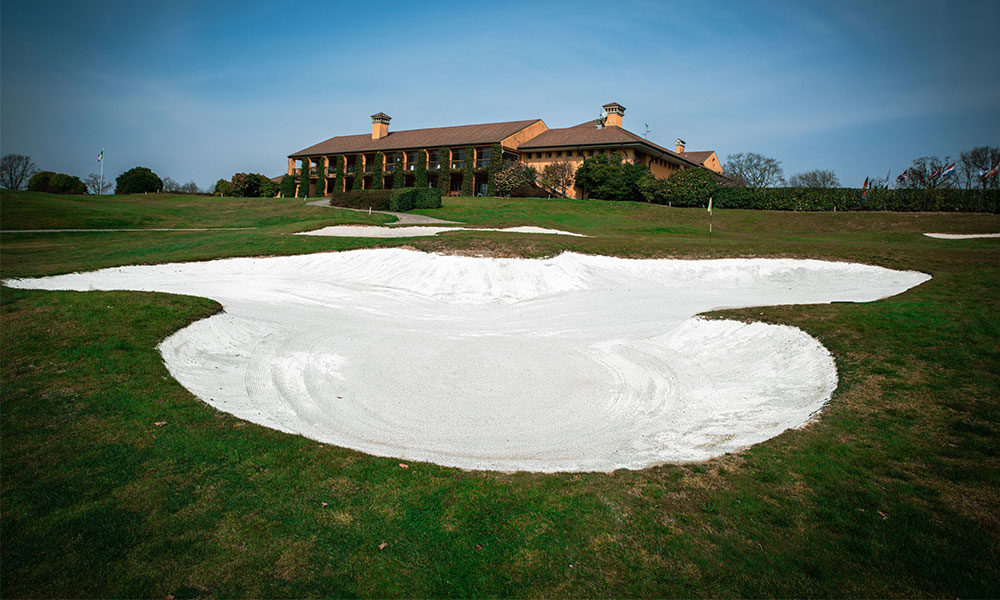 The Castelconturbia course in Piedmont, Italy, has completed phase one of a bunker upgrade that involved replacing drainage and adding the Capillary Bunkers liner system and associated Capillary Wash Box technology to the course’s greenside bunkers. Phase two of the project, which is expected to follow shortly, will see the fairway bunkers upgraded similarly.

Designed by Robert Trent Jones Sr., the 27-hole Castelconturbia complex opened in 1987. Located close to Lake Maggiore, about an hour from Milan, the club has twice played host to the Italian Open.

“Castelconturbia is the third Italian course to install Capillary Bunkers on the entire course, but the first to choose the Wash Box, which enables pressure washing of bunker sand, and thus helps keep sand quality high for longer,” says Edgardo Ticozzi of UNMACO, the Italian distributor for Capillary Bunkers. “It will help superintendent Alberto Peonia keep his sand white and clean.”

“For many years, Castelconturbia has been famous the bunkers built by Jones, but after more than thirty years, they needed to be rebuilt, especially those at the greensides,” says club general manage Giovanni Malcotti.

“Given the need to rebuild, and the cost of doing so, it was sensible for us to put in the best lining system we could find, to assure us that water would not remain in the bunkers after a storm, and reduce maintenance demands. We tried out a number of different lining methods but none were as effective as Capillary Bunkers, and the price was also reasonable. When our contractor explained the beneifts of the Wash Box to us, it was an easy decision to add it, one we took in an instant.”

Phase two of the project will follow shortly. Italian contractor Giuseppe Scaffa has carried out the works.