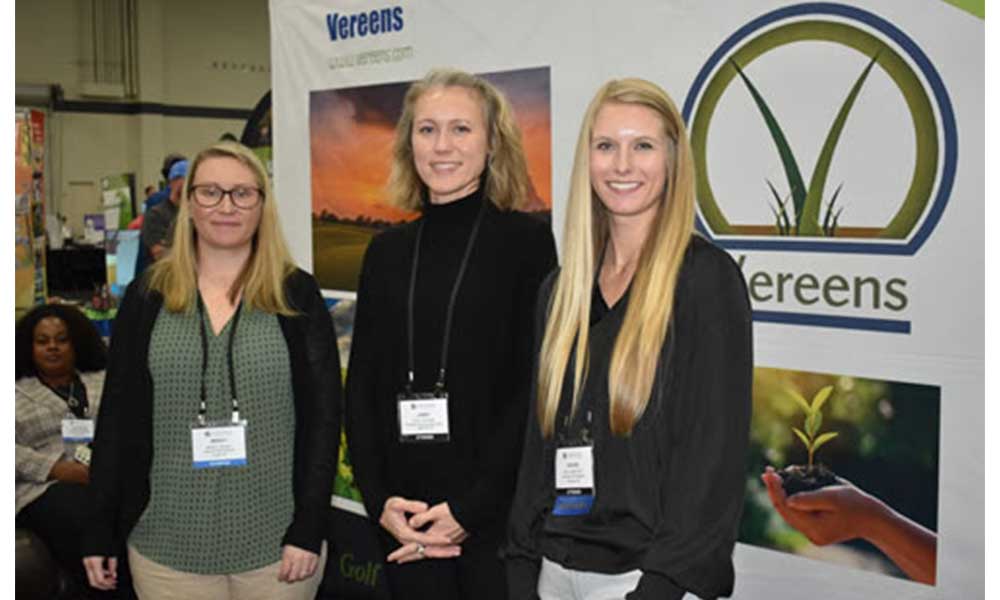 Golf course maintenance remains an overwhelmingly male industry but more and more women are forging careers on and around the golf course. A number of them gathered for a Women in Turf reception at the Vereens Turf Products booth at the CGCSA show in November.

Among those to visit the Vereens booth was Jamie Summers, golf course superintendent at Tara Golf Club at Savannah Lakes Village. Summers featured as the cover story of the September-October issue of Carolinas Green, which touched on the relative scarcity of women in superintendent ranks. The story cited GCSAA figures which showed of 18,500 members, only 54 were female Class A and B superintendents.

Some of the how and why of that is the case will be discussed during a presentation by Devon Carroll, Ph.D. from the University of Tennessee, at 8.15am during general sessions. Carroll’s presentation is informed partly by research she performed analyzing barriers for women in the turf industry and also examining opportunities.

Carroll contends the industry can do a better job of addressing concerns about the future superintendent workforce by recruiting women. “The grass doesn’t know whether it’s a man or a woman managing it,” she says. “We complain about labor but we’re not employing half the people out there.”

Women golf course maintenance professionals made a huge impression working at this year’s U.S. Women’s Open Championship at Pine Needles in Southern Pines, NC. A team of 30 women volunteers came from across the country to help David Fruchte, CGCS and his staff present the golf course for the best women players in the world.

Their presence generated a lot of media attention and left an overwhelming impression that they were having fun in the job and relishing the fact that they were not in a stark minority for once.