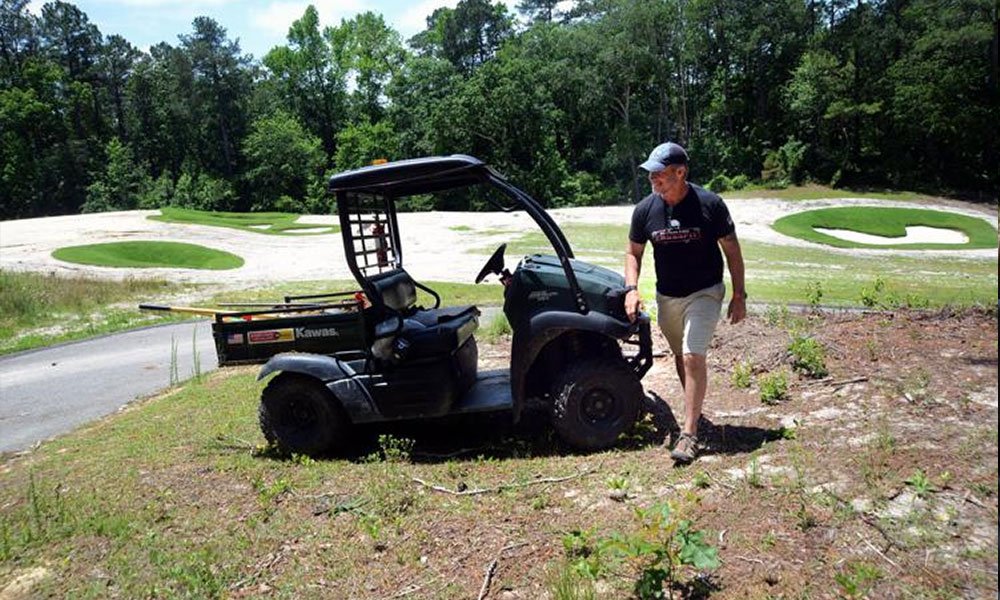 The gated community’s Ellis Maples-designed golf course is being restored to its former luster following years of neglect. Land surveyors and engineers have begun the process of rebuilding the dam that once held backwater in the community’s 1,200-acre lake, which has been empty since 2016.

“I’ve been able to see a lot of progress,” said Tony Cianchetta, whose home overlooks the 13th fairway of the golf course. “It’s a very positive thing to see crews out there working every day.”

Atlantic National Capital, the company that owns Woodlake, tabbed Kris Spence, a golf architect based in Oak Ridge, to oversee the course’s renovation. Work on the project began in earnest last September.

First opened in 1971, the 18-hole course fell into disrepair under the German company that previously owned Woodlake. The community is now run by Atlantic National Capital, a family-owned investment group led by Fayetteville businessman Keith Allison and his daughters.

In a phone interview on Tuesday, Allison said the course could be ready to reopen by fall.

“We don’t have a definite date yet,” he said. “It depends on the greens and the grass and the weather. But it should be sometime in the fall unless the grass has not taken as we’d like it to.”

Further on the horizon is the dam repair. The budget adopted by the state in November allocated $9.6 million for the project, but inflation has since driven up the cost.

“We have had some price increases on the dam and we’re working with the state on trying to increase the grant size to cover the increase in construction costs,” Allison said.

Concerns about flooding in the aftermath of Hurricane Matthew led state officials to drain the community’s centerpiece lake in 2016. The N.C. Department of Environmental Quality later ordered Woodlake CC Corp., the German company that owned the subdivision at the time, to breach the dam to prevent water from pooling in the lake.

When the company failed to comply with the order, DEQ decided to breach the dam on its own. But the department’s intervention had unintended consequences.

The breach is blamed for widespread flooding that occurred in areas downstream of Woodlake after Hurricane Florence in 2018. Spring Lake and parts of Fort Bragg were affected.

After Atlantic National Capital bought Woodlake at auction for $3.5 million in 2021, Allison began working with county officials and state lawmakers to secure funding for the dam’s repair.

The project was originally included in House Bill 500, or N.C. Disaster Relief and Flood Mitigation Act of 2021, but legislators were apprehensive about the bill’s $200 million price tag. They eventually decided to recast Woodlake as a standalone item in the budget.

In a recent post on Woodlake’s website, Atlantic National Capital wrote that crews have begun “boring and drilling for the initial steps required to obtain a full set of design and engineered plans to reconstruct the dam.” The company also wrote that drones would be deployed in the coming weeks to conduct a topographical survey of the lake’s shoreline.

But it will be some time before the water returns to the lake. Atlantic National Capital estimates the dam’s construction could “potentially take anywhere from 24 to 30 months.”

“The lake is kind of the center of gravity, really,” said Jon Laurich, a resident of Woodlake. “You bring the lake back and I’m optimistic that everything else will come along with it. You’ll have water to irrigate the golf course. You’ll have boating, fishing, swimming — all the things people in the community used to do.”

Allison said the population of Woodlake, which is currently home to about 2,000 people, is expected to grow in the months ahead. Ascot Corp., a homebuilder based in Whispering Pines, recently acquired 20 undeveloped lots in the subdivision.

“There’s a lot of activity going on,” Allison said. “There’s activity on the golf course, activity on developing houses and the renovation of existing buildings. There’s also activity with the dam, permitting, surveying, soil sampling, and testing. We’ve come a long way, and we’ve got all the boxes checked for a good future.”