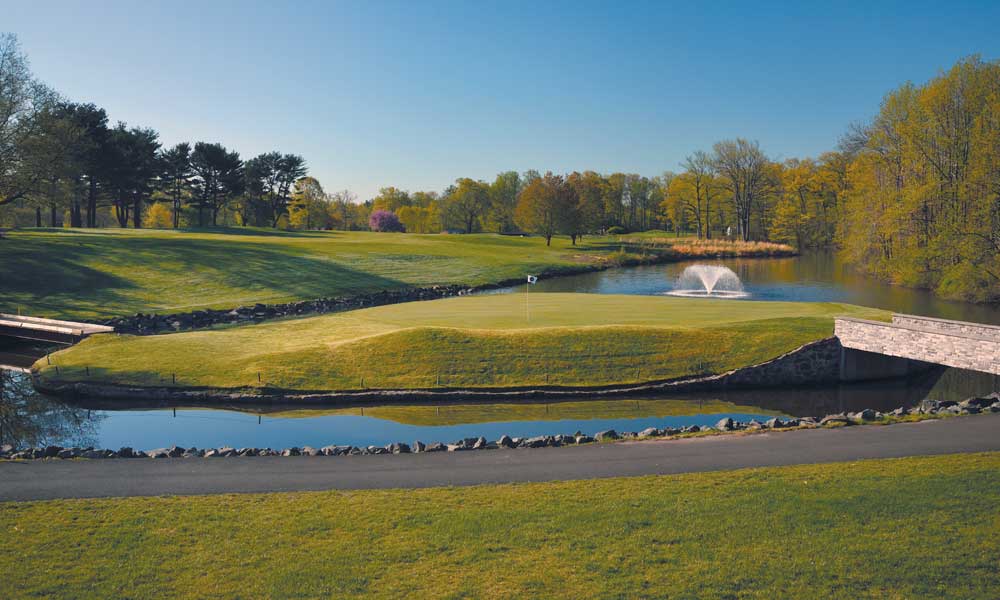 Is it golf course architecture or golf course archaeology? When discussing the wild success owner-developer-magnate Chris Schiavone and golf architect Stephen Kay have enjoyed resurrecting Golden Age golf courses and restoring/renovating them to their former glory it’s a worthy question. First, they spellbound the entire golf world with their work at Charles Banks’s Forsgate Country Club. In particular, they rebuilt one of the most celebrated greens in American golf to its full specifications, the 84-yard long Biarritz at 17 with its six-foot deep, 25-foot wide swale. To golf design fans, that was the golf equivalent of Heinrich Schliemann discovering Troy.

Now, for an encore, they’ve rejuvenated one of A.W. Tillinghast’s earliest designs, northern New Jersey’s Shackamaxon Golf Club, which he designed in 1916. And once again, a distressed Golden Age masterpiece that even many experts had overlooked or forgotten is now the toast of golfers everywhere. The club just celebrated its 100th anniversary in 2016, and its full ascension back into prominence still continues at a speedy pace.

“We’re not completely sure how early Shackamaxon is in Tillinghast’s career – it’s either his third or his fourth course – but it’s definitely one of the first 18 hole designs Tillie ever did,” explained Kay, once again easing into his other supreme talent: teaching about golf design. Remember: he’s the Professor at Rutgers University everybody wants to take when they’re trying to learn the golf design business. His former students are now head superintendents at places like Oakmont, Baltusrol, and Forsgate.

“Tillie had one of the broadest palettes of any golf course architect in the game’s history. His career spanned nearly 30 years, 400 courses, and numerous criss-crosses of the country. Here at Shackamaxon you get to see some of his first forays into ideas he’d later build at many of his great courses: things like diagonal bunkering and the flashed-faced sand bunkers he employed at San Francisco Golf Club, which he designed roughly around the same time,” Kay continued energetically. “Tillinghast courses are all different because he designed by being on the property and fitting the holes to the land as he found it, unlike Ross who used to design some courses through correspondence and drawings from time to time.”

As primordial Tillinghast, the course is an important mile marker; you get a clear look at the progression of an architect’s design ideas as you trace his chronology. As Kay noted, Shackamaxon represents the first time Tille flashed the faces of his bunkers as opposed to using sod faces. He carried this style forward to great effect just a few years later at Winged Foot and again at Baltimore Country Club (Five Farms), Philly Cricket (Wissahickon), as well as the aforementioned San Francisco Golf Club. He also began placing fairway bunkers in positions that made golfers attack the hole from diagonal angles rather than designing holes that were ramrod straight so that players were tested for both accuracy and distance control.

Now Tillinghast designed two types of courses: courses that would host large championships that would test professional players to the limit, and what Tillie called his “sporty courses” on the other. Sporty courses would in no way be inferior or afterthoughts or watered-down. They would still feature multiple options on every shot, fierce internal green contours, and the ability to use the ground game to get the ball close to the hole. Shack is one of his sporty courses, though it did once host a PGA Tour event – something called the “PGA Tour 1955 Cavalcade of Golf,” (a new event that year) – due to its remarkable length and relentless penal architecture. (It was 6,700+ yards back in 1916.)

Though several intervening architects did occasional work over the years before Schiavone and his RDC Group took over management, Shackamaxon was remarkably well preserved from when Tillie left it. With that good fortune, restoration and renovation were the order of the day rather than redesign. Design-wise, the club chose preservation over renovation wherever it could.

“We pulled the greens all the way back to the edges of their green pads, but other than that, we didn’t have to do anything. It’s original 1916 Tillinghast greens you’re playing on,” Kay noted enthusiastically.

Indeed, Shackamaxon’s greatest strength is its set of perfectly preserved Tillinghast greens, the centerpiece of the golf course; they have excellent macro and micro-movement, fascinating contours that affect every putt on the golf course.

“We have some seriously cool new tech that makes a huge difference in conditioning,” stated golf course superintendent Fred Parcells, a distant relative of Hall of Fame and two-time Super Bowl champion NFL football coach Bill Parcells. “We started about three years ago with a less disruptive aeration program. We purchased an Air2G2 machine and a walk behind Planet Air machine. These helped improve the surface drainage of our greens and get air into them with little or no disturbance. Both machines were used a lot this past summer with all the rain we got. We were able to get the greens to dry out a lot fast than in the past years.”

New tech aside, Shackamaxon is pretty much 1916 Tillinghast everything else. Other than the typical nips and tucks in vogue today, the course is all but untouched except for one new hole: born of necessity, but one which Tillie would be proud of. The club chose to turn the short par-4 13th hole into a par-3 Reef hole, one of Tillinghast’s rarest and most iconic template designs.

“We had to move the entrance road of the club, so we had to get rid of the short par-4 and make a par-3,” Kay explained. “So we looked at Tillie’s writings, and what he said about the Reef hole was perfect. It has options, strategy, and the ground game.

“At Shack, Tillie was obviously designing for the ground game, so we keep all approaches on the golf course fast and firm so you can play one bounce and on,” Kay continued. “That’s what they did back then, so that’s what we wanted to recreate here.”

Indeed, the ground game is pivotal to playing a Reef hole well. Like navigating a ship to shore through a reef, the fairway contours are used by the golfer to steer the ball around the bunkers and closer to the hole location. The slope of the terrain feeds the ball to the green.

The club’s choice of a Reef hole is also important architecturally because so few examples of the Reef hole exist: a mere handful nationwide even though Tillie was one of the most prolific designers in history. Paramount Country Club, Newport, Bethpage Blue, and the seventh at Baltursol Upper: they are rare indeed.

We know what Tillie didn’t make a habit of replicating in many other courses: an island green.

“The 18th hole is an island green,” confirmed Parcells, describing the most controversial hole not only on Shackamaxon, but perhaps on any Tillinghast course. A semi-blind fairway wood or long iron played right-to-left leaves a short iron or wedge into a green surrounded by a moat. And during the restoration process, it was a constant bone of contention where to sequence it in the round – nine or 18? Over the howling objection of some members, they chose 18.

“They have learned to like it,” Kay commented ominously.

Tough finish or no, Schiavone and Kay have their finger pressed firmly on the zeitgeist of modern golf architecture. Another rough diamond has been polished to a high shine. And once again, thanks to them, all golf is richer for it.