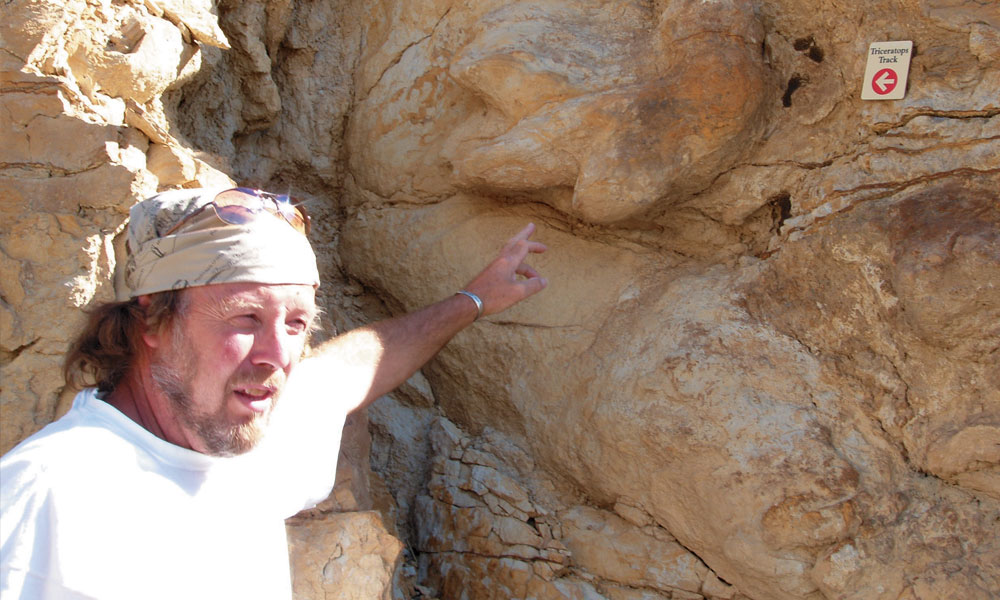 It’s tough to swing a golf club when you’re precariously balanced on the side of a sandstone rock 15 feet in the air, but that’s what you get when you hit your ball on top of a dinosaur fossil monument. 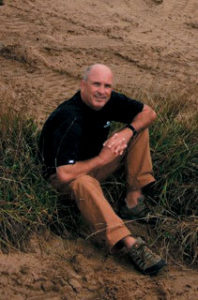 You read that correctly – a dinosaur fossil monument. Did I mention that the monument was in the middle of the fairway? Welcome to Fossil Trace Golf Club, in Golden, Colorado – the municipal course with the most unique hazards in golf.

“It took 64 million years to find the fossils, 12 years to build he golf course, and you’re trashing the place after 11 holes,” quipped Jim Engh, the golf course architect who designed Fossil Trace, laughing as he chased me up the side of the monument with my own gap wedge. “You hit it there. You play the ball where it lies!” he roared gleefully.

Half laughing and half terrified of plummeting to the ground and smearing like a floppy grape, I swung the club with dinosaur arms (think of your cheapest friend pretending to try to pick up a check), then gingerly hopped back to earth, but the thrill stayed with me to this day. Fossil Trace isn’t just a golf course; it’s golf’s proper rejoinder to the Museum of Natural History. You share the fairways 64 million year old fossils: footprints of Triceratops and Hadrasaurs (a cousin of the Velociraptor), prehistoric palm fronds, even the imprint of raindrops that fell to earth during the Mesozoic Era.

That’s about 225 million years ago, during the Triassic Period, for those of you scoring at home.

Actually, it’s a miracle we got anything at all. When environmentalists and scientists heard that the land where the archaeological treasures were located was being transferred from private to public hands, they united into a powerful bloc determined to protect the fossils. And when they heard it was a golf course that was proposed, you’d have thought every banshee in Ireland had descended upon eastern Colorado, shrieking all the cacophony of Hell.

They settled themselves in for a 12-year fight. Little did they know that the architect chosen to do the work was already intent on protecting the fossils just as ardently as they were.

“The first duty of a golf course architect is to protect and preserve what he finds in the land,” explained Engh. “I knew that we could build a course that not only avoided disturbing the fossils, but that promoted them and the rich heritage of the area.”

But it wasn’t just the fossils that were an issue. There were three other ecosystems on the 140 acre plot, each of which presented additional problems. The remnants of an old ceramic plant left hazardous waste in the form of fly ash littered across acres of the property. A storm water retention area was needed to protect the City of Golden from floods from run-off. And a lowland pond area posed different drainage issues from the rest of the property. 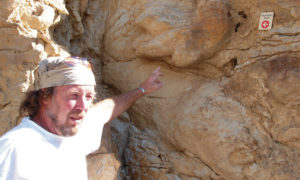 Dr. Martin Lockley of the University of Colorado-Denver

“Fossil Trace easily had the most trade-offs and environmental restrictions of all the sites I’ve worked on,” Engh continued. “It was complicated, but that’s what we signed on for.”

Indeed, Engh’s name has become synonymous with complicated and creative problem solving. He’s had remarkable success on particularly difficult sites. He’s handling myriad competing interests fairly and diplomatically. Most importantly he gets the course built on time and under budget every time.

In terms of wheeling and dealing to “get everyone to yes,” Fossil Trace may be his magnum opus. It took a dozen years, but with patience, open-heartedness, a genuine desire to help both sides accomplish their goals, Engh turned his critics and opposition into allies. Dr. Martin Lockley of the University of Colorado-Denver and paleontologist T. Canner started as his opposition, but ended up on site at the golf course not only working the dig, but escorting VIPs, friends, scientists, and golfers on tours around the monuments. Lockley is every bit a real-life Indiana Jones, just with a t-shirt and a bandana. Canner, an equally brilliant paleontologist, wears a Bolo tie, a 10-gallon hat, and looks like he could be an extra in “The Blues Brothers” movie, shouting out “That ain’t no Hank Williams song!” But together science and golf showed the world the state-of-the-art in both fields as strange, yet successful bedfellows.

Engh won them over in two ways. First he kept communication open at all times and was completely transparent about anything and everything he did. Second, when the Army Corps of Engineers granted their imprimatur over his plans, it was like getting papal approval.

It’s tough to swing a golf club when you’re precariously balanced on the side of a sandstone rock 15 feet in the air, but that’s what you get when you hit your ball on top of a dinosaur fossil monument.

“That was the turning point; it counted for a lot” Engh admitted candidly. “We had detailed and painstaking scientific valuations done, and we proved to everyone we could carefully expose the fossils so the public could view them during their round.”

Every fell in line like dominos after that. The municipality approved Engh’s ideas for water retention, fairways and greens were carefully around the wetlands, and as for the fly ash, once again Engh had a novel solution. “We piled it up and put the 12th tee box on top of it.” 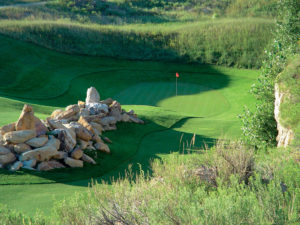 Similarly, Engh also left an old chimney from a former building in the middle of the first fairway and lines several other fairways with the old machinery left on the site by the former owners. Together they help imbue the course with its own natural character by recalling the site’s rich history.

From a design standpoint, Engh also had several refreshing new ideas. Never a slave to the tired Doctrine of Symmetry – where every course is par 36-36=72 with two par-5s and two par-3s on each side – Engh prefers to have five par-5s and 5 par-3s to give more variety to the round. He also developed his own inimitable style of bunkering, “muscle bunkers,” where the squiggly-shaped hazard is surrounded by sidewalls. At Fossil Trace (and many of Engh’s early designs) the bunker floors are below grade; they seem to almost sink beneath the fairways.

“I was playing Royal Portrush and saw how the land naturally caved into the bunkers. I liked how it looked and played, so I decided to go with it and accentuate the look of it by thirds,” Engh stated. “I liked the look of it and so we ran with it. Also, it’s easy to maintain because of the low volume of sand.

Later in his career, at the behest of persnickety older players who couldn’t enter and exit the bunkers easily, Engh began building the bunker floors at grade level, but built up the sidewalls above grade, although this had the trade-off of reducing airspace. Either way, muscle bunkers are appealing to the eye – a touch of Salvador Dali or Pablo Picasso brought to life on the course. They are also unique in the world of golf, one off the few completely fresh ideas in golf design in the last two decades.

Although he moved about 400,000 cubic yards of earth — a good amount — Engh still made the course flow naturally with the landscape. The course plays fast and firm like the links of Ireland and Scotland which Engh loves so much. Yet it also seamlessly hearkens back to the various periods in the land’s history. One of the Wonders of the Public Golf World, its greatest triumph is that is both public and affordable. And you neither have to travel to an island off the coast of Costa Rica to get your dinosaur fix, nor worry about the dinos coming to life to chase you around after you make a bogey.