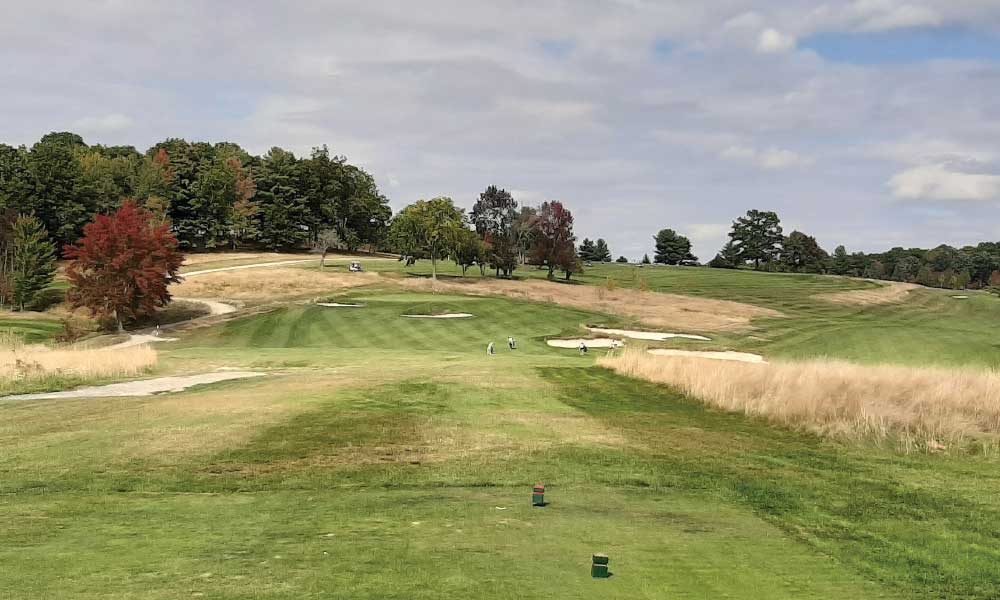 When you stand atop the 12th tee of Copake Country Club on an early fall day, the entire valley around you blazes with glory: burning vermillion, fiery orange, shimmering gold. Set within a bowl of varicolored hardwoods, Copake’s rumbling fairways traverse rugged ledges, its curvaceous greens cling to perilous precipices, and its broad, noble brow overlooks glimmering Copake Lake.

Savoring the elixir-like, forest-scented air, I scanned the countryside, reveling in the setting. To my left, the second fairway tumbled downhill between the Spectacles bunkers – two traps resembling the eyes of an alligator hiding in the water, waiting to pounce. A golfer, frozen in fear of embarrassing himself in front of the players on the nearby tee boxes and facing a dicey half-wedge pitch over the Spectacles, shanks his shot into the fescue instead. To my right, the group in front of us plays to the par-3 12th green, a small disc set dangerously on the edge of a seemingly bottomless drop-off. There’s a pained “AHHHHHHHH!” as a ball trickles into the greenside bunker. Far off in the distance the 14th fairway rises into a dizzying ascent. This confluence of holes is one of the course’s shockras – an old school, Golden Age crossover that provides an exciting mini-crescendo during the course of the round.

Such is Copake Country Club, the little 6,300-yard public golf course that punches far above its weight. Built in 1921 “by either Devereux Emmet or one of his design associates,” as restoration and renovation architect Mark Fine put it, and opened in 1922, Copake will celebrate its 100th anniversary next year looking and playing every bit as strategic as when Emmet and friends completed the course for Sam and Sidney Zasuly as part of their Camp Copake Lake Resort, one of the original Catskill Mountains, Borscht Circuit playgrounds that, decades later, gave us Grossinger’s and the Concord.

“The long history of Copake demands that respect be paid to this era of design,” as Fine put it, and that was the imprimatur behind the restoration and renovation – preserve, protect, and promote the strategic Golden Age features that the original architect left behind.

Emmet, who also designed such indelible masterpieces as Garden City Golf Club, Leatherstocking Golf Club, and Congressional’s Blue course, was a giant of American golf design and one of the quintessential architects of the Golden Age era.

“Our stone steeplechase walls that pepper some of the fairways are one indelible sign that Emmet was here,” explains Mark Anderson, head superintendent at Copake since 1998. Starting at Copake as a cart boy at the age of 12, as the club celebrates its 100th anniversary in 1922, Anderson will celebrate his 40th at Copake in various capacities.

“The greens shapes are a second way we can confirm Emmet’s influence. They are geometric figures that he also used elsewhere, but they are also severely canted in places and feature steep false fronts and false sides in other places. And forget about any putt over three feet being straight,” Anderson cautioned.

Indeed, the green complexes are the strength of the golf course and a great source of Copake’s character and strategy. Working backward from the crowned and canted greens is critical; you must leave yourself a makeable putt, so approaches, though often with a short club, still must be accurate or they may roll into perdition. Fairways blend seamlessly into the greens so you have myriad short game options: bump and run, pitch and check, lob, or putt, many of which can come rolling back to your feet or trundle into a bunker or swale if you mis-hit a pitch – totally characteristic of Emmet. Finally, Emmet loved back bunkers and old aerials reveal that nearly every hole had a back bunker at one time or another.

The runaway success of Fine’s work and Anderson’s stewardship is a testament to minimalism, and demonstrates conclusively that even with a limited budget a small public golf course can not only recall the former glory of its Golden Age heritage in a restoration, but maintain it financially going forward. In Copake’s case, they followed a tried and true formula that any course can follow: cut down trees that have no architectural purpose to create the open vistas and playing corridors of the original design. As a result, the turf got healthier and the long views across the valley that it opened up are breathtaking. The fast, firm conditions brought all of Emmet’s fairway and green undulations to life with ferocity. Best of all, people that were originally against cutting the trees down are now all totally glad the club did it when they saw the results.

“Mark Fine helped us reclaim our Golden Age past without putting his own stamp on it,” stated Anderson. “When you talk with him, he has a passion for golf design that you can feel. He loves studying the history of the courses and the style of the architects – whether it’s Emmet or or Tillinghast or Macdonald – and he gives your course back what was lost over time.”

As always Emmet’s par-5s are show-stoppers, and the collection at Copake are all thrilling. At the short par-5 fourth the tee shot must thread the needle through a chute of trees. The hole then boomerangs to the right, ascending steeply uphill. The false front is so severe, golfers have taken walks of shame in excess of fifty yards back down the fairway.

“A front pin on four is the hardest location on the golf course…absolute death. You can’t stop a downhill putt from going off the green,” warned Anderson. “That false front is such a great equalizer and again, Emmet was using optical illusions to defend par. There are many bunkers that are illusions on this course as well. They appear much closer to the green than they actually are.”

Anderson’s a perfect fit for Copake – an intelligent golf course needs a clever steward to sharpen the course to its finest edge, and Anderson has a deep background on that score. His first college degree was from Embry-Riddle Aeronautical University (Daytona Beach, Florida campus).

“I trained to be a jet pilot, and was planning to go the ROTC route, but my eyes weren’t good enough. Then I tried air traffic control, so my official degree is aviation business administration. My pro, Kyle Bell also graduated from the same college by the way,” Anderson confided. “I came back to this area and went to Cobleskill for plant science, and at the same time, I ascended to the head superposition here. I’ve been at one golf course my whole life!” he finished energetically.

Fine’s superb restoration and Anderson’s daily TLC have sparked Copake’s resurgence to prominence in the region.

“It’s the toughest little 6,300 yard golf course you’ll find,” agreed several local members after the round. Best of all, you can play for around $35; it’s perhaps the best bargain between Albany and New York City. Just 45 minutes from Albany, it’s perfect for a quick round on your way down to the City from points north and east.

Copake is exactly what we need more of in golf: an inexpensive public course you can play quickly, that isn’t overly long, and has fascinating green complexes and plenty of strategic options. At times they could use the services of a sharp-eyed ranger, but it’s nice to see that golf is leading the rally against Coronavirus, As we went to press, the National Golf Foundation released the news that rounds were up over 20% from this time last year. So if the price we pay to defeat Coronavirus is an extra twenty minutes at the golf course because more people are taking up the sport, that’s a win for all golfers.