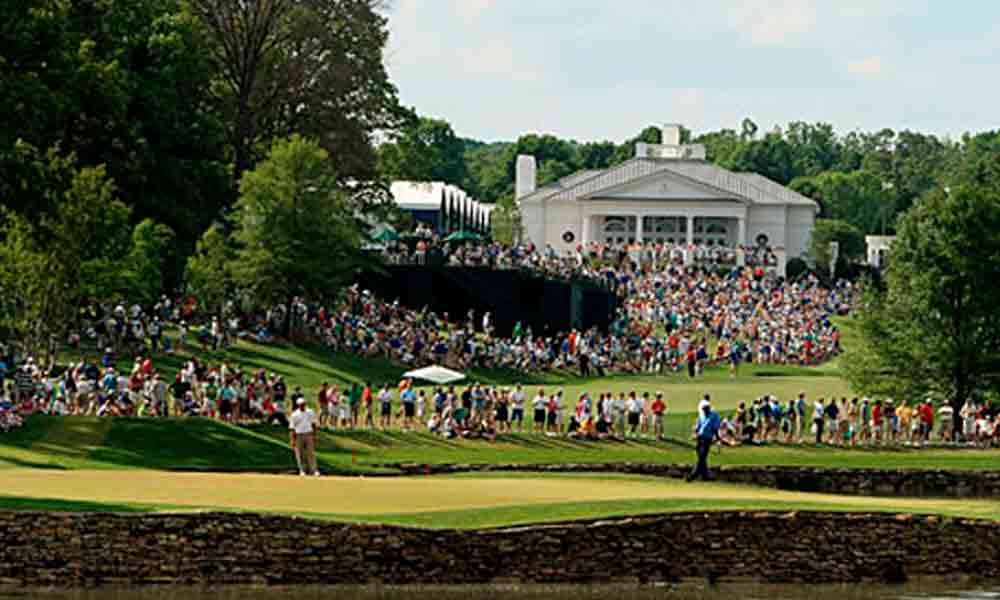 In its pre-tournament coverage of the 2017 PGA Championship this past August, CBS Sports reported that the host course, Quail Hollow Club in Charlotte, North Carolina, had removed “thousands of trees.” In fact, the tree removal was part of a significant and fast-paced course update that commenced immediately after the final round of the 2016 Wells Fargo Championship.

Justifiably, great interest and much discussion followed about the hard work and accomplishments of Superintendent Keith Wood and his crew in preparing the course for the tournament, including the combining of holes, the construction of three new holes, the redesign of the green on No. 11 with the addition of extra bunkering and the increase in total course yardage.

In all, the team at Arborguard, sometimes working directly for Quail Hollow Club and at other times as a subcontractor of Showalter Construction, the general contractor for the course revamping, removed more than five hundred trees in each of the two summers leading up to the 99th PGA Championship. Although Arborguard is in the business of tree removal, taking trees down is not their preference and rarely their first recommendation. The arborists and tree specialists at Arborguard focus on tree preservation to keep trees safe and healthy through pruning, thinning, cabling, bracing, soil therapy, soil decompaction, disease and insect control, pest management and the implementation of lightning protection.

Arborguard: A Natural Solution Right from the Start

When Arborguard President Spence Rosenfeld moved to Atlanta more than three decades ago, he had a vision of building a “different kind of company,” one that could deliver natural solutions to resolve the issues that inevitably arise between people and trees. Today, Arborguard defines its mission, in part, as one of preserving, “harmony, safety and natural beauty while improving our quality of life amid the pressures of urbanization and the turbulent forces of nature.”

Simply put, Arborguard is a tree company founded and operated by people who love trees and are deeply committed to the environment. More than a quarter of a century ago, long before the terms “greenhouse effect “and “global warming” were on the tip of everyone’s politically correct tongue, Rosenfeld was quoted in the Atlanta Business Chronicle as saying, “Wouldn’t it be wonderful if there existed an environmentally friendly device that cooled the atmosphere, cleaned the air of harmful chemicals, and recycled carbon dioxide – a major greenhouse gas – into useable oxygen? Fortunately, for humanity, such a device exists. It’s called a tree.”

In 2009, Barry Gemberling led an Arborguard project to survey over 6,000 trees at the Ballantyne Resort Golf Course in Charlotte. Creating detailed plant and tree-care plans for the trees, Barry and his team followed their tree assessment with a program of insect management, thinning and soil injection therapy. They trimmed the tree canopy to provide for more sunlight for the greens that had been converted from Bent grass to Bermuda grass and meticulously pruned over 200 specimens of crepe myrtles using a method that allows these flowering trees to maintain their shape throughout the year.

More recently, commencing in August of 2016, Barry’s team undertook a similar project in the private community of Moss Creek at Hilton Head Island, South Carolina. Here, amongst the ancient oaks and trailing Spanish moss where two Tom Fazio-designed eighteen-hole courses are located, the arborists embarked on a tree inventory and assessment of some 2,500 trees, roughly forty percent of which were majestic live oaks.

The study was divided into a two-part plan, documenting trees in two geographical areas within the one-thousand-plus-acre residential community. The project involved locating trees by GPS, identifying the species, documenting the height and girth of each tree, evaluating the overall health of the tree and providing a recommended maintenance plan as well as a long-term preservation plan.

Moss Creek residents saw the two-year project as an investment in the value of their real estate, the aesthetics of the community and the continuance of a healthy environment and wildlife habitat. They also recognized a tree canopy’s significant role in reducing topsoil erosion and storm water runoff.

“Superintendents have one of the toughest jobs. They have a huge responsibility to establish and maintain top quality turf. They shouldn’t be expected to manage an arboretum, as well. That’s where we come in. We take their worries away with a sustainable plan that lets them focus on perfect turf grass while we save their trees. We are a preservation company more than we are a removal company.

“At Arborguard, our first intent is always to preserve.”

You can learn more about the services of Arborguard Tree Specialists at www.arborguard.com.

Linda Parker has been writing professionally since the 1980s. With clients in finance, sports, technology, change enablement, resorts and nonprofit global initiatives, Linda helps organizations communicate their stories in meaningful ways to the people they most want to reach. She has authored, ghostwritten or contributed to more than a dozen nonfiction books. Linda is a member of the Authors Guild and the Golf Writers Association of America. You can connect with her on www.linkedin.com/in/lindaparkerglindacreative/

Ernst Conservation Seeds: Sowing the Seeds, Reaping the Harvest
The Renaissance of the World’s Lowest Golf Course (-214 Feet)
To Top