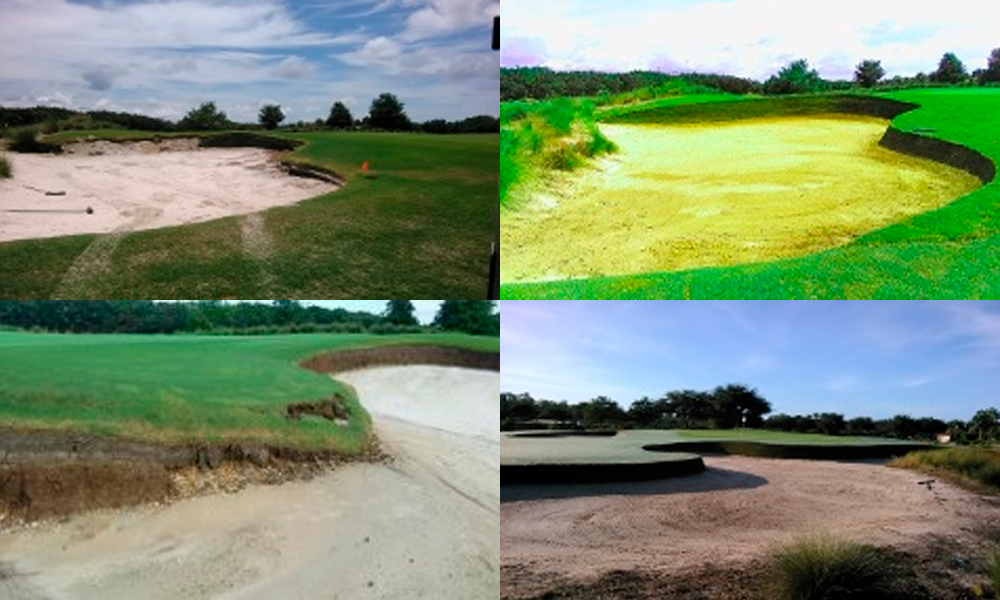 In opting for a first-in-the-region Durabunker installation here at The Club at Nine Bridges, golf course architect David Dale and the PGA Tour’s Steve Wenzloff are looking to transform a reconstruction ritual from every other year to every other decade.

Dale’s design at The Club at Nine Bridges, which opened in 2001 and is now the highest-ranked modern golf course in Asia, is poised to host South Korea’s first U.S. PGA Tour event. The much-feted Scottish Highland-themed layout will host the inaugural CJ Cup Oct. 19-22.

Crews here had been in the habit of rebuilding its 15 revetted bunkers every 2-3 years. According to Dale, pre-tournament renovations will reduce the number of stacked-sod bunkers by a third, but he expects the Durabunker method to increase longevity five-fold.

“We may do better than that, but the climate here is much wetter and more humid than comparable Durabunker projects we investigated — at St. Andrews in Scotland, Royal North Devon in southwestern England, at Tiburon in Florida,” said Dale, a partner with Santa Rosa, Calif.-based Golfplan (www.golfplan.com). “We’ve been impressed everywhere we’ve seen it done, and we did extraordinary due diligence before finalizing this decision.

“The playability over time is exactly what one would expect from stacked-sod, in terms of look and bounce. But the owners here are like owners anywhere: They thought it unnecessarily expensive and disruptive to rebuild with such frequency. Considering this product is built from 100 percent recycled materials, maintains design integrity, prevents sand contamination, and requires no watering, ever — there’s a lot to like.”

Wenzloff, vice president and player liaison with PGA TOUR Design Services, was first introduced to the Durabunker product during a casual round of golf in Florida.

“It seemed like a good design solution; that got my attention,” he said. “Then we got involved with this new project in Colorado” — The TPC Colorado, scheduled to open later this year and the first new-build to use Durabunker — “where they wanted to go the revetted-bunker route. This seemed like the right solution for that environment, too.

“I had made a visit to Nine Bridges back in 2012 when we were analyzing the golf course as a potential President Cup site. Fast forward to the fall of 2016: I was back at Nine Bridges and I could see several of the revetted bunkers had sloughed off. It came to my attention that they rebuilt them every other year and we’re planning to do so again. Do the math: That’s 9-10 times they’ve gone through that process.

“Of course, we’re putting competition in there, so we wanted to ensure they’re viable. We did a test bunker, got buy-in and decided to rebuild them all using Durabunker.”

Dale opted to deploy an in-house crew this winter, in concert with Korean contractor Daejung. All parties are well familiar with the layout: Dale’s original design at opened 16 years ago and despite quickly earning a place in GOLF Magazine’s World Top 100 (it currently sits at #43, the highest of any Asian club built after 1940; Golf Digest ranks it #59 on the planet), Nine Bridges has been the subject of almost continual upgrades and tweaks.

Over the last two 15 years, Dale has authored design refinements here on nearly an annual basis. This winter, with the PGA Tour set to visit, he has refurbished bunkers, re-established the relationship between the pond and putting surface (at the stunning par-3 7th), and added back tees (on the par-5 finisher this has meant an additional 55 yards). But most of the renovations are bunker-related.

“Stacked-sod bunkering has always been a feature here. In terms of terrain,” Dale explained, “the similarities between Nine Bridges and Gleneagles are pretty striking. From the outset, we wanted to accent this unique upland site in the way James Braid would have.

“But they are a maintenance headache (to say nothing of expense) if we’re replacing bunker walls every other year. We also wanted to provide players and television viewers maximum visibility. So, over the course of 15 years really, we’ve reduced the number of stacked-sod bunkers by 75 percent and rebuilt the remainders with Durabunker. We’re also removing several traditional bunkers on the golf course, again, to provide maximum strategic and visual impact.”

Durabunker is poised to make more prominent inroads here in the Asia-Pacific marketplace following January’s agreement with Better Billy Bunker, whereby the latter will now serve as a sales representative for Durabunker, while Durabunker will become a certified licensed installer of the Better Billy Bunker construction method. This stands to further increase deployment of both technologies worldwide, but especially in Asia-Pacific where renovation and new construction markets are strongest.

Co-developed by Managing Director Rhydian Lewis, who is also co-inventor of all granted design patents and registered designs associated with Durabunker, the product is available in multiple bunker styles. Delivery models vary according to license agreements, meaning clubs can build Durabunker in house, or engage full contractual services from the vendor.

Nine Bridges opted for the former to prep for its latest tournament engagement. The Club has played host to numerous Korean PGA and LPGA Tour events. Indeed, it was instrumental in bringing the LPGA to Asia, hosting the first of four events in 2002 (what would become the LPGA KEB HanaBank Championship).

For Korean golf, this fall’s CJ Cup marks a first-ever visit from the U.S. PGA Tour, which has signed a 10-year deal with the owners at Nine Bridges, the CJ Corporation. This new Asian swing will annually bring the world’s most lucrative, star-studded tour from Kuala Lumpur (The CIMB Classic), to Shanghai (The HSBC Championship), to The Club at Nine Bridges.

For all the bunker work now concluding at Nine Bridges, the greens — normally the primary subject of pre-tournament renovations — were not touched.

“We did not re-contour the greens, which is a little unusual in today’s world,” Wenzloff confirmed. “They didn’t need that sort of work. But the putting surfaces here had gotten a bit smaller over time, to the point where some of their various defense mechanisms were too far away. So we recaptured those green areas in the fall of 2016. There was already a great deal of flexibility in terms of hole locations. When we get the speed dialed in where we want it, we’ll really be able to take advantage of some post-recapture hole locations.”