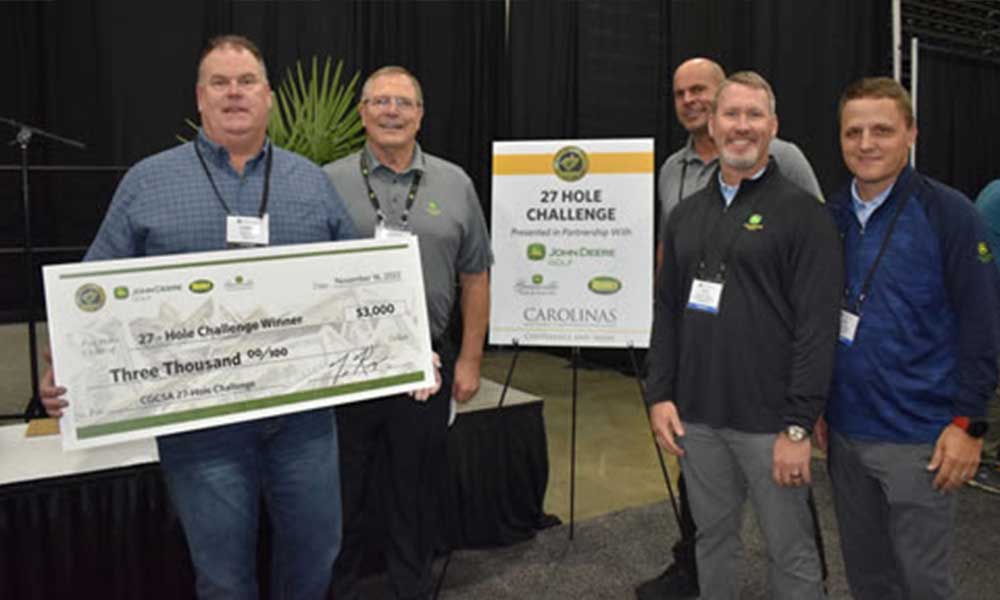 Charles Davis, from Island Greens in Wilmington, NC, celebrates his 15th wedding anniversary in a few weeks and now has three thousand more reasons to take his wife somewhere nice for dinner. Davis was the winner of this year’s 27-Hole Challenge grand prize, which was a check for $3,000.

Davis’ name was drawn at the conclusion of the trade show, along with nearly 20 others, who shared in more than $10,000 in prizes. The ever-popular 27-Hole Challenge is presented in partnership with John Deere Golf, Greenville Turf and Tractor and Revels Turf and Tractor.

Shane Harrelson, from Statesville Country Club in Statesville, NC, was next in line on the prize list taking home a check for $2,000. Kelly Shaw, from Harbour Town Golf Links in Hilton Head, SC, won $500 as the major prize winner in the assistant superintendent drawing.

Davis joined the Carolinas in 2019. The City of Wilmington owns Inland Greens, which is a nine-hole par 3 course that is part of Inland Greens Park. Originally an 18-hole facility, the course was effectively halved with the old front nine becoming a park featuring a walking trail, bocce courts, picnic shelter and a playground.

One of the first people to congratulate Davis on his win was Clatus “Grit” Griddle, Jr., from Hillcrest Golf Course in Orangeburg, SC. Griddle won the grand prize in 2016 and used the proceeds to take his wife on a special vacation.