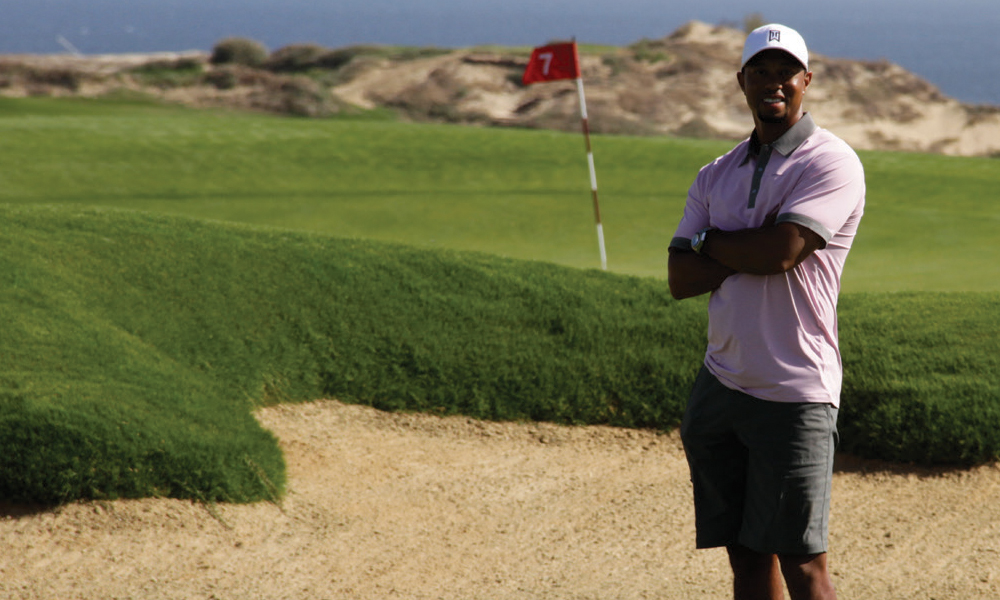 When EA Sports introduced its Tiger Woods PGA Tour game in 1999, golfers and gamers alike snapped up copies by the millions. The chance to play with Tiger–and to play as Tiger–was a temptation few could resist. One of the game’s nice selling features was that it allowed you to play famous courses like St. Andrews and Pebble Beach without braving TSA security lines (or taking out a second mortgage). The one thing the game never offered, though, was the chance to play a real course designed by Tiger. And now that he and EA Sports have parted ways, it probably never will. No, to play a course designed by Tiger Woods himself you will probably have to board a plane–and maybe even cross a border. But the good news is, it will soon be possible.

After false starts on three other course design projects, Tiger’s El Cardonal course at Diamante in Cabo San Lucas, Mexico premiered this fall. And by premiere, I mean actually open for play. At first glance, both the course and its striking Cabo setting should assure success for the venture. But success isn’t something that has come easy to Tiger and his course design company.

His first publicly announced design project was supposed to be a course in Dubai called Al Ruwaya, a project that was introduced with great fanfare in 2006. Woods was reportedly paid over $50 million for designing that course and for agreeing to promote its affiliated golf resort. As part of the arrangement, Dubai developer Tatweer was reportedly also going to pay Woods an additional $14-plus-million to put his name on a second resort. But after only minimal work had taken place on the course, it was scrapped in 2010 and never revived, the victim of a lackluster real estate market in the UAE.

Woods’ second design project has had no better luck. This one, called The Cliffs at High Carolina, is supposed to be part of a gated community in the North Carolina mountains near Asheville. It may still see the light of day, since The Cliffs has seemingly rebounded from financial difficulties that plagued its seven golf course communities in the aftermath of the Great Recession. But for Woods’ course to be built, the developer there needs to sell homes and a lot of them. Problem is, without Tiger’s course to show off (and play), it’s hard to sell those homes. Stay tuned for more on this one.

Also in limbo is Tiger’s third design project at Punta Brava on Mexico’s Baja Peninsula. Announced in 2008 in a grand media conference held at the posh Bel Air Hotel in Beverly Hills, this project seemed to have everything going for it. A deep-pocketed backer–Red McCombs, who made his billions with Clear Channel. An exotic site with multiple holes that play over water. And a mega-star designer eager to see one of his courses brought fully to life. But again, issues arose, in this case problems reportedly pertaining to environmental impact studies and construction permits.

Prior to the Diamante project, the only job that had gone 100% smoothly for Tiger’s design company was the 3-acre practice facility he created behind his home in Jupiter Island, Fla. Sadly, you can’t book a tee time there.

So the recent news that Woods’ El Cardonal course at Diamante was not only going forward but was well on its way to being opened has been warmly received throughout the golf world. El Cardonal will be a private club, open only to club members and guests of the Diamante resort. It’s the second course at Diamante, the first being the Davis Love III-designed Dunes Course there. Designed to play to a par of 71 and capable of stretching to 7,401 yards, El Cardonal isn’t as close to the Pacific as Love’s track–an amazing course in its own right and one ranked in the world top 100. Instead, El Cardonal sits on higher ground, with its broad fairways weaving through the sand dunes and around a series of arroyos, with many holes offering stunning ocean views. The terrain is natural and varied, with tempting forced carries over the arroyos and strategically placed bunkers at every turn. It’s a risk-reward course, which is fitting given the no-holds-barred attitude of its designer.

According to the company, Tiger’s vision at El Cardonal was to create a course that brings back the need for strategy–with several options to navigate each hole. “I set up the golf strategy to make golfers think and make choices,” Woods said. “Regardless of your handicap, there are going to be different ways to play each hole. Angles of approach are going to be very important and will dictate the type of shots you should consider. I love this kind of golf.”

As well he should. The site is reminiscent of the old-California-style courses Tiger grew up playing in the Los Angeles area and those he played while at Stanford. But unlike those public tracks, this tee time will come with a slightly higher price tag.

Meanwhile, in late April it was also announced that Tiger Woods Design had been chosen to design a new 18-hole course near Houston that will be called Bluejack National. The course will be situated on property that was originally the site of another course called Blaketree National. Construction is set to begin this summer with the new private course, set 755 acres of rolling woodlands, scheduled to open by the fall of 2015. Plans also call for Tiger to design a short practice course at Bluejack National.

Will there someday be a video game version of Tiger’s new Bluejack National or El Cardonal courses? Golfers and gamers can only hope.

David DeSmith is a freelance golf writer who lives in New England.