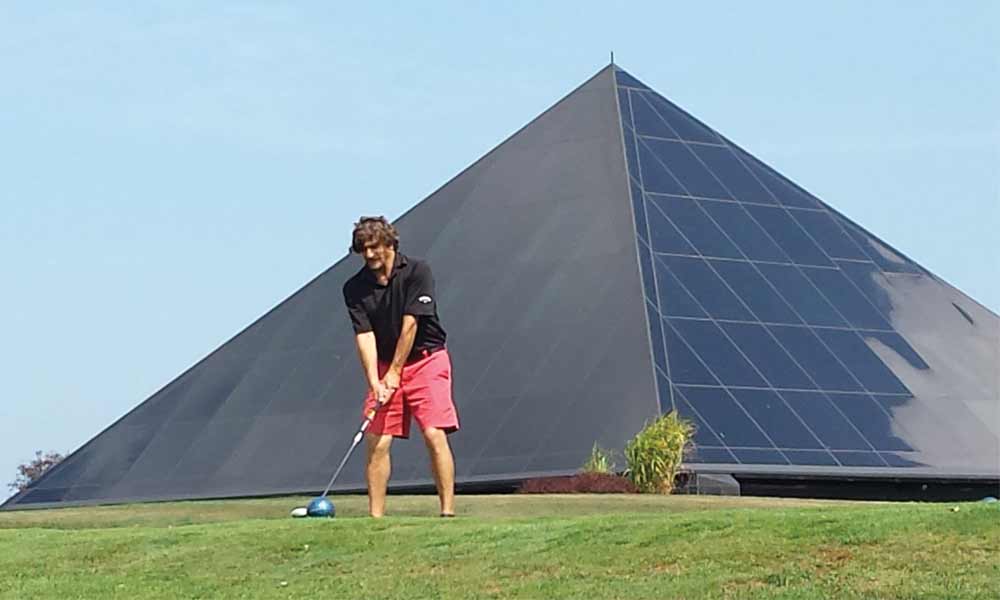 Okay…let me say this out loud, so that I have this right in my head. A guy who never played golf in his life got a bunch of friends and family together, bought some mountainside land near Binghamton, New York and built one of the best and most reasonably priced public golf courses in the mid-Atlantic?

And on top of that, his home is the glass-sided pyramid that overlooks the eighth green and ninth tee box? I’m right about that? That’s your story?

Well, every word of what you just read is true. It’s called Conklin Players Club, located in the town of the same name, so deep in New York State’s southern tier, you can hit a drive and an eight iron into Pennsylvania. And it’s a do-it-yourself, feel-good story that ought to inspire anybody who ever dreamed of designing and building their own golf course.

One night, out of a clear blue sky, Rick Rickard, who had never played a day of golf in his life, came home and announced to his wife Theresa, “Honey, I think I want to build a golf course.”

If most of us said that to our wives, they’d probably shout back something like, “You can’t even mow the lawn right. How are you going to build a golf course?” But Rick and Theresa were landscape designers by trade. Rick’s side of the family also owned an excavating company.

“When my husband Rick puts his mind to something, he does it,” Theresa explained, chuckling. “When he gets an idea, he goes for it.”

So Rick and Theresa bought an old dairy farm, 200 acres of tree-choked mountainside: hurly-burly, topsy-turvy property completely cloaked in hardwoods. They couldn’t have picked a harder topography for first-timers to cut their teeth, but hey – in for a penny, in for a pound.

They roped in friends and family first, the bluest of the blue chip prospects being Rick’s brother in law, also named Rick – Rick Brown to be exact – to help with construction, design, and most importantly, drainage. Rick is now the head superintendent of Conklin.

“I had worked for Rick in high school in his other business – a body shop. (His dad had the excavating company.) It was the late ‘80s and golf was booming. Rick got it in his head that he wanted to build a course, so we started clearing and construction in 1988,” Brown recalled fondly.

It was a three-year build, with hundreds of thousands of cubic yards of earth moved up and down and along the mountainside, but with family and friends chipping in sweat equity and equipment, the work went quickly and efficiently. But while the earthmoving was tough enough, learning the ins and outs of golf design was more formidable.

“We talked to everybody about everything all the time,” Theresa stated in an earlier interview. “We read a lot, and we asked questions of other shapers, builders and superintendents of other golf courses. We also consulted Cornell, which was right up the road.”

Cornell proved invaluable, as did the Rickards willingness to study, listen, and learn before doing anything. That allowed Conklin to not just succeed, but prosper.

They learned how to build greens to USGA spec and that, coupled with their particular talent at drainage – after all, they were landscape designers – allows Conklin to stay open when other courses and private clubs are flooded. Southern Tier rains are legendary for their length and ferocity, and every ten years or so floods out of the Book of Revelations devastate the area. Nearby En-Joie golf club lost their PGA Tour stop because of them just over a decade ago.

Meanwhile, the only standing water at Conklin was in the parking lot.

“Rick and his father were in the construction biz for years; Rick’s father knew how to do drainage, and Rick learned from him,” Brown said. “It’s all about the drainage here. This area is known for biblical floods, but we stay open when everyone else is closed.

“We used the slope of the land to run off the water, we have miles and miles of underground drainage, with French drains in strategic points, and we’ve been regularly adding more every year since we’ve been open. Everything – greens fairways, and bunkers – runs right straight into the irrigation ponds,” he continued.

When it came time to design the actual golf holes, the land dictated a great deal of what they could do, but that’s the best golf course architecture. Some holes spiral up the mountain, clinging perilously to its side like at frequent U.S. Open venue Olympic Club in San Francisco (3, 4, and 5, for example). Others tumble back down the mountainside, cascading like a chicane to greens waiting far below, (6, 9, 17, and 18).

Then there’s the island green at the par-3 10th.

“We had to do that,” Theresa admits puckishly.

It’s just 130 yards: only a 9-iron or wedge, and the target is humungous. The green complex includes flower beds and a bunker, and is 60 yards across at its widest point, so just don’t chili dip one off the tee, and you should be fine.

At its essence, Conklin is a mountain golf course, its fairways carved into the rocky face like green, grassy ski slopes. It’s a murderous walk, but the sunsets are sublime, especially the view atop the par-4 16, aptly called the Volcano Hole because its steep slopes taper to a cone shape and the green lies in the crater. In the fall, with the leaves aflame with crimson and golf, the entire vale explodes with color before you, one of the most enchanting and iconic sights in northeastern golf.

“The toughest challenge here is the weather; you’re at its mercy,” warned Brown. “We do construction, but then things get washed out, so you have to re-do it. There’s also a short and unpredictable growing season. This year was particularly terrible; we’ve had so much rain and snow that mowing has been difficult – a lot of extra hours. Sometimes it takes twice as long to do a job as it used to.”

Conklin is exactly what golf needs more of: shorter, inexpensive public golf courses that you can play quickly, and not get too discouraged losing golf balls or slashing out of rough all day.

“We are a public golf course, so we want people to play in a short amount of time, and have a great time. We keep some holes, like nine, birdieable so people come back,” Brown asserted firmly.

They succeed admirably. Everybody loves Conklin. Pennsylvanians stream across the border in droves, while New Yorkers criss-cross the state any number of different ways to play. It’s on every public golfer’s short list in the region; most of all, because Conklin is fun: whether it’s the island green or the reachable par-5s or the “secret hole,” a.k.a. “7C” which is a hidden hole adjacent to the real seventh, and designed to look and play like 16 at Augusta National.

“We had to do that too,” Theresa joked, laughing at her family’s homage to one of golf’s most iconic and historic holes. It’s hidden in plain site, adjacent to the regular 7th hole, but only friends and family know about it.

Like I said: in for a penny, in for a pound. And regarding the pyramid they built for their house? Chalk one up for the modern designers: Rickards 1, Egyptian Pharaohs 0.

“Everyone asks what it is? Is it storage? One person thought there was an on-course rest room,” laughed Brown. “It would have been the biggest rest room in history.”

Indeed. Fit for an Egyptian pharaoh, but then again, that’s par for this course. Only they didn’t need a hundred thousand laborers. They did it all themselves. It’s more satisfying that way.

When not reporting live from major sports championships or researching golf courses for design, value, and excitement, multiple award-winning sports writer Jay Flemma is an entertainment, Internet, trademark, and banking lawyer from New York. His clients have been nominated for Grammy and Emmy awards, won a Sundance Film Festival Best Director award, performed on stage and screen, and designed pop art for museums and collectors. Twitter @JayGolfUSA