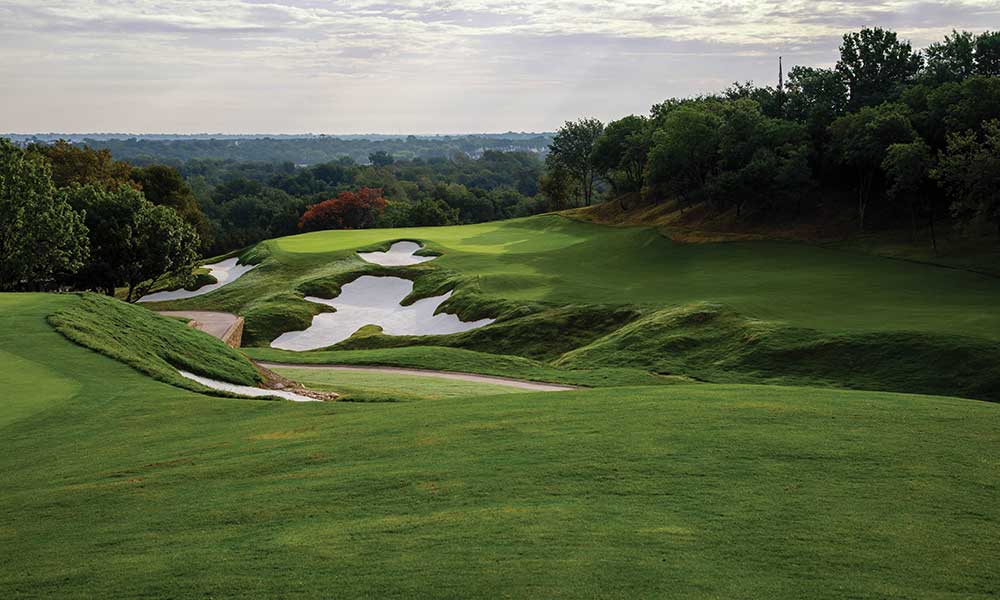 What you just read is not the dialogue of Hollywood’s latest, greatest espionage flick, nor a record executive inquiring about the country’s hottest new pop-punk band. It is, instead, a glimpse at the real-life adventures of Dr. Richard Hurley, the turfgrass world’s proper rejoinder to Steve Jobs.

For 40 years Dr. Hurley has been at the forefront of turfgrass development. He’s named strains of grass after Arnold Palmer and Ben Crenshaw, (that was handsomely done, a fine tribute). He’s installed a putting green at the White House for Bill Clinton. And decade after decade his R&D has resulted in turfgrasses used at not only Augusta National but at thousands of courses around the country.

Now, Dr. Hurley believes he’s arrived at the culmination of his life’s research: 007XL, not just an improvement upon existing turfgrasses, but a zenith, an apex of the craft. We caught up with this sprightly septuagenarian a few months ago discussing Vesper Velvet bentgrass. But it was clear that with the imminent release of such a game changer as 007XL, we needed to bring America’s foremost sod and seed scientist – Dr. Turfgrass himself – for an interview of his own.

JF: How did you first get interested in golf?

RH: That’s easy. My parents lived across the street from a golf course where I grew up in New Jersey.

JF: Which one and where?

JF: How did you first become interested in turfgrass sciences?

RH: I caddied at the club and worked at the driving range picking up balls, and then as I got older my next jobs were working on the golf course maintenance crew. I started caddying when I was just 12, and then graduated up to the grounds crew when I was maybe 16 or 17, and then did that all through my college years.

JF: Did you study the craft of turfgrass maintenance in college?

RH: Definitely! I went to the University of Rhode Island and studied turfgrass sciences under Dr. Richard Skogley. I got both my undergrad degree and my master’s at URI; I started out studying bluegrasses and fescues for sod production. (That was my master’s degree research.) But in the course of that work, I also was introduced to the velvet bentgrasses and creeping bentgrasses: strains that we began to use for putting greens, fairways, and tees.

JF: Then what direction did your career arc take?

RH: Well it was at this point I had a choice. When I was at URI, I had a chance to meet a fellow named Peter Loft. His family owned a seed company, the largest seed company in the world in fact, Loft Pedigreed Seed in Bound Brook, New Jersey. We met in college because he was friends with Dr. Skogley and was working with him on identifying varieties he could sell to not just golf courses and sports fields, but other varieties for home use as well. So when I was finishing my master’s degree I had two job offers. One was to go to work at the seed company, and the other was to become a golf course superintendent at Tavistock golf club in New Jersey. It’s an Alex Findlay design.

JF: One of the great golden age designers…

JF: So where did you move on to after that?

RH: That’s right, but it did! And this time he said if you come to work for me, you can go back to Rutgers to get a Ph.D. in turf breeding. So I did, and I graduated from Rutgers in 1983. And I stayed with Dr. Loft as Executive Vice President of Research until 1999.

JF: Tell us about some of the strains you developed.

RH: So first I developed Kingston Velvet Bent in 1970-73 with Dr. Skogley when I was an undergrad. And it was Peter Loft who decided to produce, market, and distribute that variety. The name of Kingston was obvious because we were in the town of Kingston in South County, Rhode Island. Next came Palmer Perrenial ryegrass in 1983. I named it after Arnie, and they used it at Augusta National, home of the Masters, for the winter overseeding of fairways and tees from 1983 to the end of the century. Around that same time – 1985 – I developed Rebel tall turf type fescue, which is used by sod growers and homeowners and became the most popular tall fescue ever. It’s still used today.

Then came L93 creeping bentgrass in 1993, one of the most popular strains of the last quarter-century.

JF: What were the improvements made between the Palmer and the L93?

RH: L93 is a creeping bent. It had a finer leaf texture with the ability to mow it lower, and it would still provide a denser turf, which results in a more consistent playing surface.

JF: So what came next?

RH: Next came 007, (called that because we released it in 2007), and that’s used all across the world: over 2,000 courses across America and Europe and over 600 in Japan, including Olympic Club for the 2012 Open won by Webb Simpson, the greens at Wentworth in England for the BMW Championship, Kasumasaki Golf Club in Tokyo, Japan for the Olympics this summer.

And then ten years later, in 2017 we released 777, (pronounced “Triple 7”). That’s being used this summer at Ben Hogan’s old home, Shady Oaks, in the shadow of Colonial Country Club in Ft. Worth, Texas. It’s also at the Country Club of Virginia for their Champions Tour event. And a seed blend of 007 and 777 was used by Gil hanse in his recent restoration of Donald Ross’s masterpiece Oakland Hills South Course.

JF: What were the respective improvements of 007 and 777?

RH: These 4th generation varieties, among others like Tyee and SR1119, represent the “advanced generation” of bentgrasses – varieties shown to be a convincing improvement over the first three generations. 007 alone became the standard in the 2000s for use in cool-season climates. It’s extremely versatile for seeding greens, tees, and fairways. Then ten years later, 777 featured quick establishment from seed (normally three to seven days) and exceptional heat tolerance. It does well all the way south to central Georgia, mid-Texas, and even Scottsdale Arizona.

JF: Speaking of SR1119, you used a blend of that at Bayonne Golf Club, didn’t you?

RH: Yes, we used a blend of SR1119 creeping bent and SR7200 Velvet. We selected those because we wanted an old-time fescue look because it’s a links course.

I have to say, Bayonne was the most remarkable experience of my life, in particular working with Eric Bergstol. It was surreal – the outcome…the result of his work at that course is a masterpiece.

JF: And what he had to go through to get it built…

RH: No other architect could have survived the agony that he had to go through to get that course built. Nobody else could have gotten through all that permitting.

My wife Nancy was responsible for 007. We were going to name it just 07, but she said to add another zero. Plus for 777, well seven is a lucky number.

JF: An awful lot goes on behind the scenes in the ten years between releasing strains. Lift the curtain for us, if you will, on what goes on in these in-between stages.

RH: Each advancement is the result of over a decade of intensive plant selection, advanced turf evaluations, and selective breeding.

RH: A “super bent” called 007XL. That’s coming out right now, and that’s the culmination of 40 years of work, a bent grass for tees, greens, and fairways. I think it’s my best effort, a beautiful grass: disease resistant, totally pure in its qualities. For someone like me, at 74 years old, I think this is it. We call is 007XL because it EXCELS!

JF: What’s the difference between a bent and a superbent?

RH: The superbent class of varieties, the highest advancement we’ve reached yet regarding disease resistance, leaf texture, and height of cut. 007XL is not simply an improvement on 007. 007XL is a totally unique and distinct variety that is the result of over a decade of intensive plant selection, advanced turf evaluations, and selective breeding we were discussing earlier. Over the course of many decades of research, what we now have, through the efforts of genetically enhanced breeding, is a total transformation of random creeping bentgrasses – wild strains – into highly refined varieties. A high priority within the Rutgers University breeding program has been to develop bentgrass varieties that offer greater genetic resistance to fungal diseases, including dollar spot, brown patch, anthracnose, and snow mold. With each cycle of bentgrass breeding, the overall performance values for selected varieties have been significantly improved — finer left, denser turf, greater disease resistance/less fungicide use — all while producing a more resilient and attractive turf.

JF: Do you consider 007XL your magnum opus?

RH: Yes. It can tolerate a very close height for tournament golf. It’s amazing the height of cut in today’s tournaments; supers cut greens to .105 of an inch. So this grass can tolerate that low cut plus its uniform fine texture and consistent disease resistance are everything you want in quality bentgrass for tournament conditions. Additional qualities expected from 007XL include an attractive pleasing leaf color, no purpling of the leaves during the cooler months of the year, will not produce a “puffy/thatchy” turf, all while exhibiting exceptional disease resistance that will allow for lower fungicide use.

007XL will, quite simply, set a new standard for excellence.