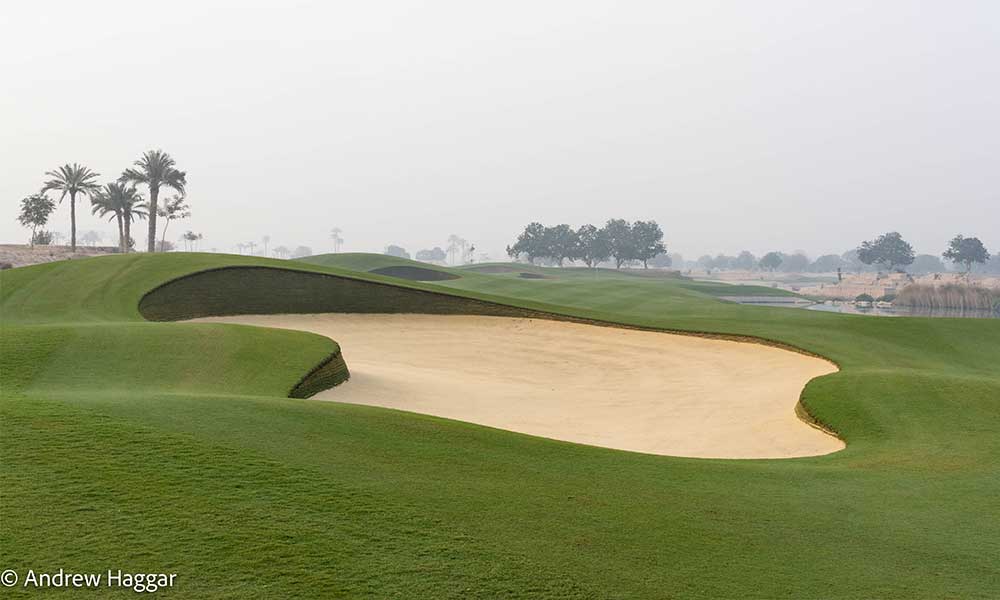 The new Rumanza course in Multan, Pakistan, is using the EcoBunker engineered bunker edging system as a key part of its design.

The course, which is part of a 9,000-acre community being developed by DHA Multan, an agency of the Pakistani Ministry of Defence, was designed by six-time Major winner Sir Nick Faldo’s firm. Chief architect Andy Haggar explains: “The Rumanza site is extremely flat, and so we were obviously looking for ways to create movement and drama in the golf course. There are a lot of mango and citrus trees there, but outside those orchard areas, the site was just cereal crops and bare earth. That led us to select a links-style theme for the course, and that, in turn, led us to think about using EcoBunker. But the difference is that, on most links, the bunkers are relatively small, and that is definitely not the case at Rumanza. We do have some small bunkers, but most are fairly large, with big walls. There are also desert-style waste bunkers, where we have used the EcoBunker Advanced system to define the edge in key places. The course uses warm-season grass – paspalum – and so using natural turf to create the bunker walls would have been very difficult. The EcoBunker Advanced system was the answer: we’re always looking for new ways to be creative in our designs, and on a site like this, we had to go large, because anything small would just get lost.”

Haggar says that Sir Nick was very keen on the EcoBunker product. “Nick has known about EcoBunker for some time, but I’m not sure he had ever seen it in the flesh before, and he absolutely loved it. I could see his mind whirring and thinking about how we could use it – on this and other projects. It is the flowing shapes that you can create that he really likes – he calls it ‘land art’. We have a lot of that at Rumanza. I have to give credit to construction manager David Matthews – the shapes in the bunkers are fabulous.”

EcoBunker inventor and CEO Richard Allen says: “Rumanza is a fantastic showpiece that demonstrates not only natural stunning aesthetics and low maintenance qualities; it also highlights the importance of robust engineering. The high, steep walls underlain by deep in-situ sand present a technical challenge, and the EcoBunker Advanced system which we independently developed in 2016 was the perfect solution. My team and I have been actively involved, contributing to the early on-site design team workshops, followed by the training project from Llewellyn Matthews and ongoing technical support throughout. It is so exciting to see how the course has turned out.’’

Civil engineer Richard Allen invented the concept of synthetic bunker edges back in 2009 and founded EcoBunker Ltd. in 2014. Since then, the EcoBunker method has been used to build bunkers on around 400 courses in 34 countries.

Allen later modified his original construction method (which was patented in 2013) to create the EcoBunker Advanced system, introduced in 2016. EcoBunker Advanced uses a cement-modified backfill to create extra stiffness and stability, creating stronger revetted walls. EcoBunker welcomes inquiries concerning its system, which is patent-pending and invites anyone interested in it to make contact via ecobunker.co.uk.