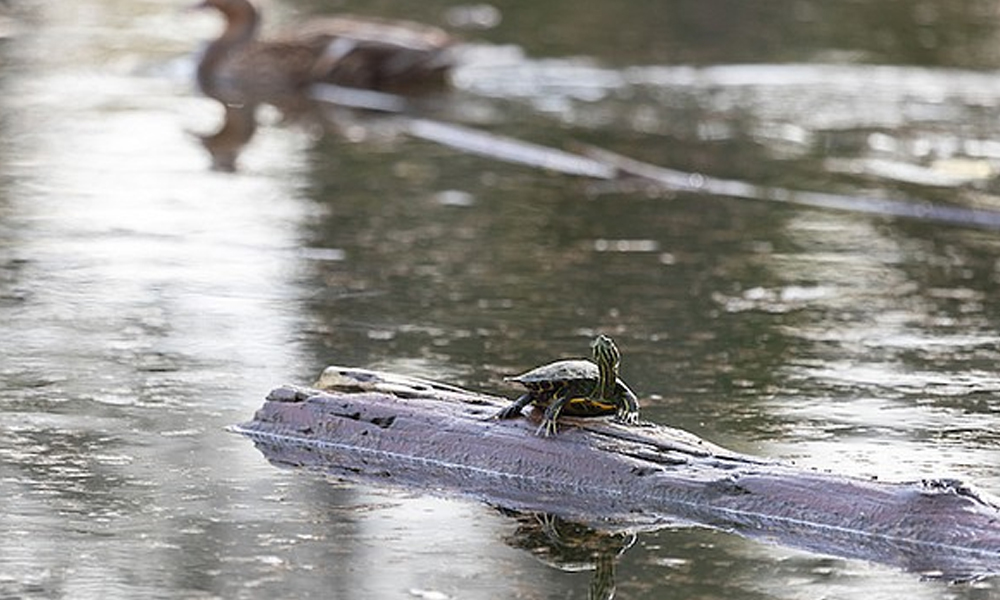 It’s been over half a century since comedian Jack Benny cut the ribbon signaling the opening of Emerald Isle Golf Course in southeast Oceanside. Since then the course has doubled its original hole count from nine to 18. Over the years improvements were added, but eventually the 56-par, 2,703-yard course fell into disrepair.

That all began to change in 2014 when it was purchased by pro golfers Holly and John Kennedy. According to Holly, “The course was being run by an absentee owner and had been neglected to the point that it was barely hanging on when we took it over.” Now well manicured and attractive, a Wind in the Willows tranquility is present on the greens and, especially in the four ponds.

While owls, hawks, herons, egrets, coyotes, and bullfrogs share the waters and adjacent land, the turtles are the stars of the show. These are mostly painted pond turtles, and native to North America, but there may be other varieties sharing the water. According to Holly, ”Occasionally someone will stop by with a turtle they have found and ask if they can place it in one of the ponds. We always say yes, so it’s become a hodgepodge out there.”

Painted turtles spend much of the winter months underwater in hibernation, and only return to view in March. from then through fall, most afternoons will find admirers, drivers in hand, pausing along the fairway, staring into the dark waters, where up to a dozen of the chelonian reptiles can be observed, basking in the sunlight.

Some speculate the arrival of turtles to these ponds was a recent occurrence after someone abandoned an aquarium pet or two. Others, however, believe they were swimming there long before a golfer scored the first birdie. If so, the pond would require a year-round water source. According to Holly, “Three of the ponds dry up each summer, but the northern one does not. Because of that some of us believe its own spring is feeding it.”

Many golf courses are considered detrimental to wildlife, but that it is not the case here. According to Holly, “We have set up bluebird boxes throughout the course, and we work closely with the Nature Conservancy and the Audubon Society to ensure that the grounds and the ponds are environmentally healthy. Our superintendent, Chuck Rieder is an animal lover and concerned with every little bird, frog, and turtle on the property He rescues everything from mice to hummingbirds and owls. He is just as passionate about our wildlife as he is about the golf course.”