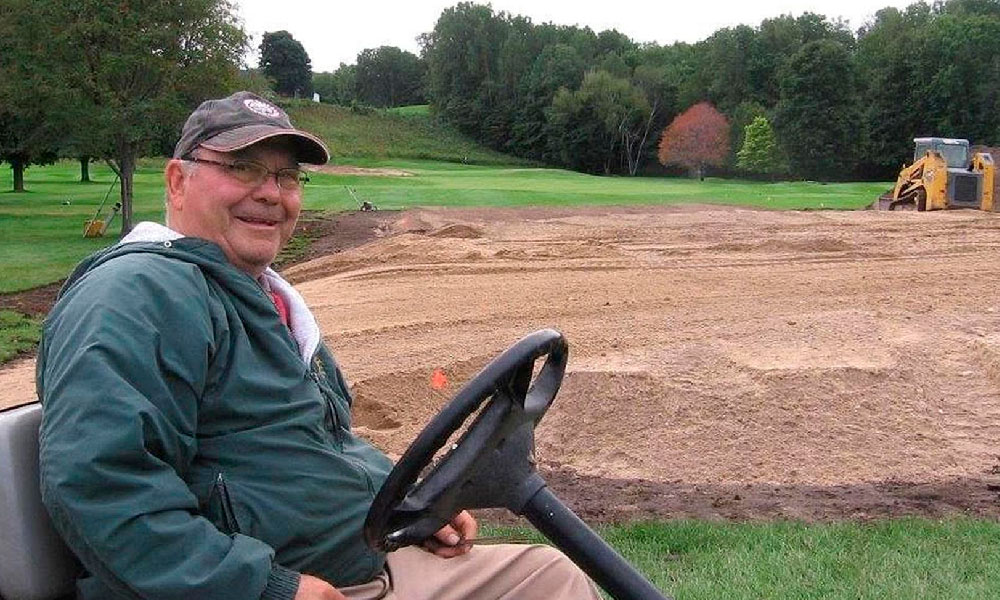 He’s been a fixture at Belvedere Golf Club for over a quarter of a century.

For Rick Grunch, superintendent at the historic Charlevoix golf course for the past 26 years, it was just simply time to step away.

“Belvedere has been my life for more than a quarter-century, but my body is telling me it’s time,” the 72-year-old Grunch said. “The members have been family to me over these years and I have had the privilege of working with an amazingly talented and dedicated staff.

“It has truly been an honor to be the caretaker of one of the game’s national historic treasurers,” Grunch added. “There have only been three superintendents there (at Belvedere) and I’m the third one, that says a lot for the membership.”

Grunch, who will officially retire on March 1, 2020, said he still enjoys working and staying busy.

“I’m a working superintendent,” Grunch said earlier this week from Baraga County, where he was bear hunting. “I do all the fertilizing, spraying and when we did our renaissance I did a lot of the shoveling, raking, and running the tractors.

Years and years of demanding physical labor have taken a toll on Grunch’s body, as he’s undergone two knee implants and more recently a hip replacement.

“The one knee I’ve had two revisions on so it’s like I’ve had four knee surgeries,” Grunch said. “I couldn’t bend my leg for about 10 years. I finally found someone who could fix it with a new technique which got me back to about 80 degrees. I only had about 15 degrees for 10 years. I just hobbled along.”

Grunch said he’ll at some time most likely need to have surgery performed on his knuckles and his back.
“I don’t let it define me,” Grunch said. “I just keep moving and working. You could sit around and feel sorry for yourself, but I don’t do that.”

Grunch said looking ahead at his 73rd birthday there are things he still wants to do.

“I could keep working, I love the golf course, but you look at the ruler and it’s getting harder to do those things I want to do,” Grunch said. “I have some grandkids out west and I have hunting dogs.”

During his career at Belvedere, Grunch has overseen a number of projects that have helped maintain the rich classic design architect William Watson created in 1925 when the course opened.

The largest of those projects unfolded in 2016, when the original William Watson golf course plans were discovered during the renovation of an old building in Charlevoix.

Together with his grounds crew and architect Bruce Hepner, Grunch oversaw the restoration of the course, which brought much of it back to the original Watson design.

“The restoration was a labor of love for me,” Grunch said during the summer of the restoration project. “To return the course to what Watson originally envisioned was a special gift. The Belvedere is my life.”
The restoration resulted in Belvedere Golf Club being listed for the first time ever among Golf Digest’s biennial list of “America’s 100 Greatest Public Courses.”

Belvedere was also selected as the site of the 2019 United States Hickory Open, which took place this past June.

In August of 2017, Grunch received a special recognition citation from the golf club for his work on the restoration project. Living in the farmhouse along the No. 7 fairway, Grunch has been a longtime fixture and part of the fabric of the historic course.

“He’s very dedicated to his craft,” said Marty Joy, head golf professional at Belvedere. “When you actually live on the golf course and stay right here — he has the only house on the course — he’s here 24/7 for seven months a year. And he’s been doing that for 26 years.”

Grunch’s knowledge of the course, studying plans and aerial images from 1938 and construction work, was vital to the success of the renovation project.

The project included building new bunkers, reshaping contours to tie in with existing ground conditions and flow of the land, as well as re-establishing all the expanded areas around the green complexes.

“That with a smaller budget and having only 6-7 employees which include a mechanic,” Grunch said. “Doing all the construction and irrigation in-house, it’s a lot of hours sometimes in trying times for me, but I’ve tried to relax a little more.

“Being on the golf course is relaxing.”

Grunch, a 1969 graduate from Michigan State University, has built several golf courses in his career including Dunmaglas in Charlevoix as well as worked on The Floating Green at Coeur d’Alene in Idaho, where he once resided.

“I built another course in Ludington right when I got out of school,” Grunch said.

David Gray, general manager of the Belvedere Club and Belvedere Golf Club, lauded Grunch’s service over the past 26 years.

“Rick was totally dedicated to the course, the club, and making Belvedere one of the prime courses in Northern Michigan,” Gray said. “We wish him the very best in his retirement.

“His dedication and the long hours of work he put in on a regular basis have been greatly appreciated by all.”
Joy noted being just the third superintendent in the course’s nearly 95-year history is in itself amazing.
“For most golf courses that’s unheard of,” Joy said. “He’s a diehard bear hunter and fisherman and he does that in the off-season, but he maintains this course for about six months and then does a lot of maintenance in the wintertime, taking down trees, keeping things plowed out and maintained.”

There’s added pressure of having the golf in tip-top shape for members who come from across the country, many of whom are also members of other nationally renowned courses, Joy said.

“He’s expected to have the course ready and rolling when those members come back into town and start their vacation,” Joy said. “There’s pressure to have it ready and have it in top-notch shape after a hard winter of a terrible spring like the one we had.

“We didn’t even open up for Memorial Day weekend this year because the spring was so bad,” Joy said. “A lot of members know what good golf is supposed to be and they expect it here too.”

Grunch’s replacement will be Toronto, Ontario native and Michigan State University graduate Jordan Caplan, who served as superintendent of the St. Martins Athletic Fields at the Philadelphia Cricket Club.
“He comes in with a lot of experience and he’ll be only the fourth guy in about 100 years of this course,” Joy said. “If you go to other courses around the area, many have had about 10-12 guys in that same time span.

“He (Caplan) got married at Castle Farms and his wife is from Manton,” Joy added. “He has an idea of what is expected and what he’s getting into. Hopefully he’ll be here a long time.

Grunch plans to remain in Charlevoix with his wife, Nancy. The couple have four children, Christine, Mary Jane, Liz and Keith, along with seven grandchildren.

“My wife loves town (Charlevoix) and the golf course,” Grunch said. “I want her to be happy.”

He also has established a consulting service for the golf course industry which will occupy much of his time along with bear hunting with his dogs.