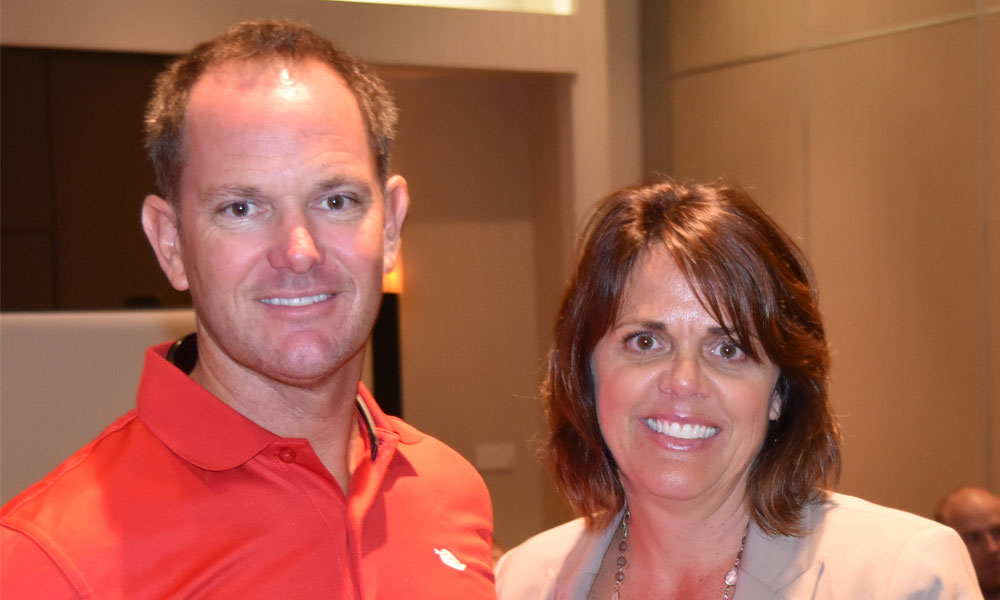 The Florida GCSA board of directors has recognized executive director Jennifer Bryan for 10 years of exceptional service to the association. The directors made a presentation to Bryan at a recent board meeting to acknowledge not just the milestone but also the caliber of her work. 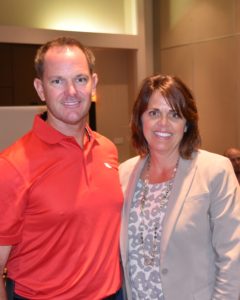 Florida GCSA’s immediate past-president David Dore-Smith with executive director Jennifer Bryan after a presentation to mark her 10th anniversary with the association.

“It’s quite staggering what she has achieved,” says immediate past-president David Dore-Smith from Copper Leaf Golf Club in Bonita Springs. “She is the pivot around which the whole chapter revolves and she has very quietly and very creatively pulled us all together as a state association. We are no longer 11 disparate local chapters just doing our own thing. It’s a much more collaborative effort now that benefits everyone.”

Dore-Smith says Bryan’s administrative and leadership skills are apparent at board meetings, in the performance of committees and in the improved health of the association finances. “Everyone looks to Jennifer to make sure everything is running as it should be, that everyone is fulfilling their role,” he says. “We’ve come a long way in recent years but we would not be near as well off if not for Jennifer.”

Current president Ricky Reeves from Miami Beach Golf Club in Miami Beach concurs with Dore-Smith’s impressions. “Jennifer has certainly laid the groundwork for our officers and directors to be much more effective in moving things forward,” he says. “Because she does such a good job of maintaining our records and keeping everything on track, we, as directors, can devote more time and energy onto what’s next for the association.”

Kevin Sunderman from Isla Del Sol Yacht and Country Club in St. Petersburg was on the board for much of Bryan’s time with the association. He was president in 2013-14. He says Bryan began making a strong impression from the time she was hired “for what was largely a clerical role” as association manager. She became executive director in August of 2014.

“It was such a logical choice to promote Jennifer at that point,” Sunderman says. “Because she had already done so much and was so familiar with duties beyond her job description. Whatever it was that needed doing she made sure it was taken care of without having to be asked. That’s dedication.”

Sunderman credits Bryan with freeing the board to transform the Florida GCSA into a “more responsive, more proactive association.” “She has been instrumental in the evolution of the state association as we know it,” he says. “None of what we have been able to achieve in recent years would have been possible without Jennifer. She is always full of great ideas. She’s extremely intelligent, diligent, just as loyal and always very even and calm in her demeanor.”

In a report this year’s winter issue of The Florida Green Sunderman summed up where the association was at the time of Bryan’s promotion. “We needed to shift the focus away from the status quo. We had to re-brand ourselves as an association and give members a better idea of the value and services we could offer. We had to shift the culture and provide more benefit, otherwise, why be in business. Jennifer has been instrumental in turning things around.”

Reeves, Sunderman and Dore-Smith all make the point that they are continually impressed by the fact that Bryan has achieved what she has as a “one-person office.” “I’m always amazed by what she accomplishes as a single staff member,” Reeves says. Dore-Smith points out that Bryan also runs the annual Florida GCSA reception at the Golf Industry Show which can have as many as 1,000 attendees. “It can be a huge undertaking but she gets it done, all on her own,” he says.

Dore-Smith says Bryan’s efforts to travel the state and present a face for the state association at local chapter events has promoted “a greater sense of unity.” “With that work and the changes we’ve made to some of our Florida GCSA events and with the website and the magazine, and so on, I think there’s more of a feeling of connection. More people are getting to know more people from other parts of the state and that’s a great thing.”

Sunderman says Bryan has steered the association’s adoption of new technologies for database management and communications. “She’s really brought us into the 21st century,” he says. “Her contribution has been huge. I sincerely hope she is with us for another 10 years and then some.”