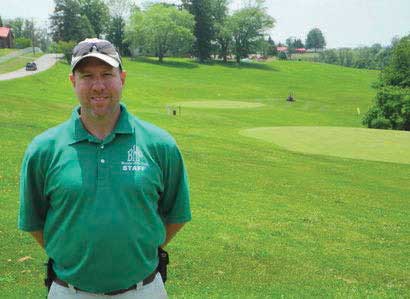 Recent visitors to the Brooke Hills Park golf course have likely noticed some changes, and there are still more to come, according to Brad McCombs, who has joined the park’s staff as superintendent of the golf course.

It’s the first time, at least in many recent years, a staff member has been dedicated solely to the course, said Janice McFadden, the park’s manager.

“This is a first for us and definitely a plus. He’s making some improvements that are definitely noticeable and we’re getting a lot of positive comments,” she said.

ADDITION – As the new superintendent of Brooke Hills Park’s new golf course, Brad McCombs has been working with the park’s board and staff to upgrade it. — Warren Scott

McCombs credited McFadden and the Brooke County Park and Recreation Commission, which oversees the park, for the supporting changes.

He said in addition to reconstructing the driving range tee, “We’ve been doing a lot of landscaping – mulching and planting flowers.”

McCombs said he and the park’s staff also have installed irrigation to the fairways so they can be watered on dry days, and are cutting the grass lower than in the past to improve the speed of the greens.

There also are plans to pave cart paths on the course in July.

“They (the park board’s members and McFadden) wanted to turn the golf course around, and I was excited about that,” McCombs said.

A Follansbee native and 1996 Brooke High School graduate, he said he grew up playing on the course and is very pleased to be overseeing a golf course close to his home in Wellsburg.

After earning a degree in turf management from Rutgers University, he worked in grounds maintenance at Indian Run Golf Course in Avella and as assistant superintendent at the Club at Nevillewood near Pittsburgh and the Pittsburgh Field Club, two top area clubs that have hosted major tournaments.

He was superintendent during the last eight years at Blackmoor Golf Course in Richmond.

McCombs said the 18-hole, par-3 course at Brooke Hills, while lesser known, is fun and challenging and offers a scenic view.

“The layout of this place is phenomenal,” he said.

McFadden said the course has been a good source of revenue, even in the park’s leaner days. She noted the course is the park’s most used facility, open from spring to fall.

Opening at 8 a.m. Monday through Sunday, it usually sees golfers in the summer from then until 9 p.m. when it closes.

McFadden and McCombs said it attracts a broad range of ages, from those who come for a relaxing game after work to retirees who often turn out early to families who golf together on weekends and at other times.

A women’s golf league meets there on Thursdays, but there are no men’s leagues, McFadden said, adding other organized leagues are welcome.

In addition to holiday specials, the course offers half-price specials each Tuesday and Thursday.

McFadden said McCombs is indirectly responsible for a new activity at the park – pickle ball. She said McComb’s father echoed a request for the game made for some time by a member of her family.

Popular in the south, the game is a cross between pingpong and tennis but involves a whiffle ball.

McFadden said those who want to learn more about the game can visit the park’s basketball courts at 6 p.m. Sunday.