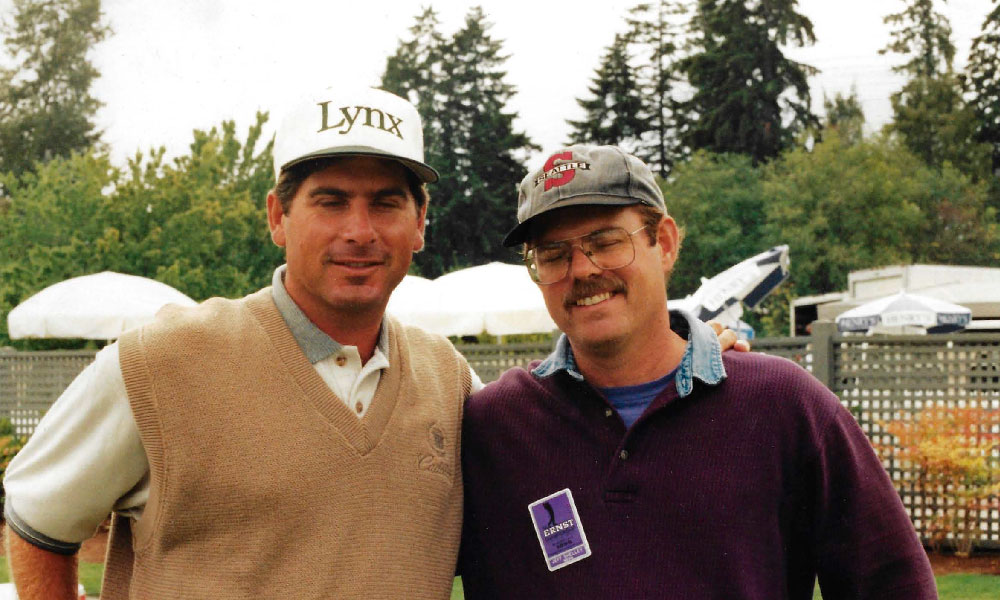 I’m not alone in trying to emulate Fred Couples’ smooth take-off and delivery when hitting a golf ball. As a golfer from Seattle, I, along with thousands of fellow citizens, realize – like Fred – that a golf glove is pretty useless in this rainy place. Those who need a glove to grip a golf club during the many drenched times of the year here might as well pack eight of them for a single 18-hole round. So, most of us Jet City hackers, just like Freddie, are glove-less in Seattle.

My abiding affection and respect for Couples is probably deeper than most. While interviewing Fred’s best friend, John Bracken, for a magazine article that heralded Couples’ first-ever eponymous tournament in 1994, I made a contact that led me to become the event’s media director the following year. That relationship continued until the demise of the two-day Fred Couples Invitational in 1999.

(Alas, the reason the event ended was because of increasing difficulty getting PGA Tour pros to come to the event – regardless of their fondness for Couples. Even though winning the event could secure a payday of $150,000 or so, being guaranteed $15,000 – the amount “losers” took home – wasn’t enough to attract a decent field in the late ‘90s. The players believed their time would be better spent practicing during this Monday-Tuesday affair in August, in the hopes of securing a much bigger check in a regular PGA tournament, which by then began routinely offering multimillion-dollar purses.)

During the Invitational’s brief but exciting run, we enjoyed wonderful fields. One year I had no problem boasting to my fellow media that eight of the 12 members of the previous year’s winning U.S. Ryder Cup team would be in attendance. Steve Ellington flew into Seattle on the Monday following his thrilling playoff win over Colin Montgomerie in the 1995 PGA Championship at Riviera. Ellington was so pumped up (or more likely, partied too hard) that he didn’t sleep a wink the night before. That very same year a youthful Ernie Els entered our modest media tent for interviews and immediately removed his shoes, revealing some very big, achy feet.

One year, Brad Faxon and the event’s first-ever winner, Billy Andrade – those devilish New Englanders – hit on my stunning blonde daughter Erica, then 16, on the practice green. Erica was particularly smitten with the handsome Andrade.

Because I worked my rear end off during the tournament proper (the media-credential requests went from about 20 in 1994 to nearly 200 the final year), I had little time to schmooze with the players. The Fred Couples Invitational was also one of the first tournaments covered by a new broadcast entity, The Golf Channel.

But I did get to see the touring pros up close and personal. Almost to a man (Daly and Fuzzy Zoeller – drinking buddies then – being glaring exceptions), I found them generous with their time and laudatory of the host. Mickelson in particular struck me as a gentleman. One year as one of the players spent a bit too much time on the podium answering questions, I found “Lefty,” the first-round co-leader of the tournament, patiently standing alone outside the interview room. I asked if he needed something to drink or wanted to retire to the locker room for a few minutes. He said no, he was fine, and didn’t mind waiting.

My favorite time during the tournament was a two-hole shootout, which began the proceedings on Monday at 8:00 a.m. sharp. The shootout was played by Freddie and the highest-profile golfers of that year, along with local celebrities. The latter group included Seattle native and sax player Kenny G, then-Seahawks coach Dennis Erickson, and former Supersonic Detlef Schrempf, who was so nervous on the first tee that he nearly beaned several spectators.

For the shootout, we jimmied up a golf cart with loudspeakers and hooked up microphones– most years – to Gary McCord and David Feherty. The fans would follow the eightsome of golfers up and down two holes, with McCord and Feherty blasting the players with their piercing wit and sacrilegious zeal.

The two cracked up the crowd as the players strolled up the fairways at the three courses we used over the years as the host site of Boom-Boom’s tournament – Overlake G&CC in Medina, Inglewood GC in Kenmore, and Newcastle near Issaquah. Freddie and the pros knew this was a departure from the usual pro-am protocol, and McCord and Feherty made sure the proceedings were raucous.

To the surprise of everyone, especially himself, Feherty shared the first-round lead with Scott McCarron one year. After a sparkling 66, the Irishman (now a teetotaler) quipped, “I trained for this with six beers and going to bed at 2 a.m.” Apparently inspired by the chance to win what would be his biggest-ever paycheck for winning a golf tournament, $160,000, Feherty got a good night’s sleep and hadn’t a drop to drink the night before the final round. Thus cleansed, he shot a 77 and finished way back in the pack. Never one to miss the chance to deliver a moral to a story, Feherty said afterward he should’ve stayed out and partied all night long, adding, “I’m glad this was only two days. I don’t think I could have handled an 88.”

I always made sure to grab Erica and my wife Anni from the grips of the interview room and put them and myself in the middle of the shootout action. We greatly enjoyed walking beside our luminaries, reveling in the fellowship and comedic camaraderie of the moment. Save for their abilities to hit a small dimpled ball, Fred, Phil, Arnold, Laura, Davis, et al, were just like the rest of us. You could sense they were golfers who loved the game and had fun with it, and didn’t mind the scathing commentary of Mssrs. McCord and Feherty.

The tournament was a big success, with over a half a million dollars raised for local charities during its too-short run. One of the prime beneficiaries was Breast Cancer Research at the Fred Hutchinson Cancer Research Center in Seattle. Couples had lost his mother to breast cancer, and his wife at the time, Thais, also survived the disease.

One could do worse than to emulate a guy as suave, smooth and sensitive as Fred Couples. And who needs a golf glove anyway?