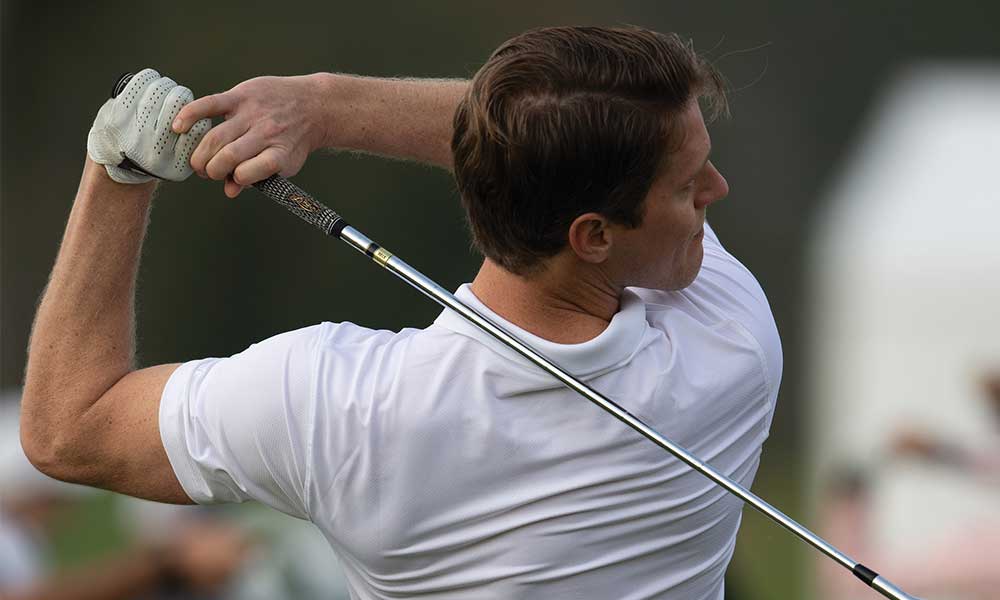 To rise from an entry-level apprentice program to senior vice president in just eight years is an achievement in any type of business. ARDA thought so too, and at their June industry conference in Orlando, the judging panel named Aaron Stewart the recipient of their prestigious Circle of Excellence (ACE) Emerging Leader Award.

His growth from rookie to senior leader and national award winner is quite a story. For a bit of background, Aaron is the son of the late PGA Tour icon and World Golf Hall of Famer Payne Stewart, who won 11 PGA Tour events, including three major championships. Aaron spent his summers on the road as a PGA Tour Kid and grew up on tournament golf. It’s not surprising that he would want to follow in his father’s footsteps by playing golf at Southern Methodist University, where Aaron was Team Captain for the men’s golf program and earned a sports management degree. He worked as a Tournament Coordinator at the Tavistock Cup immediately out of college and joined the Diamond Resorts team a few months later. Today, Aaron and wife Naiara are the proud parents of Banks Aaron Stewart, born on January 29, 2021.

For several years, Diamond Resorts CEO Mike Flaskey had played golf with Aaron at an Orlando course, so he knew the young man personally and envisioned him as the ideal addition to the company. In 2012, Flaskey convinced Aaron (then 23 years old) to participate in the inaugural Diamond Resorts inaugural Marketing Mentorship Program – a rigorous nine-month apprenticeship program designed to prepare young professionals for marketing leadership positions. While in the trainee program, Aaron suggested the same staff person introduced at pre-arrival should remain with the customer throughout the entire check-in process. Diamond utilized his idea by creating the VIP member check-in program – an idea that was so successful, the program has been implemented company-wide.

After completing the program in April 2013, Aaron was elevated to Off Property Contact Program Manager (OPC) in Orlando with over 400 employees reporting to him. This was a huge responsibility for someone under 30, but Aaron’s extraordinary organizational and people skills made him ideal for this role. With the boundless energy of youth, he worked tirelessly to locate the best high-traffic locations in Las Vegas, Arizona, Tennessee, Florida, and Virginia Beach.

In reflecting on this position, Aaron added, “This work truly taught me the grassroots of lead generation and the important role it plays in the entire timeshare selling process.”

Aaron’s next step up the corporate ladder was his promotion to Director of Marketing at Polo Towers in Las Vegas, where he served for over a year, growing the marketing footprint of his company’s largest region with 100 team members.

After five years at Diamond, Aaron and his wife took a brief hiatus from the company to travel and explore the world, an adventure that had been long in the planning. Upon return, they moved back to Orlando. In recognition of his success in past positions, Aaron was quickly named Director of National Partnerships and Director of Sports Marketing at Diamond Resorts, becoming an integral member of the team, responsible for their National Partnerships program.

At about the same time, Diamond Resorts had shifted their traditional timeshare marketing and sales model to an innovative, hospitality-infused experiential process to provide guests with access to a world of entertainment and activities. With a new focus on selling to a younger demographic, Diamond Resorts CEO Mike Flaskey knew he needed a very special employee to run these programs. Aaron’s personal experience with golf tournaments and total understanding of the timeshare industry made him uniquely qualified to accept this challenge.

In Oct 2019, Aaron proudly accepted the role of Senior Vice President of Sports Marketing and Executive Director of the Diamond Resorts Tournament of Champions, (TOC), which will be in its fourth year in 2022. He is responsible for overseeing all aspects of the execution and growth of the fully sanctioned LPGA Tour event, combining LPGA winners with world-class celebrities from major sports and entertainment fields. During 2019, Diamond Resorts held more than 3,000 special events at its various properties, including meet and greets with sports stars, catered events, and private concerts series with big-name musicians. These Events of a Lifetime® have distinguished Diamond within the industry.
Since immersing himself in this role, Aaron has guided two TOC events and worked with scores of country music stars and sports legends. As the events have grown in popularity, philanthropy remains a significant focus Through the various iterations of the TOC, Diamond Resorts has raised $4.3 million for charitable causes, including children’s health and Diamond’s Team Member Relief fund, which provided financial assistance to team members affected by the COVID-19 pandemic. TOC will continue through 2024 per an agreement with the LPGA.

“I was truly surprised by the ARDA Award and am most grateful for the recognition, which I consider a huge honor,” shared Aaron. “This will motivate me to work even harder and try to raise the TOC experience to new heights. The past eight years with Diamond Resorts have taught me a lot.

I have learned how to work with people from all sorts of diverse backgrounds and experiences who are all motivated differently. Figuring out how to get the best out of each person so that the program overall is a success is the most intriguing part for me. From my days on the marketing side working with the in-house concierge teams and the off-property contacts as well as the sales teams to now working on the Tournament team, Diamond has provided me the opportunity to grow and succeed in every role.”

“Through his leadership skills and passion for Sports Marketing,” said Mike Flaskey, “Aaron has become an essential member of the Diamond team. He has a gregarious personality and a keen ability to communicate with people on multiple professional levels; moreover, his relationships within the golf industry have helped to add credibility to our annual Tournament of Champions. We are extremely proud of the fact that ARDA has recognized Aaron with this special award, and we are confident that he will continue to make a positive impact in this role for the foreseeable future.”

Aaron Stewart’s dad would be proud of the legacy Payne Steward Kids Golf Foundation is carrying on. Watch video on Golf Course Trades Youtube Channel to learn how this foundation is helping with golf’s future.

Marge Lennon has been writing about the timeshare industry, its resorts and people since forever. She can be reached at Marge@LennonCommunications.com.

No Skiing, No Problem for I-90 Public Golfers This Spring
Meet the Par-3 Templates of Macdonald, Raynor, and Banks
To Top