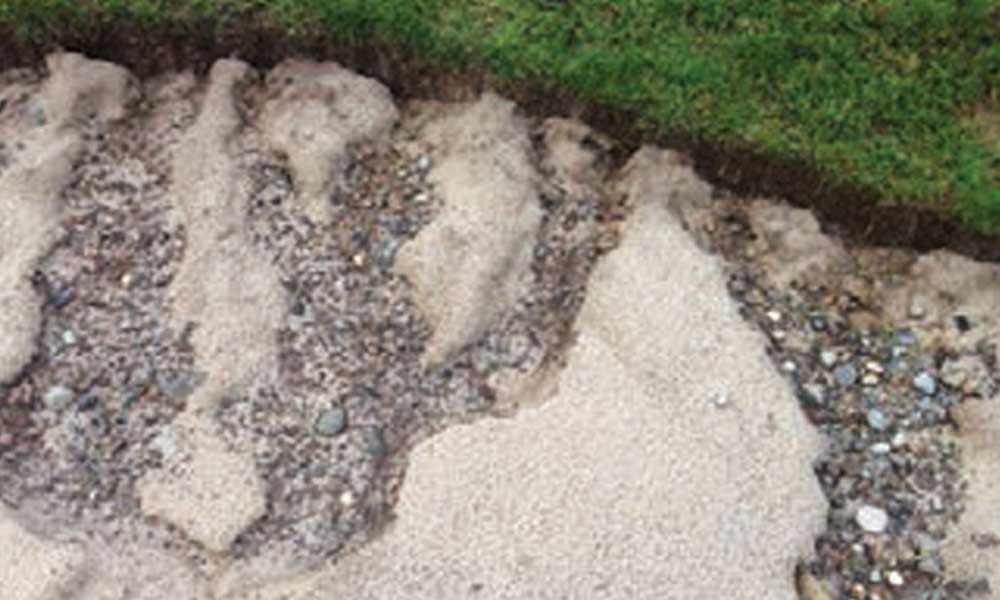 We have a lot of bunkers here at TPC Snoqualmie Ridge. One-hundred-fourteen bunkers. All of these bunkers were constructed right on top of the property’s native soil which is known as glacial till; a very dense mixture of boulders, gravel and coarse sand.

This stuff is what is merely inches underneath the white silica sand that is in our bunkers. Throw high annual rainfall amounts on top of the sand (75 inches in 2014) and BAM, you have frequent bunker washouts in which the sand is pulled off the sides of the bunkers, exposing the rocks and gravel underneath the sand. This is a perfect recipe for creating bunkers littered with unwanted debris such as silt, gravel and rocks.

This is obviously a headache for the maintenance staff to maintain and frustrating for golfers to play out of. The solution to this problem actually has many options. There are a myriad of different types of liners on the market that can be laid down on top of the subsoil on the floor of a bunker prior to filling with sand in order to keep the two elements separate and minimize contamination of the bunker sand. It seems like each region of the country has a preference for the type of liner used in their bunkers. The Puget-Sound region is no different.

A very popular option in our area of the country has been to line the bunker floors with sod. Several local courses have recently completed or are in the process of completing bunker renovations in which this method is employed. I recently had the privilege of attending a chapter meeting for our local superintendent’s association at Fircrest Golf Club in which I was able to see this process firsthand. The club is currently renovating it’s bunkers and as the picture below shows, they are using the sod liner method.

As you can see, the process is relatively simple. The floor of a bunker is lined with sod with the exception of the drain lines to maximize the flow of water through the bunker sand. The sod is laid down and given time to take root which at this time of the year can vary between six to eight weeks. Once the sod is firmly rooted, the grass is scalped down to stress the turf and/or sprayed with round-up, followed by smothering with new bunker sand. The thatch layer from the sod is essentially what serves as the liner that keeps unwanted rocks, gravel and silt from contaminating the clean bunker sand.

Through my years working in the industry, I have learned that what works somewhere else many not necessarily work here. We deal with many extremes here, especially as it pertains to weather. I am not so sure that this method has the ability to hold up to our high rainfall amounts and the constant exposure that the sod would receive due to bunker wash-outs. So, the only thing to do is do a test-run and try it and learn from it! For this experiment, we have chosen the greenside bunker on the right hand side of the 12th green. This bunker is actually one of the most contaminated bunkers we have and no matter what we do, we can’t seem to keep the sand clean of rocks and gravel.

We plan to begin work on this bunker this week starting with excavation of the old sand. Once the sand is removed, we will touch up our drain lines with new gravel as needed, order some ryegrass sod and get it rolled-out on the bottom of this bunker. After that, we must wait the prescribed six to eight weeks for the sod to take root before we can come back and cover it up with sand. This way, the liner will be anchored properly where we need it.

In the meantime, if you happen to hit your ball into this bunker, please play it from the drop zone that we will have painted next to the bunker or if you are playing for fun, you may play it as it lies in the bunker. All we ask is that you take extreme care when walking on the newly laid sod as not to disrupt any newly formed roots which will be very important for the anchoring process.

We are excited to see how this project turns out and will be monitoring the results over the upcoming season. Perhaps, this could be our solution to those burdensome rocks that plague many of our bunkers. We shall see .

Ryan introduces redesigned Ren-O-Thin power rake with seed box
The Ins and Outs of Getting Certified: It’s Well Worth the Effort
To Top