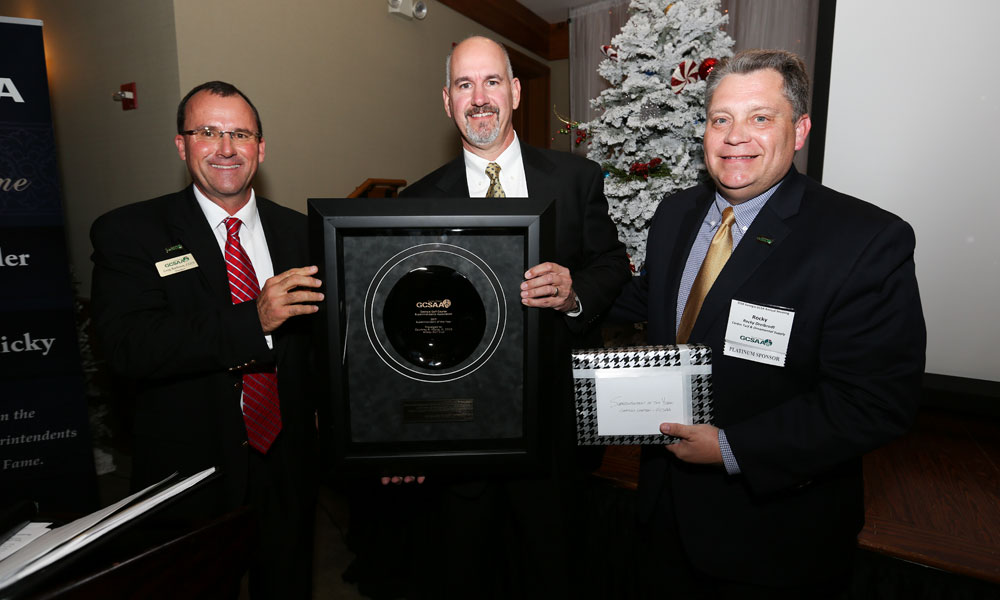 Members of the Georgia Golf Course Superintendents Association have honored Courtney Young, CGCS from Ansley Golf Club as their Golf Course Superintendent of the Year. Young, who has been at the 36-hole club since its Settindown Creek course opened in 1988, was recognized in front of about 250 people at the association’s annual awards banquet at Reynolds Lake Oconee on December 12.

The award comes after Young was nominated by two colleagues whose opinions justifiably carried considerable weight. One was Ralph Kepple, CGCS from East Lake Golf Club in Atlanta, which hosts the Tour Championship and FedEx Cup finale for the PGA Tour each year. The other was William Shirley, CGCS from Peachtree Golf Club in Atlanta, who also happens to be a member at Young’s club. Both are past winners of the Golf Course Superintendent of the Year award.

“During his nearly 30 years at Ansley, Courtney has consistently been known to have some of the finest greens – first bentgrass and now Champion bermudagrass – not only in the Atlanta area but in the southeastern region of the United States,” Kepple said. “Courtney has developed an incredibly strong relationship with the membership at Ansley. I have never talked with a member who was not fully supportive of Courtney and what he has accomplished at their club.”

Shirley provided first-hand proof of Kepple’s point. “Courtney is revered by the membership at Ansley,” he said. “I hear first-hand all the time about the admiration the members have for him. He consistently provides first-class playing conditions.”

Both Kepple and Shirley cited Young’s ability to mentor young professionals and his leadership efforts in support of the Georgia Golf Environmental Foundation. “Courtney is extremely intelligent,” said Kepple, who, early in his career, worked for Young. “We’re not that much different in age but I regard him as my mentor. He wants to help everybody and is such a good teacher. If he wasn’t a golf course superintendent I think he’d be a college professor. He’s that smart.”

Young’s award was the pinnacle of a big night for the association to round out 2016. In other highlights:

Work completed at Dennis Pines, 9 holes to go at Dennis Highlands, by McNeil, ASGCA
Golf Boosts the economy of Arizona by Billions
To Top