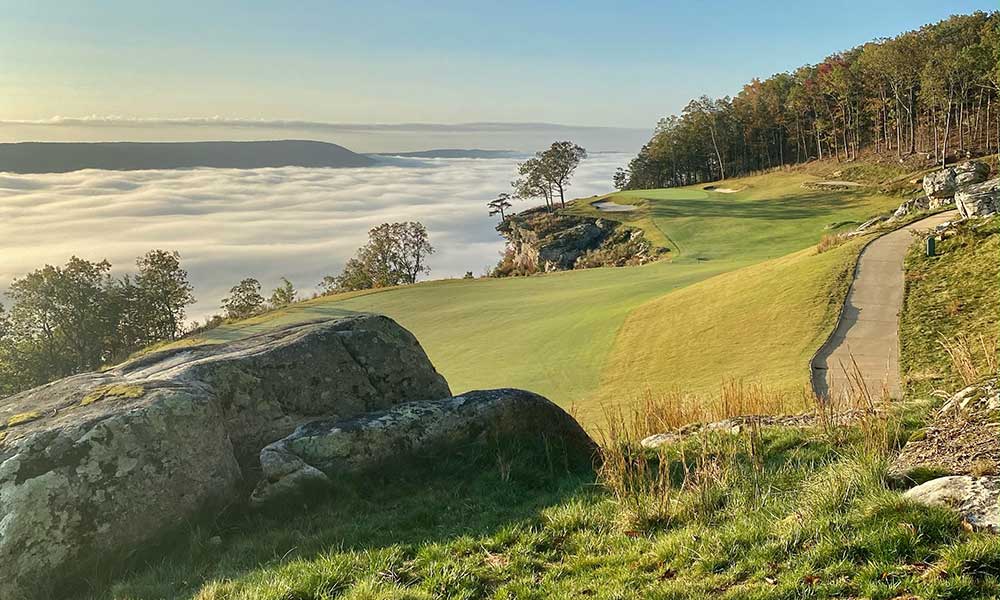 “We have elevation. Even though we’re in Georgia, we are at around 2,500 feet which dramatically changes our environment. So, we wanted two things; we wanted a good green-up and then we want we had to have something that was cold tolerant and able to endure a little bit more than what normal golf courses have to in Georgia,” said McLemore Superintendent, Ryan Emerson.

Emerson has been the superintendent of McLemore since June 2018, moving from Foxland Harbor Golf & Country Club located in the Nashville area, also a Bill Bergin original design. He came on board just four months after the course’s renovation started and for his first six weeks, he actually bounced between both courses located 3.5 hours apart.

Emerson explained he saw the potential of what the property and McLemore as a whole could be, even though he could only see the views and corridors where the holes were on the course during the renovation. “Also, being able to come to a second Bill Bergen course was something I really wanted to be a part of,” he said.

As they sought a cold-tolerant grass with early green-up at McLemore, they ended up selecting Latitude 36® Bermudagrass for the course renovation, which took place from August 2019 to June 2020.

Emerson said it has wound up being a great selection for their course as they’d wanted something that was dollar spot resistant so they didn’t have to spend much of their budget on fungus treatment. “In the first year with Latitude 36, we expected winterkill because of how harsh the winter was on the mountain. But we’ve had no winter injury at all, we have had no dollar spot and everything has performed exactly as advertised.”

In comparison to what was previously on the course, Emerson said the Latitude 36’s trademark has been early green-up and cold tolerance. “You can definitely tell where we sodded and where we didn’t. It’s also a finer textured grass than what was out here before.”

Over 16,000 rounds are played at McLemore annually. Emerson explained they have a short growing season for their grass, while counterparts just 30 minutes away have lower elevation and heat that bermudagrasses thrive in. “But even with our short season, the Latitude has done great for us.”

Emmerson said he can get the turf to recover quickly from drought spells and divots very easily. “As much play as we have in the offseason and while the grass is growing, I can get everything to grow in and fill in really easily compared to some of the other varieties.”

“The members love it both in the short-cut grass and the rough heights. Our rough doesn’t get as puffy. The ball sits up on Latitude 36 a little bit better than what was out here previously but also it has the finer texture and can be closely mowed.”

Emerson explained in order to be a member you have to own property at McLemore or invest in the golf course in some aspect. They also have a program called Stay and Play, where if you rent a house on the course you have access to the clubhouse, restaurants the golf course as well as the short course. “It’s worked out great and we have a lot of places for people to stay,” he shared. In Fall 2023 they’re also opening a Hilton Curio Collection hotel.

Following the course renovation with Latitude 36, McLemore replaced its driving range with NorthBridge® Bermudagrass, also released by Oklahoma State University. This was a variety Emerson had wanted to try for a while and due to its vertical growth, he was interested in putting it on the driving range.

He said they did not have a reason to go away from using Latitude. But, Superior Turf, Inc. who’d supplied both grasses on the course, explained how easy NorthBridge grew in on the farm. “We put it on the driving range which was expanded to two and a half acres. With the amount of play that we have and the lateral growth of NorthBridge and how it took up plant growth regulators and overseed made it a really good choice for that,” he said. “It turned out very nice and more than anything we wanted to try something new.”

They’ve only had NorthBridge at McLemore for less than one growing season but Emerson said he’s interested to see how it compares to Latitude 36 the longer they have it on the course. “We are very, very happy with both the Latitude and the NorthBridge,” he shared.

Emerson said the two grasses are very similar in color and the only difference he’s observed so far is the lateral growth. “I like both of them. I am interested personally in looking at NorthBridge a little more as we see what its cold tolerance is compared to Latitude 36 because we didn’t have that hard of a winter this past year. I’m interested in how they’ll compare to one another as far as how they make it through a winter.”

He also wants to compare root depth once everything is established to see if there’s a difference between the NorthBridge and the Latitude 36.

Emerson also visited Dallas, TX where he toured the NorthWood Club, the Maridoe Golf Club and another NorthBridge course. He said all three courses using NorthBridge looked great and he hasn’t found anything he dislikes about it yet.

Sod Solutions has helped successfully develop and release to the market over 20 different turfgrass varieties over the past 28 years including PalmettoⓇ and CitraBlueⓇ St. Augustine, EMPIREⓇ and Innovation™ Zoysia and CelebrationⓇ, Latitude 36Ⓡ and NorthBridgeⓇ Bermudagrass. The company is based in the Charleston, SC area.