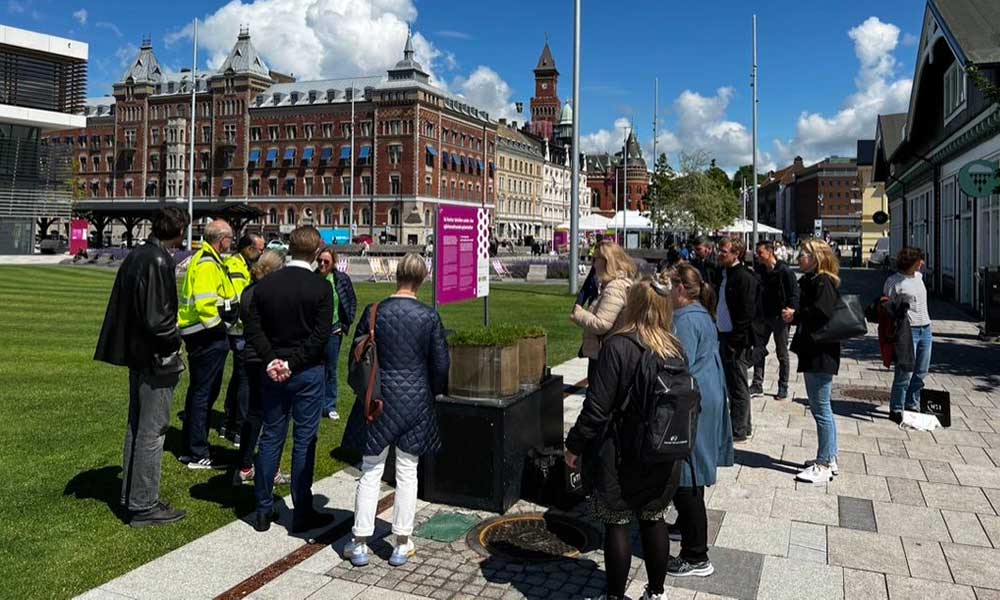 The fourteenth International Turfgrass Research Conference (ITRC) will be held in the Danish capital of Copenhagen later this month (from July 10-15), organized by the Scandinavian Turfgrass Environment Research Foundation (STERF). And, as well as hearing papers from the world’s leading turf researchers, delegates will make a site visit to the Swedish city of Helsingborg to view Ångfärjeparken, site of the world’s first hydroponic lawn, planted using technology from Swedish firm Capillary Concrete.

The lawn in Ångfärjeparken is a fully automated self-watering system uses the patented Capillary Hydroponics system — water, fertilizer and additives – which allows water to be emptied and filled quickly by capillary force. As a result, the roots ‘breathe’ while always having perfect moisture content without the need for sprinklers above ground.

“This system enables water savings of up to 85 per cent on a lawn, and there is no leakage of nutrients or other agents to the environment, which are really sensational improvements from yesterday’s systems. It can also take much more wear and tear, making natural grass a viable option instead of artificial grass,” says Martin Sternberg, CGCS, CEO and founder of Capillary Concrete.

Unusually for a non-academic, Sternberg has been invited to present to the conference. He will speak on the hydroponic system, and in particular, its potential to reverse the trend towards installing artificial grass in high traffic areas. “Artificial grass is a common solution for high-traffic surfaces, effectively out-competing natural grass, even with its obvious negatives relating to appearance and environmental damage,” says Sternberg. “Despite polluting our ecosystems through microplastics, and its high carbon footprint, the plastic grass is currently winning. This is because, in high traffic areas, traditionally-grown natural grass is typically unusable more than a quarter of the time. Now there is a solution. Using the Capillary Hydroponics solution, natural grass areas of all sizes can be made much more durable, and can outcompete artificial turf once and for all. It looks better and costs much less than artificial turf.”

With Capillary Hydroponics, turf managers can easily and automatically control the exact level of moisture within the system. This means that water can move more easily through the system without drying out the plants and without excess irrigation. The levels of carbon dioxide are also minimized as oxygen gets introduced several times a day and the porosity of the soil is higher.

The system is currently being tested at Michigan State University by Professor Thomas Nikolai, the university’s Senior Turfgrass Academic Specialist, known as Doctor Green Speed. Nikolai has overseen the construction of six identical greens, three built with Capillary Hydroponics and three with a conventional USGA rootzone. The main focus of the project is water consumption. He says: “If this works, it changes everything, without question. Not only because it will save water, energy, and money, but also because it will make the focal point of the golf course sustainable.”

The patented Capillary Hydroponics is the world’s first fully hydroponic growing system for turfgrass automatically regulates the water levels and increases gas-exchange by raising and lowering the water table to produce deeper, healthier roots and higher-quality turfgrass. This system also allows easy monitoring of EC levels, PH levels, temperature, and water flow. The system divides the turf area into two equally large areas. A control basin automatically oxygenates and pumps or drains water between the two areas on a regular schedule. The system is powered by a small solar panel, and the water levels in the turf profile can easily be adjusted.