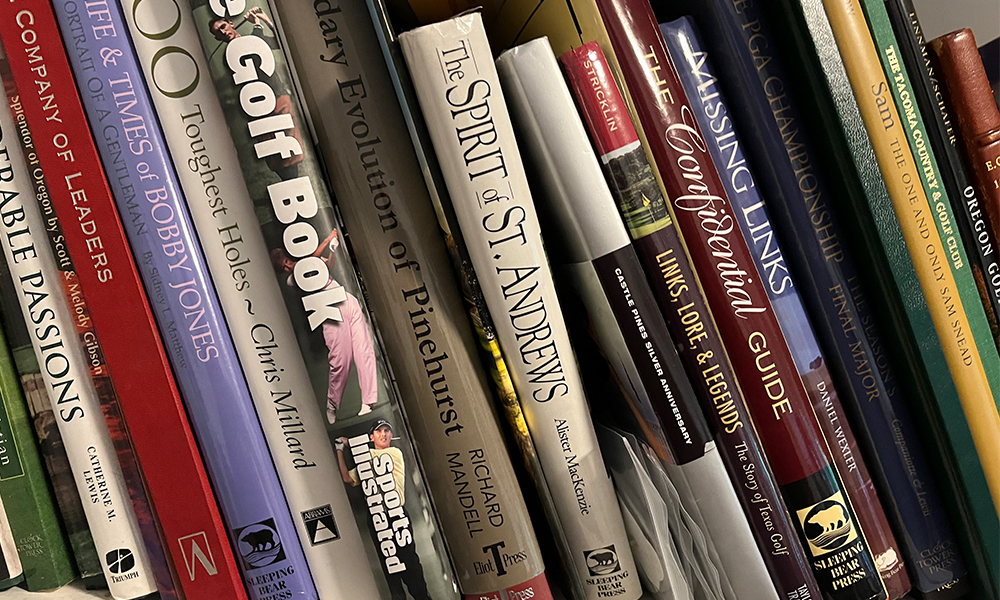 I like books, which should not be surprising for someone with an English degree. I like them so much I’ve written and/or published nine of them. Three club histories are also now in the pipeline.

Not surprisingly, I have a special affinity for golf books. Reading “Following Through” in the mid-1980s inspired me to travel over 200,000 miles and visit and play over 550 courses while researching three editions of my book, “Golf Courses of the Pacific Northwest.” Herbert Warren Wind’s tome contains long essays he penned over 25 years for “The New Yorker.” His other claim to fame is coining the term, “Amen Corner,” for Augusta National’s crucial back-nine section: the approach shot at No. 11, the tee ball at the water-guarded par-3 12th, and the par-5 13th, where Rae’s Creek winds along the left and perilously close to the green.

As a member of the Golf Writers Association of America for 30 years, I’ve been the fortunate recipient of hundreds of review copies of golf-related titles.

I made sure to include a Book Review tab while serving as the editorial director of Cybergolf.com from 2000-15, which accelerated my address as a worthy destination for golf book publishers. During its heydays Cybergolf drew 2 million monthly visitors who could access over 200 book reviews.

I wrote most of these reviews while “farming” out a few new books to some of the 100 freelancers on staff. Other reviewers included the late, great Bob Spiwak (https://www.golfcoursetrades.com/making-the-rounds-part-8/) , Jay Flemma (a contributor to this Golf Course Trades), the inimitable Tony Dear (featured in https://www.golfcoursetrades.com/golf-scribes-making-the-rounds-part-16/), and a dentist friend with a powerful passion for golf, Dr. John Wagner.

Now retired in Arizona, John and I were fellow members at Sand Point Country Club in northeast Seattle. He was a director of the Pacific Northwest Golf Association and Washington Golf for 18 years, including serving a three-year term as president. He was chairman of the Evans Scholarship Committee for two decades and instrumental in the founding of its annual fundraiser, the Evans Cup of Washington, in 1992.

A voracious reader, John was eager to review any books that came my way. Dr. John would regularly stop by my house to pick up new titles and return the ones he’d recently read. John would cut right to the chase in his reviews; it was quickly clear whether he liked a book or hated it. I gradually nudged John to explain exactly why he arrived at an opinion, pro or con. Regardless, I appreciated his honest, straightforward thoughts as they were invariably spot-on.

As noted in the accompanying photos, the large shelves in my office now sag under the weight of some prodigious golf books. These 4- to 5-pound compilations are replete with heavy-duty paper, Smyth-sewn hardbound covers, ponderous subjects, and glorious four-color photographs. The oversized “Ben Hogan – The Man Behind the Mystique” by Martin Davis, won’t even fit in my 14-inch-high shelves. Originally, these titles bore lofty price tags well over $50. They’re now much cheaper when purchased used on Amazon.

My shelves also house more modest-sized titles. Many are small “how-to-hit-the-golf-ball” manuals, none of which can top Harvey Penick’s “Little Red Golf Book.” The legendary Penick was known for his common-sense approach to the golf swing. It contains none of the mechanical mumbo-jumbo like the quirky “Homer Kelley’s Golfing Machine” by Scott Gummer, or other golf-swing manuals filled with technobabble.

Also in the petite category are “Building a Practical Golf Facility” by Dr. Michael J. Hurdzan; “The Wisdom of Women’s Golf” by Dr. Criswell Freeman (a man); “Brassies, Mashies & Bootleg Scotch” by Bill Kirkpatrick; and the tiny but elaborately-titled “Undercover Golf – An Off-the-Links Guide to Improving Your Game – at Work, at Home and on the Sly,” by Joe Borgenicht.

Another one on the small side – at a mere 60 pages – is the “The Gate to Golf” by James Douglas Edgar. First written in 1920, it has no protected copyright and comes with this odd background: Edgar (1884-1921) was an English professional golfer and golf writer. He won the French Open in 1914. The “Gate to Golf” is based on swing discoveries he unearthed in England. Edgar had an ailing hip that prevented him from turning freely. Through a series of experiments, he found that a restricted hip turn allowed a repeatable swing with excellent power and control. Basic photos illustrate the techniques described in the text. This book had a significant impact on golf instruction, right up to the present time.

The book is prefaced with an unusual passage, particularly considering most publishers are litigious when copyrights are breached (and rightfully so): “This work is in the public domain in the United States of America, and possibly other nations. Within the United States, you may freely copy and distribute this work, as no entity (individual or corporate) has a copyright on the body of the work. Scholars believe, and we concur, that this work is important enough to be preserved, reproduced, and made generally available to the public . . . We appreciate your support of the preservation process and thank you for being an important part of keeping this knowledge alive and relevant.”

Some of books between coffee-table and pocket sizes are thoughtful treatises on golf course architecture. Several in this genre stand out: “Spirit of St. Andrews” by Alister MacKenzie; “The Golf Courses of Stanley Thompson” by Canada’s best golf writers; “Fifty Years in a Bunker” by Pat Ruddy; and “Golf Has Never Failed Me,” by Donald J. Ross.

Also gracing the golf landscape are autobiographies and novels. Here’s an anecdote about the first category. In the 1990s I was the media director of the Fred Couples Invitational in Seattle. In 1998, the third edition of “Golf Courses of the Pacific Northwest” was fresh off the press. In the field that year was Peter Jacobsen. This friend of Seattle-born “Boom-Boom” grew up in Portland – 180 miles to the south in Oregon – and had just released his first book, “Buried Lies,” co-written by Jack Sheehan.

Before the opening round I brought a copy of my new book for Jacobsen with the inscription: “Peter, thanks so much for all you’ve done for Northwest golf.” I also brought a copy of Peter’s book for him to sign. Handing “Jake” his book, he wrote, “Jeff, thanks for all your contributions to the game!” I then gave him my book. After reading my inscription, which mirrored his, we had a good chuckle.

I continue to peruse golf books. A couple of recent reads stand out. One is “18 Holes with Bing: Golf, Life and Lessons from Dad,” written by Nathaniel Crosby with John Strege. Published in 2016, it’s a series of warm and informative stories told by the son of one of the all-time most popular singers and an Academy Award-winning actor. The senior Crosby – born in my home state of Washington – loved golf almost more than anything else on our planet.

The most surprising nugget is how Bing – founder of the Pebble Beach Pro-Am in 1937 – contributed to the game in so many ways, often anonymously. He also retreated to adjacent fairways whenever his son was in tournaments as to not draw attention from Nathaniel, who, in 1981 at age 19, became the youngest-ever champion of the U.S. Amateur (13 years later a youngster named Tiger broke that record). It was held at The Olympic Club in San Francisco, not far from where Nathaniel grew up in Hillsborough.

The other is Alan Shipnuck’s “Phil: The Rip-Roaring (and Unauthorized) Biography of Golf’s Most Colorful Star.” It’s a superbly researched tale comprised of decades-long interviews with Phil, his wife Amy, longtime caddie Jim “Bones” Mackay, and dozens of others. Shipnuck – who has covered over 70 major championships for “Sports Illustrated” – reveals the wildly disparate facets of “Phil the Thrill.” In the final chapter, Mickelson tells Shipnuck of his interest in joining the mega-bucks, “sports-washing” Saudi-backed LIV Tour. This decision is not surprising as Shipnuck informs us that “Lefty” incurred millions of dollars in gambling debts over the years.

In sum, golf books are microcosms of life – representing the good, the bad and the ugly. They’re also a lot of fun to write.