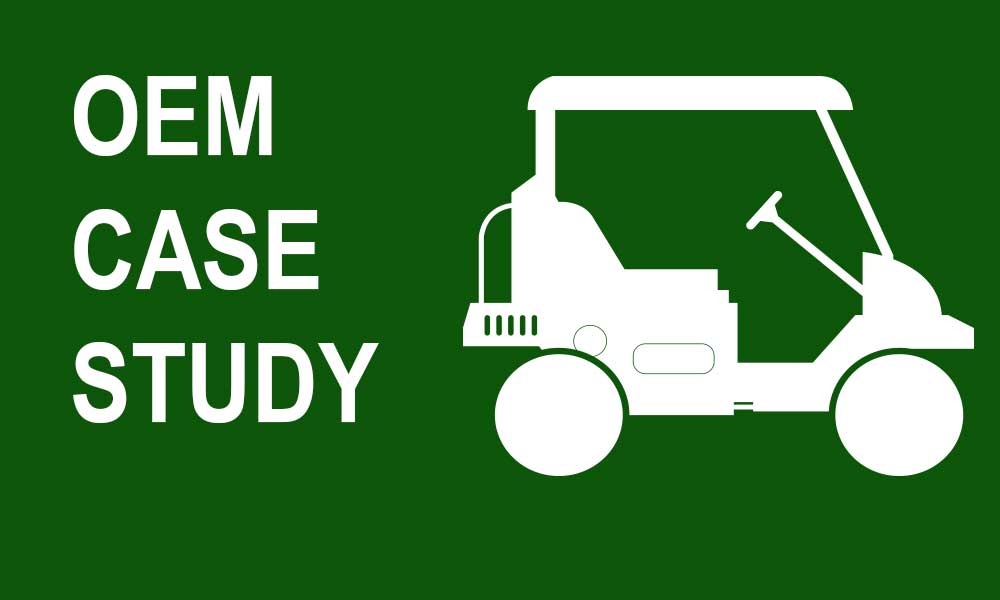 When most people think of driving, a golf cart probably comes to mind. Others might picture a golf ball headed down a long fairway. For the team at Club Car, it’s a combination of the two.

For more than 60 years, Club Car has been an industry leader in the development and production of golf carts and utility vehicles. They aim to provide the best-valued personal transportation option on the market. In order to remain the market leader in the golf course industry, Club Car knew they needed a golf cart battery partner that could help drive them forward.

Club Car initially ventured into the lithium-ion battery market with their Onward® consumer products, working with a golf cart battery manufacturer based outside the United States*. They noticed that competitors were utilizing battery power to enhance their golf carts, so the Club Car team moved quickly to bring their consumer technology to the golf industry. They launched their first lithium-ion battery-powered golf cart in 2018.

“When we launched, we had huge competitive pressures,” says Joe Deal, golf engineering leader at Club Car. “Shortly after the initial launch, we knew we had to make some pretty significant improvements relative to cost and performance.”

The Club Car team spotted areas where they could improve — especially with the golf cart battery. While they gained good market penetration with the first-generation golf cart, they knew improvements needed to be made.

A powerful partner in Vanguard

As Club Car was seeking out a new partner, it became clear that the Briggs & Stratton team would be the perfect fit to compete in the golf cart battery power market. While Briggs & Stratton has an impressive resume with its Vanguard engines, they are also a leader in commercial lithium-ion battery pack technology. Currently, there are three sizes of Vanguard batteries on the market – 3.8 kWh, 5 kWh, and 10kWh. The Briggs & Stratton team’s innovative spirit and ability to adapt, combined with a quality lithium-ion battery, were exactly what Club Car needed.

Club Car’s leadership was also excited about the opportunity to have a partner based in the United States. Not only did this make the supply chain shorter, but it also eased communications and offered the possibility for the development to move more swiftly.

From the beginning, the two teams had a great working relationship. “Everyone understood the mission and had a can-do attitude,” says Deal. “Especially on the Briggs & Stratton side, they never said no to anything and always found a way.”

Club Car was seeking flexibility, adaptability, and speed. With growing market demand for their product, the team set out with an ambitious seven-month timeline. Briggs & Stratton was up for the challenge and showed their dedication right away by offering to establish a brand-new facility exclusively dedicated to Club Car. To accomplish Club Car’s timeline, the Briggs & Stratton team had determined they would need a larger space that was readily available to meet Club Car’s needs. After discussing some options, Vanguard decided to open a new facility in Tucker, Georgia, two hours away from Augusta, where Club Car is located.

“The ability to get to the facility the same day or the next day to work through any challenges as we went through the development process was a lot more efficient than going halfway around the world,” says David Hules, golf portfolio leader at Club Car. “That was really a key decision point in partnering with the Vanguard and Briggs & Stratton team.”

Getting a facility and assembly line up and running so quickly presented its own challenges. However, both teams worked rapidly to get things going, with team members in constant communication to keep the project on track. Even amid a global pandemic, supply chain challenges, and the transition of ownership for both companies, Briggs & Stratton was able to open the Tucker plant on schedule.

Not only did the new plant allow Briggs & Stratton to get Club Car the batteries they needed on time, but it also delivered three times the initial number that was planned.

The benefits of a better golf cart battery

“A flooded lead battery lasts four years in a typical golf cart application,” says Hules. “The lithium technology lasts up to eight years, which is a huge increase in value for our customers and for ourselves.”

Vanguard batteries are also very sustainable. They have a second life in them, meaning that at the end of their life cycle there is still about 80% battery capacity left. The batteries can then be reused in other applications. The Vanguard lithium-ion battery pack was a great solution for Club Car because of its adaptability. Certain parts of the golf cart battery can be modified to accommodate a different vehicle.

“When you look at the lithium landscape, the cylindrical cells in the Vanguard pack offer the most flexibility and custom configuration,” says Deal. “There is a scalability of the platform to not only handle golf industry but also utility, consumer and even potentially larger vehicles.”

As well as being efficient, sustainable and adaptable, the Vanguard lithium-ion battery offers features that help make it smart and durable. A Battery Management System (BMS) helps to monitor and measure information like the pack’s temperature, charge and discharge currents, and voltages of each individual cell bank. That technology can be used by Club Car to help identify ways to continue evolving their golf carts to perform even better for customers. All of this combined made it the perfect battery for Club Car’s needs.

A process that normally would have taken two years took Briggs & Stratton and Club Car just seven months. Because both teams were so dedicated to the timeline, Briggs & Stratton and Club Car were able to meet and surpass ambitious goals. They now lead the lithium-ion golf cart market with a battery that has the best-in-class range; going for two and a half rounds on a typical golf course.

Intending to have a long-term partnership, Briggs & Stratton and Club Car already have plans to move forward with other projects to improve their battery technology. “We can’t be successful without each other,” says Hules.

Thanks to quick work and a collaborative partnership with Briggs & Stratton, Club Car has been able to maintain its market leadership in the golf cart industry. Demand for golf carts remains high and that means expectations for a successful partnership remain high as well. Both Club Car and Briggs & Stratton are powered up and prepared to meet and exceed those expectations.