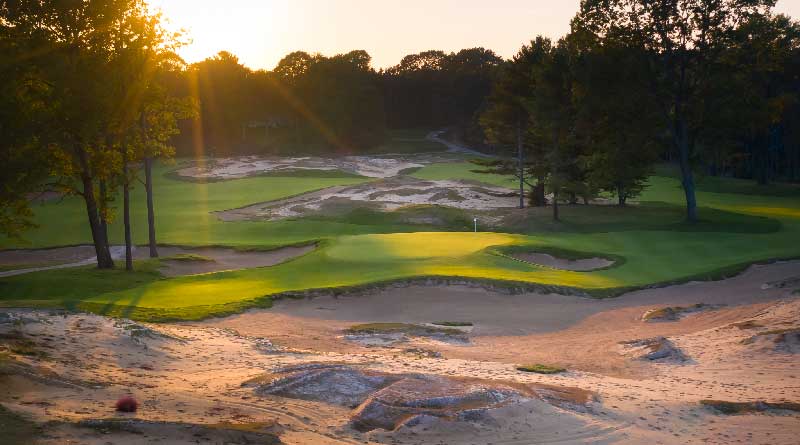 To those who love the game, golf courses are special places. But American Dunes, the Jack Nicklaus Signature Course designed as a tribute to the U.S. military, is more than special; it’s a national treasure. In many ways, it is sacred ground.

Upon entering the property at American Dunes, golfers follow a path defined by a dramatic, eight-foot-high memorial wall. Shared on the wall are the stories of fallen U.S. soldiers and of the Folds of Honor Foundation that provides educational scholarships to the families of service members.
The actual boot prints of soldiers who died in service to their country, set into the concrete of the path, ensure that the message of this golf course imprints on the heart as well as the mind. And on every tee, memorial markers commemorate military veterans, fallen heroes, active-duty service people and Folds of Honor scholarship recipients.

Members of the media who have seen American Dunes described it as, “one of Jack’s best.” Industry professionals who worked on the project called the environment “challenging” but their involvement in course construction, “a privilege”.

When the course officially opens to the public in May, all who experience American Dunes will be awed by its mission and humbled by the stories of the heroes the course was built to honor. Jack Nicklaus summarized the emotions the course inspires when he said, “I love the game of golf, but I love my country even more.”

A Course that Seemed to Have Run its Course

Grand Haven Golf Club was an 18-hole public-play facility that opened in 1965. Located some 30 miles west of Grand Rapids, near the eastern shores of Lake Michigan, the charming township of Grand Haven and the surrounding area are known for windswept pines, hardwood forests, rolling sand dunes and great places to golf.

For decades, Grand Haven Golf Club was recognized as one of those exemplary courses and over the years, made Golf Digest’s Top 100 list multiple times. However, by 2018, Grand Haven was a tired course with a tired business plan.

Lt. Colonel Dan Rooney and his parents were the principal owners of the Grand Haven Golf Club. Dan is an Air Force Reserves F-16 pilot, a PGA professional and the founder of the Folds of Honor Foundation, a 501(c)(3) nonprofit organization. Dan, who is the world’s only combo fighter pilot/PGA Professional, hosted the first fundraising tournament for Folds of Honor at Grand Haven.

With his parents ready to retire, Dan was forced to consider the property’s future. The possibility of selling the land for residential housing loomed large. Then, visionary Dan contacted patriotic Jack.

Dan convinced Jack to “just look at the course” and assess it. Dan asked Jack, “Am I crazy? Is this course worth saving to use as a tribute to the U.S. military and as a resource for funds that could be wholly directed to Folds of Honor?”

Touch the Greens, Touch the Tees

Persuading Jack to save Grand Haven Golf Club as a means to fund a charity he already believed in was easy. A plan was developed to redo some greens and tees and remove a few trees. Doug Bell, PGA Professional and General Manager at Grand Haven explained, “The original plan was small. We were going to make the course into a very good, playable golf course. We’d touch the greens, touch the tees and blend the new with the old.”

Jack, working with Chris Cochran ASGCA, Senior Design Associate at Nicklaus Design, would refresh the golf course, donating his time to this worthy project. As a team was assembled to make the necessary renovations, revamp irrigation and execute other steps of the course update, companies recognized for integrity and leadership were contacted.
Superior Golf Concepts came on board to lead construction along with shaper Doug Graham, of Graham Golf Inc. The Pignato Group Irrigation Design Consultants were brought in and Connecticut-based Winterberry Irrigation was contracted to make minimal upgrades to existing irrigation.

Chris Daigle, Vice President at Winterberry Irrigation explained, “We had a full schedule of work booked when we were contacted about American Dunes. It didn’t matter. We wanted to do this. We mobilized in four weeks. My dad was a veteran. We work regularly with the Veterans Administration on irrigation for VA cemeteries. Supporting this project was the right thing to do.”

Lt. Colonel Rooney often describes the decision to do the right thing as “choosing between an easy left or a hard right.” Ironically, as the project continued, the contractors involved faced more than their share of hard-right decisions.

First, You Take Out a Few Trees and Then a Few More

As beautiful as the hardwoods are in Michigan, many of the trees on the course were past their prime, overgrown or crowding the fairways. A few trees were removed and then a few more. Quickly it became obvious that this golf course, located so close to majestic Lake Michigan, was begging to showcase its rolling dunes with wide and open fairways and an almost links-style design on many holes.

Overnight, a course refresh became a full-blown golf course renovation. Although contractors found themselves needing to increase significantly, the time and assets allocated to do the job, they never missed a beat. Construction didn’t stop when the project grew from minor to major and it didn’t stop when Mr. Nicklaus would rethink his design plans.

“To accommodate design changes, we sometimes had to uninstall an irrigation line we had just installed,” said Chris. “Not everybody is up for that kind of challenge, but we’re flexible. To pull off a project like this one, you have to be able to get along with a lot of different personalities and disciplines.”

Doug Bell observed, “I know the contractors all do a great job on every project they work, but on this one it seemed like everyone was willing to stay longer and work harder even in the face of historic environmental conditions and all the stoppages and disruptions of a global pandemic.”

With the water table in Western Michigan so high 100-year-old homes were sliding into the lake, every hole the contractors opened seemed to fill with water as they dug. The National Weather Service described the weather saying, “West Michigan experienced record-breaking cold, massive hail, strong winds and beach erosions,” which included windstorm so severe and ill-timed that the course seeding schedule was thrown off by eight weeks.
The crew at Winterberry saw their role of “30 percent irrigation update using existing mainline PVC irrigation” turn into “90 percent new mainline installation with high-density polyethylene.”

“The weather was brutal,” said Chris. “It could be 75 degrees one day and 30 the next with 50-mile-an-hour winds. Fusing pipeline in those conditions is very difficult. Everything about fusion must be clean and pristine.

“But our crew knows how to adapt. We have some unique equipment that gives us an edge. We give a 10-year warranty on anything we do that’s monolithic, meaning fused together, plus we are partnered with a company that offers a 25-year warranty on infrastructure and materials. That’s just different from other irrigation contractors.

“Before my foreman left the project, he called me. You could just hear his smile as he was watching the irrigation, blowing on the greens and growing the grass. All our projects are special, but this one was amazing.”

The clubhouse bar at American Dunes is named CAVU, an aeronautical meteorology acronym for “ceiling and visibility unlimited.” The name feels highly appropriate for a golf course where the back tee markers are shaped like patriot jets and, courtesy of project sponsor Budweiser, beer is tapped from an AIM-9X Sidewinder missile.

Most importantly, one hundred percent of American Dunes’ profits are targeted for the Folds of Honor Foundation. Through this effort, spouses and children of fallen or disabled servicemen and women will have educational opportunities that might not otherwise be possible.

At American Dunes, CAVU is a great name for the bar. But “ceiling and visibility unlimited” clearly carries a meaning all its own for the crew that built the course and the military families who, thanks to Folds of Honor, will benefit from every round of golf played there.