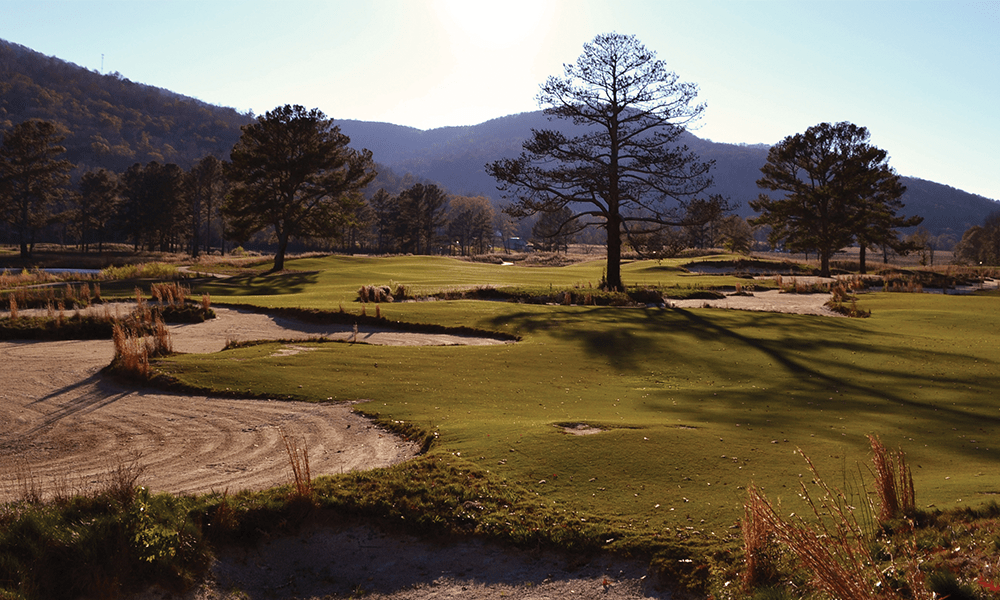 Rob Collins and Tad King are the talented duo behind King-Collins Golf Course Design. Together, they have built a brand that is quickly becoming one of the hottest names in golf course architecture and construction. Their company is so unique in its approach to envisioning how golf can be played, a number of golf writers have questioned if King-Collins Golf will be the change agent that alters the trajectory of the game of golf forever.

The Golf Course Trades had the opportunity to ask Rob this question during an interview with him this past August. But before we share his thoughts with you, we first want to tell you about the days when Rob’s and Tad’s phones went weeks, months, and sometimes years without ringing.

Planting the Seed: I’d Never Seen Golf Courses Like This Before

In 1994, Rob Collins was an art history major at Sewanee, The University of the South when he had the opportunity to take in The Open at Turnberry in Scotland. As part of the experience, he had the chance to play both the Old Course and the New Course at St. Andrews. Rob explained, “The trip made a huge impression on me. I’d never seen anything like it ever before. And I realized there was a lot more to golf than what I had seen for the first 19 years of my life.

“The more I thought about it the more I became interested in the creative aspect of how you would create a golf course. I knew that there were people out there who were golf course architects, but it seemed like such a strange and far-off profession that it was hard to even imagine what steps one would take to do that. So, I held on to this wild dream of mine, and didn’t really tell anyone for a while.”

A series of unfulfilling jobs helped crystalize Rob’s clarity about his future. He applied to Graduate School at Mississippi State as part of the Landscape Architecture program.

“They were very open to me tailoring to the greatest extent possible, my schooling towards golf architecture,” said Rob. “I made it clear from the get-go that I didn’t have any interest at all in being a landscape architect, but really was very, very interested in being a golf course architect. They were fine with that.

“I graduated from Mississippi State in 2005 with a master’s degree in landscape architecture. The courses helped me understand the basics of planning. I learned a lot about plan production and thinking about things in a landscape scale. Some of it was basic, some not, but all a good solid foundation of planning skills that I was able to apply to golf architecture. And I was fortunate to come out at a time when they were building about 300 courses a year domestically.”

Rob worked as an intern for Golf Architect Rick Robbins of Robbins & Associates International in 2004. After graduation, Rick referred Rob to Frank Henegan. “At that time,” said Rob, “Frank was a Senior Designer with the Gary Player design firm, which led me to some great projects, including working on a course in Eastern British Columbia and working a project in Florida where I first met my current business partner, Tad King. We connected immediately because we both believe that courses could be built more economically, more efficiently, and more artistically.”

No New Golf Courses in a Recession

The golf course construction boom of the late 1980s to early 2000s came to a screeching halt when the mortgage crisis of 2006 catapulted the U.S. economy into recession. Rob was soon back home in Tennessee trying to survive on landscape architecture projects, all the while desperate to get back into golf course design and construction.

“I called Tad one day,” said Rob, “and I said, ‘Let’s do this thing. If we can just get one project in the ground during this recession, we’ll have an opportunity to come out of the backside of the recession and start to build a name for ourselves and have a chance to show the world what we can do.’

“With the architect on one side and the contractor on the other, you run the risk of having a situation where there are details lost in translation. We liked the idea of being able to control the artistry and completely control all the shaping. We felt we could deliver a better golf course that way and also do it less expensively, with more efficiency.”

One Project in the Ground

In 2011, the phone finally rang, and the one pivotal project Rob and Tad were seeking fell into their laps. Hired to do what became more of a construction project than a renovation of the 9-hole Sequatchie Valley Golf & Country Club in South Pittsburg, Tennessee, King-Collins Golf reworked the course with vengeance.

“We completely remade the landscape,” said Rob. We moved about 300,000 cubic yards of earth. We poured our hearts and souls into it. And then, through a convoluted set of circumstances, our client decided that they did not want to be in the golf business anymore.

“They walked away from the project when it was basically complete, saying, ‘Hey, would you be interested in taking it over on a long-term lease?’ My first thought was hell no, I don’t know how to run a golf course.’ But we talked about it and decided to take the plunge.”

For the first few years, the grossly undercapitalized course, renamed Sweetens Cove, struggled. But there exists, according to Rob and Tad, something is known as Sweetens Cove Magic. The existence of this empowerment is hard to doubt when you realize that a 9-hole course that opened without a clubhouse, a paved parking lot, proper signage, or an adequate maintenance crew began slowly to attract golf industry attention and acclaim. Soon a cult-like following of devotees developed, including Peyton Manning, Andy Roddick, Jim Nantz, and others who soon went from fans to business investors.

What Makes this 9-Hole Course so Sweet?

In 2019, Sweetens Cove was ranked 2019 by GolfWeek as #21 on the list of Top 100 Public Courses and #49 on the list of Modern Courses. The contours are bold, the features are artistic without being pretentious and the ambiance of the course is so authentic, you are welcome to bring your dog, to wear your jeans and, if you like, imbibe pre-round with a shot of bourbon, a tradition that has inspired the launch of Sweetens Cove Spirits.

Sweeter still is that Rob and Tad think golf should be challenging for players without sucking the joy out of the game or taunting golfers with distances and designs that are unplayable for anyone except tour legends. “I think,” said Rob, “the most interesting hazard in golf is the combination of short grass and tightly mown, fast turf. That opens the full suite of shot-making opportunities and potential things that golfers of all skill levels can do with the club in their hands.”

Rob refers to Sweetens Cove as a fruit-bearing tree that took a few years before it began producing. Since word has spread about the magical 9-hole course in Tennessee, King-Collins has built the behemoth 18-hole Landmand course (see Winterberry Irrigation’s Super-Sized Project in Nebraska). They’ve also created the quirky 9-hole Inness Course in New York’s Hudson Valley, have remodeled the legendary urban course, Overton Park, in Memphis, and are starting on the new Red Feather 18-hole course in Lubbock, Texas. Each of these courses is another unique golf experience and a story in itself we hope to share in upcoming articles.

The uniqueness of each of these courses brings us back to where we started. Is King-Collins Golf Course Design and Construction changing course design and the game forever? To this question, Rob responded, “I never really thought about that until my dear friend Patrick Boyd, who was our GM at Sweetens Cove for a long time, looked at me back in our early days and said, ‘Rob, I really think in a hundred years, people are going to look at this place and say this is the epicenter of where it all started to change.’

“At first, my reaction was, “What, we can’t even pay the light bill?’ But that was the first time I ever really thought about the impact Sweetens Cove has had. And I do think our courses are changing the game. Without ego and hyperbole or boastfulness, we do have a unique approach, and we think about things differently. But at the same time, we are also drawing off ancient lessons. A lot of what we’re doing isn’t necessarily new. It’s just repurposed in a way. And in that repurposing, there is a sense of newness to it.”