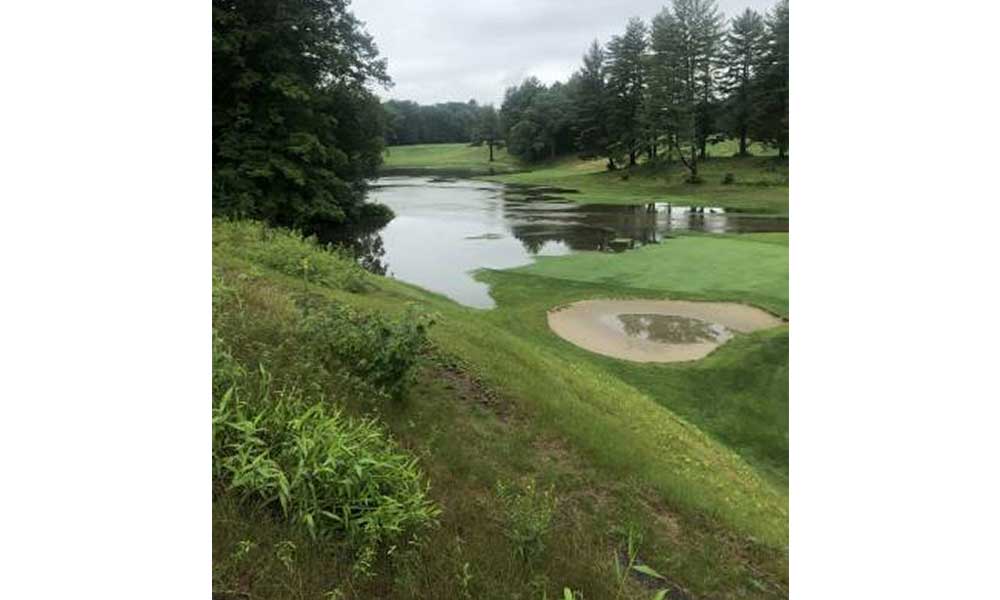 Tired of all the rain that’s been coming down across Western Mass. all summer? So are local golf courses.

With Mother Nature continuing to pour buckets down throughout the weekend, to the point where some roads and local swim areas were shut down, multiple area courses were forced to stay closed Monday.

The ninth fairway and area around the green at the Country Club of Greenfield was flooded Sunday after another weekend of heavy rain forced golfers off the course there.

CCG Head Professional Kevin Piecuch said that the course hosted a members’ event Saturday that was only able to get in nine holes due to the weather and course conditions. The club was closed Sunday and again Monday in hopes that it would dry out enough to be able to open in some capacity Tuesday, though Piecuch said that was not a certainty.

“At some point, the ground is saturated and there’s not much you can really do,” Piecuch said. “(Golf Course Superintendent) Chris Reid and his staff are doing a fantastic job trying to get us playable but Mother Nature is undefeated.”

The ninth hole at CCG has flooded in a similar fashion before, though it hadn’t receded much by Monday afternoon. Piecuch estimated he’s seen similar conditions there eight to 10 times during his career at the club.

“It’s happened quite often there, believe it or not,” he explained. “It kind of happens progressively. The bank overflows and then it just floods the fairway. And then there’s so much water that it has nowhere to go.”

The club is set to host its 76th Invitational Four-Ball beginning Thursday, and Piecuch said there’s a chance the ninth hole will be played as a par 3 instead of a par 4 due to the flooding and wet conditions.

Other courses like Crumpin-Fox Club in Bernardston are trying to combat the wet conditions by offering walking specials Tuesday and Wednesday in hopes of keeping golf carts off the course.

Not all local courses were forced to close due to the weather, however.

Northfield Golf Club certainly picked the right time to implement new drainage projects. The course put in multiple new golf course irrigation and drainage systems last summer and they’ve noticed the difference this rainy year. Northfield was open Monday with no flooding issues on the course after the weekend storms.

With over four inches of rain coming down on the course over the weekend, it’s been forced to dry out but remained in good condition all things considered.

“It’s not bad out there at all,” Snow Hasanbasic said. “We’re just letting the water soak in now. It’s all playable, there are no bodies of water to avoid. We’ve been very lucky.”