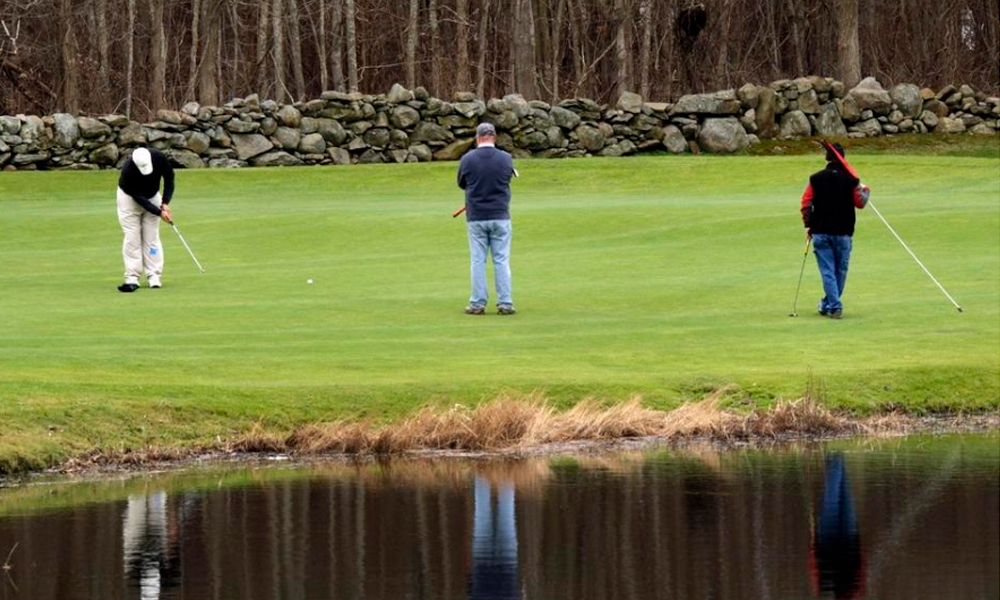 In retrospect, the Paskemansett Links in Dartmouth probably had no chance.

Sitting right on Route 6, roughly halfway between New Bedford and Fall River, the course was a sitting duck for developers turning Smith Mills into the retail hot spot that emerged as the downtowns of mid-size cities withered.

So it was that in the late 1960s, the 30-acre course was sold and developers built the North Dartmouth Mall, which became the retail anchor of the entire town.

For many, it was a sad development that removed a place that was a local legend — a place where golfers of all ages and backgrounds shared the course, made even more egalitarian by the very low fees it charged players, such as $20 for a season membership.

Because of a series of circumstances that have as much to do with the national economy and changing social norms as with the stagnation and decline in the golf industry, today a golf course doesn’t have to be in the firing line of retail development to be at risk.

The housing market is worlds away from where it once was, and over the decades following World War II, housing developments quickly ate up open space in the suburbs.

In those days, newly developed housing in Dartmouth was not prohibitively expensive.

In 1956 the Allendale Country Club was opened on Allen Street off Slocum Road, complementing the restricted New Bedford Country Club. There was enough available land, even at that, to build the Hawthorne Country Club on Tucker Road almost next door to Allendale in the 1970s.

In the town of Plainville, a 255-acre course, Heather Hill, was built, perhaps the largest golf club in the state. Now it is in peril because the owners want to build homes on the property.

The golf industry, if not dying, is suffering from the infliction of various injuries and social trends, The number of 18-hole rounds are dwindling even as the industry tries to promote 9-hole rounds as a way for busy people in a new century to save both time and money.

Far more courses are closing each year than are being opened. The National Golf Foundation calculates that a golf course closes in America every two days while just 11 new courses were opened in 2014.

Hawthorn was closed once, then reopened, and closed again last year, and now is gone to a hayfield with toasted greens and an iron gate even blocking the access to the banquet facility.

Allendale Country Club is the latest to be facing financial challenges. Its owners recently sought a modification of its open space tax agreement with Dartmouth to put some of the 160 acres into the private housing development market.

The town has responded by mobilizing Town Administrator David Cressman on a mission to make a deal to acquire Allendale and keep it going as a golf course and not let it go to seed, not that anyone is predicting that just yet. The residents at a recent meeting expressed full support of the town’s acquiring the course and lease it to a private operator.

By the time Town Meeting rolls around in June, Cressman hopes to reach a purchase and sales agreement with Allendale that voters will support. He developed an offer of $3.2 million to present to the club, but so far there hasn’t been a firm agreement of any kind.

The movement in the town government is frustrating for Allendale’s board and shareholders, according to board member Tom Meggison. With word going around that Allendale is in play, “We lost two substantial outings that pulled out and we lost two people who called up” after hearing the news, Meggison said.

He said the club’s bylaws require a two-thirds vote to do anything like a sale to the town, and he questions whether board members would be willing to entertain an offer by the town of just half of what the club is worth. “Do you think shareholders would sell out at half the value?” he said.

Meggison also said that the Chapter 61B process, an attempt to re-classify some vacant land to build housing, appears for now to be a non-starter, while any discussion of a purchase and sales agreement has barely gotten started.

Proponents of keeping Allendale a golf course can predict what will happen if the course shuts down, because it is happening at Hawthorne, where the cessation of landscaping has left a mess, disrupting what was a promising deal with Derek and Madelyn Maksy — who own and operate the Lakeville Country Club — to rejuvenate Hawthorne.

Maksy said that the problem involved the appraisals of the property, which led to the collapse of the whole deal with owner Kevin C. Santos. Santos did not return calls seeking comment.

Development pressure is happening in a big way at Plainville’s Heather Hills as well, as the owners figured they can build as many as 611 condos on the land where the golf course sits, such is the demand for relatively affordable housing in suburban Attleboro.

Other courses have experienced different fates. A Rhode Island company, Stonestreet Hospitality, which bought Bay Pointe in Onset in 2012 for $1.4 million, and has kept it going and made improvements, has pulled the club out of bankruptcy and spent a considerable sum to keep the golfing facilities in good shape. But while the course might have been saved, the other shoe dropped last year when it proposed 80 to 90 units of housing on land at Bay Pointe that is not used for golf.

In Acushnet, The Acushnet River Valley golf course was built by the town to preserve open space and develop a high-quality course that to date is running in the black and is even addressing some of the possible solutions to the slump in the golf market. In Mattapoisett at Reservation Country Club, which is said to be the oldest 9-hole links course left in the state, it has attracted so many golfers that memberships had to be capped, according to President Timothy Paul.

Nationally, certain regions that jumped into golf course and condo development in places like Florida, South Carolina and California, watched as the market shrank to the point that it could no longer support so many golf course developments. Today there are dozens that have gone neglected, with vacant housing units and and snapping turtles inhabiting the ponds.

SouthCoast may have come close to striking a balance, with perhaps most of the remaining courses in a good position to keep things running.

But the golf industry may have peaked when Tiger Woods was in his prime, before his marital infidelity and health problems doused the enthusiasm for the game that he had inspired in the 1990s. Golf lost its best salesman, TV viewership is way off and manufacturers like Nike have stopped making golf equipment, sticking with apparel instead, and a replacement is nowhere in sight.

Woods was good for golf in several ways. He stood out in a sport that is dominated by white men, and he drew in countless young golfers for whom he was a role model. But his problems were a body blow to the game. His dominance of the game from 1997 to 2008 tracked the industry’s fortunes perfectly. When he slipped, young players sold their clubs and went on to other things.

Golf has several challenges. The main one is the broadening of its appeal to young people and women. At the Acushnet River Valley course, Chiairman John Abaray Jr. said that the course management jumps through hoops to reach young people. What he says is the best public course south of Boston brings in such things as vocational high school tournaments, often attracting players from some distance who experience the course and come back again. Abaray said the course attracts golfers from the Blue Hills to Cape Cod.

He also said that weather can be a friend or foe. “In March most people want to get out there,” he said. So course operators wish for mild springs and falls, and summers that aren’t so hot that golfers stay home.

Efforts such as these are keeping Acushnet afloat, despite the troubling national trends. The National Golf Foundation said the game has gone from a high of 30.6 million golfers in 2003 to 24.7 million in 2014. Over 20 years, the number of golfers 18 to 34 has dwindled by 30 percent.

Golf clubs also face new social realities. Young people beginning their families look at an 18-hole round lasting five hours and walk away. They haven’t the time — or the money, often enough — to play such a sport that is so involved.

Clubs respond by promoting nine-hole courses and lessons for young people, and it’s true that nine-hole rounds are up. If they stay up, municipalities might not have to face the prospect of dealing with struggling or closed golf courses, in Dartmouth or anywhere.