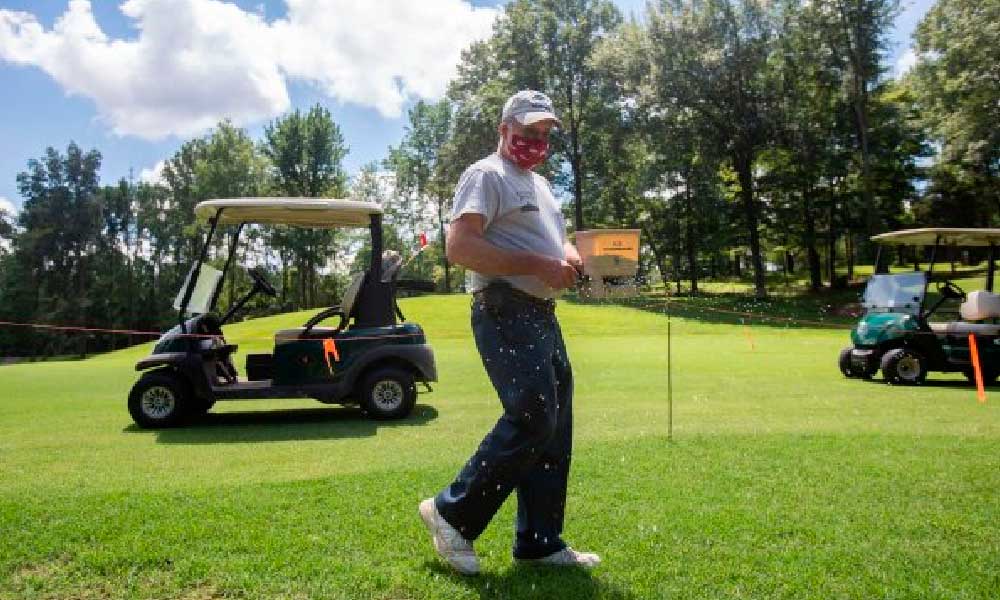 After nearly 40 years of manicuring greens and leading a maintenance team at Buffalo Trace Golf Course, the facility’s superintendent, Philip Volz, will soon tee off into retirement.

Never an avid golfer himself, the 57-year-old man nevertheless found fulfillment on that roughly 6,000-yard slice of Jasper land. And he took pride in transforming it into a welcoming destination for local players.

“A lot of memories of the good people I’ve worked with, that’s certainly something that you appreciate in your career,” Volz, who will retire on Aug. 14, said of what sticks out to him when he thinks back on his time at the course. “A lot of the golfers. There’s a lot of them that have been with us the entire time that I’ve been here.”

His career with the Jasper Park & Recreation Department began before he graduated high school. Back in 1978, he’d mow parks and align ball fields part-time as a member of the outfit’s summer crew. Around the time he finished school, the sport of golf began to take off, and an assistant superintendent position was added to the Buffalo Trace staff.

Volz got the gig in August of 1981 — back when the course featured only nine holes, its watering system valves needed to be cranked on and off by hand, and interconnected golf cart paths were not yet laid at the site.

“[I’ve] always been an outdoors sort of person,” he reflected. “Growing things has always been in my family. My mother was an avid gardener … I’ve had dirt under my fingernails from little on up. And the work really did appeal to me.”

That Volz had never golfed a game in his life before he started at the course didn’t stop him from diving in. He enjoys shooting around now, but even to this day, he said he doesn’t play a lot. His focus can drift from the game to the arena as he imagines ways to further refine and better his grounds.

The Jasper man took over as the Buffalo Trace superintendent five years after joining the team. At that time, the course’s back nine was under construction, and he seeded and grew in the expanded section before it opened for play in 1988.

Projects finished under the exiting superintendent’s watch include the upgrading of the course’s watering system, construction of the now-connected cart paths, completion of irrigation projects and clearing of trees that affected play. Resodding work and fairway renovations are also on that list — all on top of the day-to-day responsibilities of mowing, watering, fertilizing, and leading the team.

These all tie into the course’s growth. Volz describes Buffalo Trace’s recipe for success in words that put its customers first.

“Trying to give the golfers a good value for their money, for their membership,” Volz said of that formula. “Always trying to find someplace on the course where we can make an improvement, a little at a time, slowly, and not overextending ourselves. We just keep pecking away at it, and we eventually get the course [in] a better place.”

Kurt Uebelhor, manager of the pro shop at Buffalo Trace, has worked with Volz for 26 years and has known him personally for even longer. Uebelhor said Volz’s experience and knowledge will be missed when he leaves.

The manager also spoke of how Volz goes beyond his job description, often asking Uebelhor about his life and his family and showing how he genuinely cares for the people around him.

“I think he cares about everybody up here,” Uebelhor said. “That’s what kind of person Phil really is. He basically cares about the whole staff up here.”

Through his work with the course, Volz has learned to roll with the punches when things are going wrong. He learned that you need to put in the work to make things look nice. And he discovered the sense of satisfaction that comes when you can see the fruits of his labor.

Hearing compliments on his work from golfers over the years made the job worthwhile, he said. Volz knows he’ll miss the people he works with when he enters retirement next month. He will miss the atmosphere and scenery that Buffalo Trace fosters, too, and he’ll miss being able to chart his days through his work.

He is looking forward to dedicating more time to his yard and garden at his Jasper home, which is located on a 100-acre property. Fishing, hiking, hunting and outdoor activities, in general, are all on his post-work to-do list.

Volz’s replacement will be approved by the Jasper Park & Recreation Board.