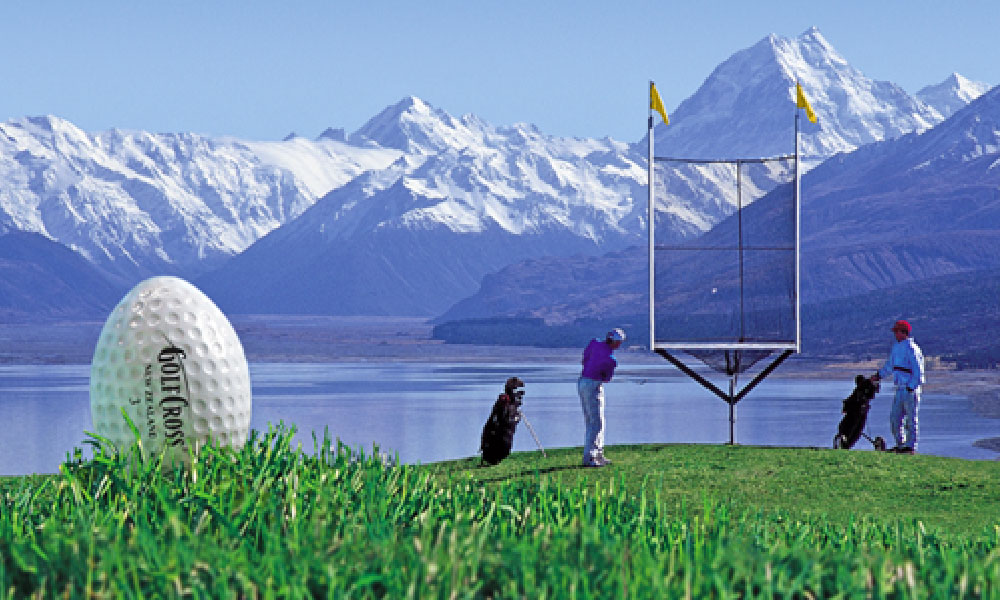 My friends Charlie and Becky had just returned from a five-week vacation in New Zealand. Besides a lifetime of wonderful memories, they brought back to Seattle a tiny football-shaped golf ball with dimples and a funky-looking tee to hold it.

This was my introduction to the New Zealand-invented game of GolfCross. Though requiring the use of golf clubs, there are several nuances that differentiate it from the one invented by the Scots (or, as has been argued by historians, the Dutch or Chinese).

How GolfCross Differs from Golf

Unlike golf, whose essence is a round ball rolling along the ground after being struck great distances, GolfCross® is strictly an air game. Its fairways are called “yards.” Holes, cups, and pins are replaced by “goals.” Every shot is hit off a tee, with no putting involved. Though a round consists of either nine or 18 holes, the game is based on smacking the ball through uprights similar to those found on American football fields or rugby pitches.

Because of its ellipsoidal shape, the flight of a GolfCross ball is more easily manipulated than the familiar round, dimpled sphere. It’s aerodynamically more stable than its relative. When you hit a GolfCross ball teed up at a tilted-back position like a football primed for kickoff, it goes straight. But angling the ball to either the left or right side of the tee allows players to easily hit a fade or draw.

That ability to control the ball flight is crucial in GolfCross, as the goals have only three positions. When faced with a narrow-angle from a side of the GolfCross goal, one had better be skilled at hooking or slicing for the ball to go through the goalposts to mark a good score.

Another vital element is positioning the ball in the “yard.” Because the goal has only three fixed positions, it’s crucial to put your ball in the proper place for the all-important approach to the goal. Land your ball inside the “yard” and you’re able to turn the goal to any one of the three positions for the widest possible target. When outside the “yard,” however, you have to lay on to get turning rights or attack the goal in its facing position by going for a field goal. If you’re not in the goal zone you could take a punt and try to go in over the top.

Though this terminology is a bit confounding, you’re still essentially playing golf. It’s just that the target is three-dimensional. Since the “yards” (fairways) are narrow, there’s only one way to score a goal. This is unlike golf where you can come from behind or the sides of a green to access the hole. It’s just like golf as scoring by the number of strokes taken is the same, the clubs are the same, and excellent shot-making breeds success.

GolfCross was first played in 1989 at Wanaka, N.Z., when Rolf Mills and George Studholme placed a few hastily erected goals on a sunny winter afternoon as part of a photoshoot for a piece about unusual New Zealand pastimes. The two fashioned some crude oval balls from polyester resin in their garage workshop. The primitive orbs were like hitting rocks, but the ball’s unique aerodynamic properties became quickly evident.

After the photoshoot, the game might have died then and there were it not for Studholme’s excitement about it. The former greenkeeper for the local golf club loved the idea that all of the expenses involved with building and maintaining putting greens could be eliminated with this new golf crossover. “You could play it very cheaply and just about anywhere – anywhere you can get a mower or a mob of sheep,” he said.

Studholme soon became fixated on improving the ball. He spent six years toying with different models. Ultimately, he found that the high-speed injection-molding manufacturing techniques used for mass-produced golf balls were too expensive to replicate for this new and arcane game. Fortunately, the small St. Andrews Golf Ball Company in Scotland donated some oversized balls that “exploded” out of the mold and had the appearance of a small rugby ball. While hardly the desired shape, they were one-piece balls that shared the properties of their golfing brethren.

Studholme contacted Joe Gibson, a local woodturner who began reshaping the “exploded” golf balls to slimmer dimensions on a lathe. Gibson frequently tested the spheroids as he altered them, finding he could propel them 150 yards. Yet with all the resizing, they became too small and unworkable.

Then along came two Englishmen from Birmingham, Peter Smewin and William Baird, who worked for Penfold Golf, one of the world’s oldest golf-ball makers. After several discussions and cajoling sessions with Studholme, and by now Wanaka residents Martin O’Connor and Burton Silver, Smewin and Baird decided to devote their spare time to creating a functional ball with proper specifications. After several failed prototypes, a one-piece, dimpled GolfCross ball finally became available in 1996.

What was lacking, though, was a goal that could handle the often ferocious winds that whip across New Zealand. Dominic Taylor, a young industrial designer who works in the country’s burgeoning film industry, came up with a brilliant design after numerous field trials. Modeled after trees that stay upright by shedding branches in high winds, the modern GolfCross goal features highly flexible branch-like stays that are tension-hinged so as to collapse in on themselves when the going gets tough.

What My American Friends Thought About GolfCross

Charlie and Becky came across GolfCross in Wanaka, a scenic town at the entrance to the delightfully named Mt. Aspiring National Park on New Zealand’s less-populated South Island. Nearby is a winery beside a large lake. Snowcapped mountains and glaciers loom in the background of this pastoral area which, as unbeknownst to my friends, is the site of the planet’s first-ever GolfCross course.

“We played in a sheep pasture owned by the Rippon Vineyard, an upscale winery and vineyard above the shores of Lake Wanaka,” Becky related. “Wanaka is a beautiful little town with stunning views of Mt. Aspiring and Lake Wanaka. I have misplaced our scorecard with yardages, but as I recall the distances of the holes were 90 to 350 meters over our nine-hole round.

“I hit my long shots well – straight and pretty good distance, but had trouble getting the ball into the net. It wasn’t until the 7th or 8th hole when Charlie shared with me the secret of getting the ball in the net – an 8 iron! I always chip with a wedge and was going over the goal. Charlie wasn’t as straight with the longer shots but killed me with his approaches! On the second hole I drilled a sheep, it ‘baaaa-ed’ and scampered off.”

As a devoted American golfer and an 8 handicap at that, Becky enjoyed her introduction to GolfCross. “The game was a blast – a hoot to be playing in a sheep pasture and a great memento of New Zealand, the land of many sheep!” she enthused. “Quite a good exercise as the course had a number of hills. I thought we picked up the technique pretty well. However, I would need some practice to get the hook and slice perfected. I left Charlie in charge of the rules; we played according to his rules.”

The Idaho native feels the game could find a home in the broad pasturelands of the U.S. “I think it’s fun for rural areas: places like Idaho and Montana,” she said. “It would also be fun in a big place like Discovery Park [near downtown Seattle] where there is plenty of open space.”

Becky also appreciated how long it took to play nine holes. “The round probably took one and a half hours. The most time-consuming part was to set up and balance the ball on the cupped tee.”

She was surprised by the small investment needed to “build” a course. “The expense of setting up and maintaining the course would be minimal – rocks to mark the tee boxes, the net for the goals. The grounds [where they played in New Zealand] had been cut by a hay mower and there were no greens. The pasture was dry land, with no irrigation system.”

Charlie, a dentist by trade, was similarly impressed. “The ball travels surprisingly well but does feel a little heavier [than a golf ball]. Our only departure from the rules was positioning the goal. It has only three fixed positions to choose from, so most shots would be from an angle. There is a pin sheet that shows you in advance what those three positions are and you need to hit your shot to the green accordingly.

“We played along with that somewhat, but it wasn’t really clear sometimes, so we would occasionally hold the goal in a ‘tweener’ position for our fellow player.”

The most active proponent of GolfCross is Burton Silver, one of the sport’s pioneers. Silver has written a beautifully illustrated and a photographed book called “New Zealand GolfCross.” He also created a small tract entitled “The Game at a Glance” that can be carried onto GolfCross courses for rules reference and the like. In addition, Silver operates www.golfcross.com, an excellent website that outlines the game, its rules, a glossary of terms, helpful playing tips, and related products visitors can buy.

If there is a “Johnny Appleseed” of GolfCross – “the game that lets you play like a pro and demands that you think line one, too” – Silver is it. Many thanks to Burton for both the information and photos, and to Charlie and Becky for their help in preparing this article.

Author’s Note: With several 2020 updates, this article originally appeared on Cybergolf.com in 2006.