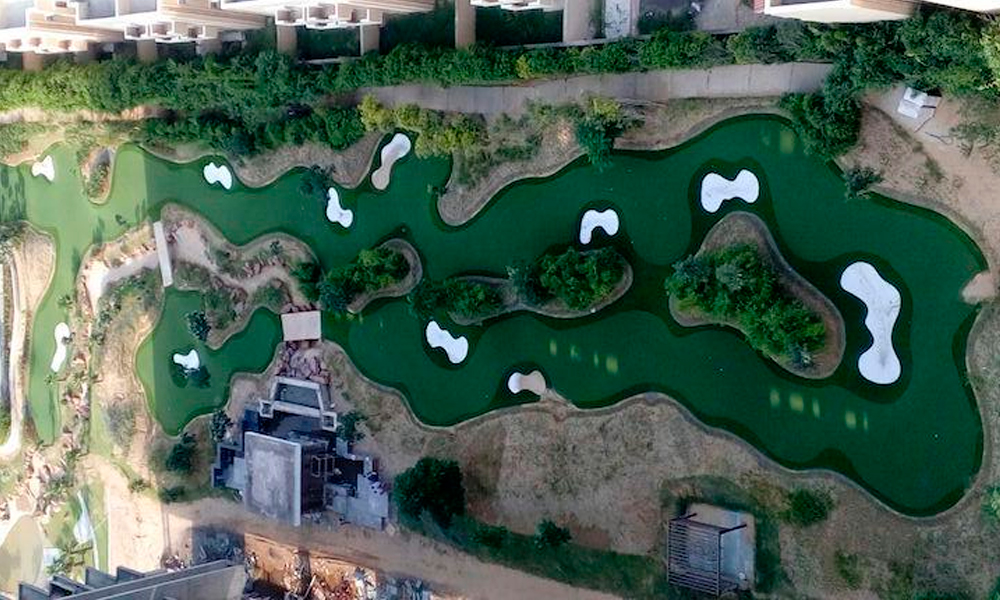 Golfplan partner Kevin Ramsey bends down to examine a seam in the 9th green at the M3M Club, his new project set to open here this fall, just north of the Delhi airport. Yes, a seam. When it opens this September, M3M will not only be India’s newest golf property; it will also be the first anywhere to deploy synthetic turf through the green.

The 9-hole, par-3 layout at M3M — in addition to its 9-hole putting course and driving range — are entirely “grassed” with a lush-green product produced by FieldTurf, the Calhoun, Ga.-based subsidiary of the French company, Tarkett Inc., that has supplied its product to some 7,000 sports facilities worldwide.

Golf has been far slower than football and soccer to adopt FieldTurf as a viable alternative to organic turf. But the M3M project illustrates why its advent in the golf context is no longer a question of why, but rather a when and where.

“We went synthetic here for a lot of reasons,” says Ramsey, who cranes his neck to peer up at one of M3M’s two 35-storey towers, just as the late-afternoon sun ducks behind it. “That’s one reason right there: The shade created by these high-rises would have made it quite difficult to grow and maintain healthy turf here, no matter what varietal was chosen.

“But mainly, it’s for the residents. This FieldTurf will always look good. There will be no dormancy, no off-color in the off-season. The trees will lose their leaves but residents will always look down from the 33rd floor and see this beautiful, lush-green courtyard with pins — 100 percent of the time.”

While one FieldTurf competitor, Southwest Greens, has furnished product to the 6-hole short course at the Hong Kong Golf & Tennis Academy (and to an in-range practice loop at Golf Up, soon to debut in St. Tropez, France), the M3M project will debut as golf’s first fully synthetic, stand-alone 9. This makes pioneers of Ramsey and his firm, Santa Rosa, California-based Golfplan. Again. It’s a mantle to which Ramsey and partner Golfplan, Dave Dale, are well accustomed.

For the past 40 years, in countries new to the game of golf, Golfplan has often been the first to arrive and the last to leave. All told, the firm has created more than 217 courses in 32 different countries (counting renovations, it’s 75 countries). In many of these far-flung locations — Tunisia, Bali, Myanmar, Uganda, Mongolia, Nepal — Golfplan (www.golfplan.com) created the very first modern golf course, or the first public course. This sort of sustained productivity and innovation in the face of otherwise flagging development climates is one reason GolfInc. magazine named Dale and Ramsey among the Top 10 Most Powerful People in Asian Golf for 2016 — the only course designers on a list dominated by developers, management company executives and tech gurus.

That influence is evident here in India, where much golf has been proposed but precious little has actually been created. Where it has come to fruition, Golfplan is in large part responsible: Ramsey opened Zion Hills GC in Bangalore back in 2012. Two years later, he christened Edgewater GC at Aavisa, near Chennai, and today, to go along with M3M, his firm is in the midst of developing additional projects in Bangalore and Goa.

“Prepping the subgrade for golf holes designed for FieldTurf is pretty similar to the normal course of events,” said Ramsey, who arrived in Delhi for this M3M site visit after meetings in Turkey and the former Soviet Republic of Georgia. (In Turkey, Golfplan will design the country’s first municipal course, at Samsun on the Black Sea; in Georgia, Ramsey will design the country’s very first course of international standard.)

“Here at M3M we installed a compacted sub-layer comprised of two separate gravels, then a sand layer and shock pad. It’s all been perimeter drained. You don’t want herringbone drainage because if that settles in an awkward way, you’d have to peel back the turf, address the issue and re-stitch. With this medium, it’s all about minimizing seams.

“Above the shock pad goes the FieldTurf itself, with its ‘blades’ of grass some 2.5 to 3 inches long. A mixture of crumb rubber and sand is sifted in there to create the height of cut you want. Water percolates through to a certain extent but mainly it sheet-drains to the perimeter drainage points.”

The seam on no. 9 at M3M, a lovely mid-length par-3 to a raised green guarded by a series of fronting bunkers, has been knitted together just fine apparently. Ramsey checks another on the far side of the putting surface and looks back down the fairway to the tee. He nods his head in approval. The architect has developed what appears to be a grudging respect for the synthetic surface he has deployed here.

“I’ve hit off the stuff. I’ve played shots into these greens — it performs like real turf and it looks great,” he says. “The greens were designed just like they would on a championship course, a bit smaller maybe — because these are all par-3s. But the green contour is real.”

Ramsey said he would not classify himself as some sort a synthetic evangelist — just a course development practitioner open to all reasonable options. The Golfplan-designed Club at Nine Bridges (ranked among the world top 50 and scheduled to host the U.S. PGA Tour’s CJ Cup this October) has used synthetic agents in rebuilding its revetted bunker walls.

“But no one there is contemplating synthetic turf options, and that makes sense, too,” Ramsey said, adding that all the bunkering is traditional on the par-3 course; on the putting course, these hazards are merely sand-colored FieldTurf. “But here in India? I spend a lot of time in Singapore and the Philippines, and the dry season here in Delhi is one of the hottest places I’ve ever experienced. It was 48 degrees during one recent visit — that’s 118 degrees Fahrenheit! You’d have a very difficult time maintaining year-round turf in this climate, with all this shade, to say nothing of the water that it would require.

“Taking into account what is a pretty harsh climate, we expect a lifespan of 15-20 years for the FieldTurf at M3M. Will it be exactly like grass? No. But we couldn’t have done this even 10 years ago. Just in that space of time, we’ve seen an amazing leap forward in quality.”

Ramsey says it’s no coincidence that pioneering projects are taking shape in India, or Hong Kong, as opposed to North America.

“Asians in particular appreciate the garden aspect of golf, as opposed to the brown, naturally rough-hewn golf most prized in the West,” he explained. “And it really is a garden we’ve created here amid the high rises. You saw the creek and waterfall we created on the putting course — that’s a very attractive water feature. It’s just like any other design work, where you’re combining the strategies of playing the game with optimal aesthetics.

“The target market here is the accomplished golfer who buys a unit here at M3M because there’s this beautiful amenity just out the front door. Maybe he’s the father of the family who plays most of his golf down the road at DLF. But maybe he gets his sons and daughters interested in the game right here. That would be perfect.”