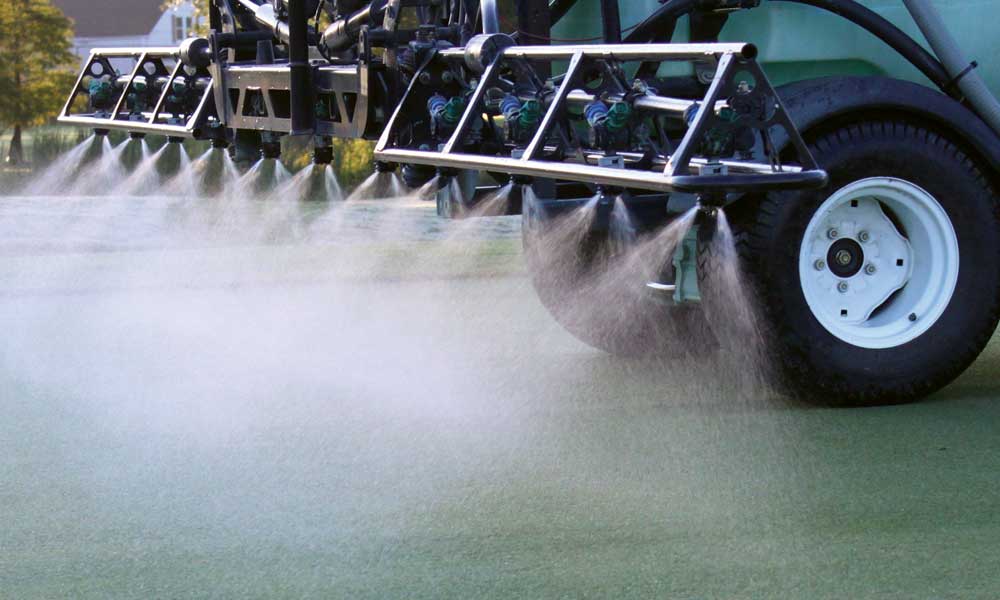 The TurboDrop® nozzle was developed over 20 years ago to improve coverage, reduce runoff, and maximize efficiency with plant protection materials. Its combination of excellent drift control and uniform spray coverage make it the perfect choice for the myriad of spray applications on the golf course.

Nozzle selection can be critical when it comes to getting maximum efficacy from expensive application products. Most golf course sprayers come with either extended range flat fan nozzles or wide angle flood nozzles.

The TurboDrop Venturi nozzle combines the drift control of a coarse spray (like the flood nozzle) with the uniform spray distribution of a flat fan nozzle. As a result, the TurboDrop nozzle may be used in more adverse operating conditions and still deliver on-target performance.

The droplet spectrum is not overly coarse or too fine, and the air-filled droplets have proven to be effective for both contact and systemic chemicals. Most golf courses using the TurboDrop nozzle use it for every single application on the fairways, greens, and rough.

With the TurboDrop the initial metering orifice takes most of the pressure, protecting the life of the pattern orifice to provide extended pattern uniformity and prevent striping, which can be a major issue on golf course greens.

The TurboDrop utilizes a large mixing chamber and a patented pulsation dampener to produce a more uniform spray droplet spectrum made up of air-energized droplets. The air inclusion is important in that it changes the physics of the spray droplet. Air-filled droplets tend to spread out or collapse on the leaf surface rather than just running off, like big, solid-liquid droplets do. Additionally, having air-filled droplets means that there are more droplets in the spray to hit the intended target.

The Asymmetric DualFan nozzle, introduced by Greenleaf in 2011, is the next step in the evolution of our first twin fan nozzle introduced in 2005. These nozzles split the flow in half, directing it in two 110° fan patterns, targeting the leaf blade from two different angles.

The split pattern also allows for greater variations in boom height. Between 12” and 22” from the turf, the Asymmetric DualFan nozzle has less than 5%variability in spray distribution across the boom length, preventing the striping effect often seen when booms get too close or too far away from the spray target.

The TurboDrop DualFan is quickly becoming the standard by which all turf spray nozzles are measured. The combination of coverage, penetration and drift control make it the most versatile and effective choice for all golf course applications.